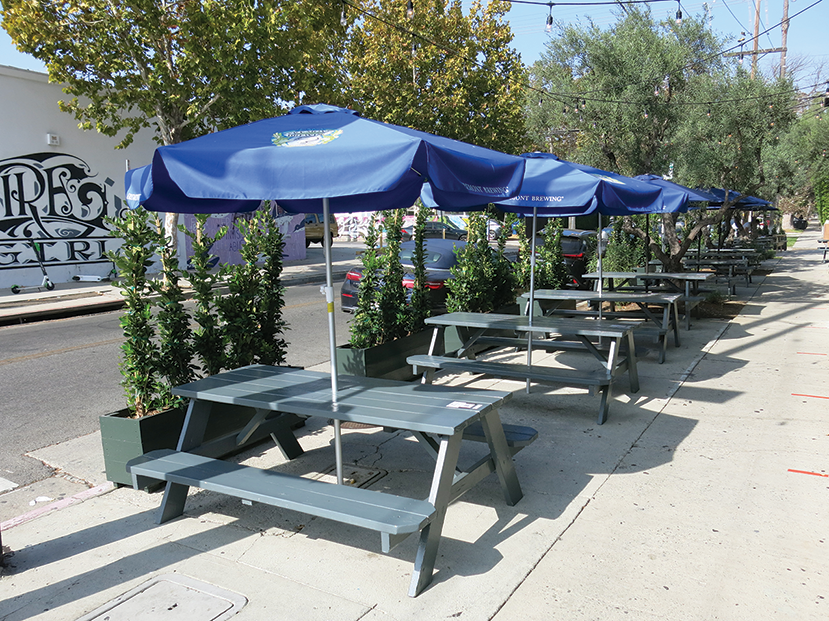 Outdoor dining in Los Angeles County is prohibited due to the state’s stay-at-home order, but the county’s restrictions were overturned in court. (photo by Cameron Kiszla)

Chalfant’s reasoning in deciding a lawsuit filed by the California Restaurant Association – such as a lack of data proving that outdoor dining significantly contributes to the spread of COVID-19 – echoed some of the statements made by members of the Beverly Hills City Council during their Dec. 1 discussion opposing the county’s prohibition of outdoor dining.

Though there is a desire by some council members to create a separate public health department for Beverly Hills – or at least a department for a handful of nearby cities that would also seek to leave the jurisdiction of the Los Angeles County Department of Public Health – significant hurdles remain. The council members raised multiple questions they would like answered before discussions could continue. Those questions will be explored by Deputy City Manager Gabriella Yap.

One of the most prominent topics during the discussion was funding. The Los Angeles County Department of Public Health is funded through taxes, and it remains unclear if the city would be able to recapture the funding that goes to the county’s health department if the city were to create its own, Yap said.

“I have to believe that somewhere embedded in this equation is our cost for public health,” said Councilman Julian Gold, a proponent of the idea. “Not only should we figure out what that whole number is, but how they break that down, so if we decide to move forward and there are certain services we can provide, we can figure out what we’d still be paying the county and what our cost would be.”

City staff will also investigate whether the city could assert responsibility over particular services handled by the county – everything from disease control to statistics and laboratory services to family planning – or if the city would have to take on all of those responsibilities or contract an outside organization to do so. If the city has to assume all such responsibilities, Gold said he’s “not sure there would be much benefit at all” to breaking away.

“I think it would be difficult and expensive for us to absorb them all, vector control and animal control for that matter, some of the tracing things … As supportive as I am, I think we have to be realistic in terms of what our abilities to achieve this are … We need to be mindful of the fact that this is the kind of thing that could cost a ton of money, as well as resources and staff, if we want to do it well,” Gold said.

“We want to be among the healthiest cities in the world … I think it’s a tremendous priority, and I think we need to explore this, and not only explore it, but make it happen,” Bosse said.

The other council members, however, were not as fervently in support of the idea. Councilman John Mirisch, who on Dec. 1 criticized portions of the discussion, reiterated his stance that creating a separate health department from the county would be “a knee-jerk overreaction.”

“Nobody is a bigger believer in local control that I am, but this is one element where we should be looking to act in a countywide manner and avoid Balkanization … It’s going to be extremely expensive. We know we don’t have economy of scale. You lose that [with fewer constituents],” Mirisch said.

“Public health is something with which you’d want coordinated actions … It’s true that one size does not fit all, but at the same time, you’d want regional cooperation … I do not see this as a high current priority for us … We’d be better off spending our time, effort, expertise on things to promote [public health] than we would building a bureaucracy,” Wunderlich said.

While the discussion will continue with more information in the future, Mayor Lester Friedman reiterated that while the conversation began in response to the county’s restrictions, those rules have already been overturned by the court.

“In essence, the county’s order is going to expire. They are not going to be permitted to reinstate that county order until they do the research and have the data presented. However, it’s a moot point right now because the state order takes over and everything is shut down anyway,” Friedman said.

In the meantime, local chambers of commerce are coming together on Saturday, Dec. 12, to march in favor of allowing businesses to reopen safely. The march, which begins at noon at the TCL Chinese Theatre, 6925 Hollywood Blvd., will require mask-wearing and physical distancing, and supporters are encouraged to wear green in support of the movement. Participating organizations include the West Hollywood, Beverly Hills and Hollywood chambers of commerce.

Rana Ghadban, president and CEO of the Hollywood Chamber of Commerce, said the court ruling against the county was a good first step, but the state restrictions on outdoor dining should also change.

“If the county didn’t have data to support the shutdown of outdoor dining, I don’t know how the state does,” Ghadban said.

The coalition of approximately 40 business organizations are hoping to lobby Gov. Gavin Newsom and other state leaders to affect change, and the Dec. 12 march aims to get their attention.

“We’re doing everything we can to ensure that everyone is socially distant, wears masks and is very considerate of the seriousness of the pandemic, but at the same time express our frustration as a business community and how our state and county have handled this order, and how impacted thousands and thousands of people’s livelihoods are,” Ghadban said.