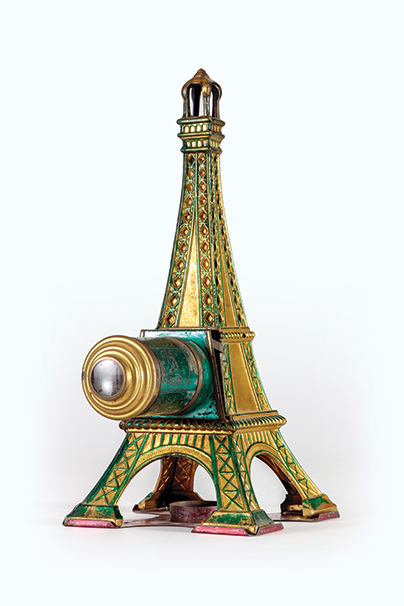 Exhibits at the Academy Museum of Motion Pictures include the Eiffel Tower magic lantern by Louis Aubert, made of tin, paint, steel and glass in Paris circa 1890. The lantern is from the Richard Balzer Collection and is a gift of Patricia S. Bellinger. (photo by Joshua White/JW Pictures/©Academy Museum Foundation)

Bill Kramer, director and president of the Academy Museum of Motion Pictures in Los Angeles, recently announced that the new institution has exceeded its pre-opening fundraising campaign goal of $388 million. This total encompasses capital gifts, endowments, funding for education programs and other special gifts. A donation from Laika, the stop-motion animation studio, moved the museum over the finish line, closing out a campaign that was launched in 2012. The campaign is headed by chair Bob Iger and co-chairs Annette Bening and Tom Hanks.

More than 13,000 donors contributed to the Campaign for the Academy Museum, with gifts coming from individuals, corporations, foundations and government entities. Cheryl and Haim Saban made the largest contribution with a transformative $50 million gift for which the Saban Building (formerly a May Company department store) was named.

“This is a great day for the Academy Museum and the entire world of film,” campaign chair Bob Iger said. “Thanks to the wonderful generosity of a broad community of donors, and to the commitment of co-chairs Annette Bening and Tom Hanks, we have proudly achieved our goal. The way ahead is clear, as we move at full speed toward an unforgettable grand opening in April 2021.”

“Closing this fundraising campaign is an important and exciting milestone for the Academy Museum,” Kramer said. “We are deeply grateful to our campaign leadership and to our trustees, donors and partners who have made important commitments to the campaign. Their support is helping to make the Academy’s long-held dream of building the world’s premier film museum a reality.”

Newly named at the Academy Museum is the Laika Gallery, dedicated to special collections, which will debut with “The Path to Cinema: Highlights from the Richard Balzer Collection.” This exhibition will showcase the world’s foremost collection pre-cinema artifacts. Metro Goldwyn Mayer is providing support for the museum’s core exhibition, “Stories of Cinema.”

New donors to the Pillar Campaign, co-chaired by museum trustees Laura Dern and Kimberly Steward, which names the support columns in the Saban Building, include Julia and Ken Gouw in honor of Miyoshi Umeki, the Oneida Indian Nation, New York in honor of Native American musician and advocate Buffy Sainte-Marie as well as Kimberly Steward and K Period Media in honor of Hattie McDaniel.

The Getty presents ‘The Black Index’ in January