A playlist that keeps on giving in ‘The Prom’ 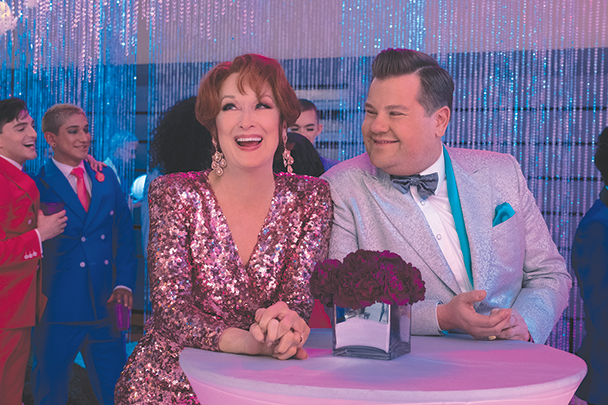 Meryl Streep and James Corden join a stellar cast in “The Prom,” a memorable musical adaptation of the Tony-nominated Broadway show. (photo courtesy of Netflix)

A good musical is life-giving. “Singin’ in the Rain,” “The Sound of Music,” even modern gem “Moulin Rouge” – a good musical experience on screen lasts forever. Honestly, Netflix’s “The Prom,” an adaptation of the Tony-nominated Broadway show, might not survive the test of time, but it embraces the wackiest elements.

In a small Indiana town, a lesbian high schooler Emma (Jo Ellen Pellman) receives the ire of a classmates when her petition to bring a female date prompts the PTA to cancel the dance instead of comply. Setting the story in Vice President Mike Pence’s state is a nice touch, a biting reminder that basic human decencies like dating whomever you want are still weaponized.

Meanwhile, some white liberals in New York face a dilemma. Broadway stars Dee Dee (Meryl Streep) and Barry (James Corden) become untouchable following a host of bad reviews. They need a cause, some good PR to help them appear likable once more. Co-performer Angie (Nicole Kidman) quickly locates Emma’s story on social media. Armed with another recently unemployed showman Trent (Andrew Rannells, of “Book of Mormon” fame), they amplify a cause with very little concern for the teen it affects. At least at first.

Along for the ride, Keegan-Michael Key, as Principal Tom, attempts a more modest role, a far cry from his comedic gold on “Key and Peele.” And Kerry Washington plays primary villain Mrs. Greene, head of the PTA, an all-around stand-in for all things homophobic, hiding her vile actions under euphemisms like morality and comfort.

This is Streep’s best musical performance. The songs fit her range and demeanor far better than any of her previous forays into the genre. Not shocking, Rannells steals the show, especially during a mall number exploring religious contradictions in “Love Thy Neighbor.” Even Kidman reminds the populace why she owns any role she takes.

But the real standout here is Pellman, who rightly enjoys the catchiest numbers in the film. She plays Emma effectively as a hesitant heroine forced into the limelight because of who she is, but she shines during those tunes. Emma leads a touching song with others like her across social media, exemplifying how online spaces belong to more than just valid trolls.

Perhaps “The Prom’s” strengths entirely hail from the stage show. That works. Each of the 17 songs shine, complete with stellar choreography, staging and performances. Sorry, Oscar-nom “Les Miz” can’t touch the polished look of this one. The story’s finer points, however, remain a point of contention, rightly so. 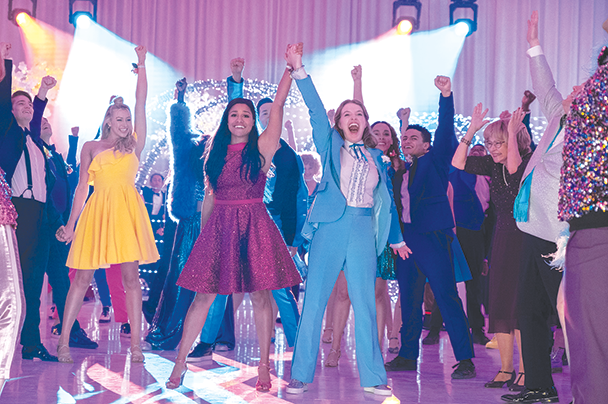 Ariana DeBose, left, and Jo Ellen Pellman are stand-outs in “The Prom.” (photo courtesy of Netflix)

As others have already noted, the most problematic aspect of “The Prom” is Corden’s performance. He inconsistently portrays a flamboyant character, cranking those choices up during chatter on fashion and omitting them entirely when more emotional moments occur. The implication of this choice is horrifying, compounded by the high probability that Corden didn’t research the role or deeply consider his character’s motivations.

Another challenge is inherent to most musicals’ affinity for happy endings. Some characters (OK, one in particular, while there’s an argument for a second) don’t earn the grace given to them come the finale. Grace and forgiveness are powerful tools, but too many films undermine them for the sake of closure. Smiles might result, but authenticity takes a back seat, which is troubling in a film (and musical) that tackles something this important.

Those two pieces might be deal breakers. Why director Ryan Murphy (“Nip/Tuck,” “Eat Pray Love”), an openly gay filmmaker and TV producer, allows these things to occur is rather baffling, considering the more nuanced explorations of sexuality in his small screen work, from “Glee” and “American Horror Story” to “The Politician” and “Pose.”

“The Prom” won’t go down as one of the modern greats, instead falling somewhere in the neighborhood of 2007’s “Hairspray” and “Rock of Ages.” That said, it’s still better than “La La Land” (you heard me) and plenty of others, though wading through its more problematic bits damages what could have been something truly amazing.