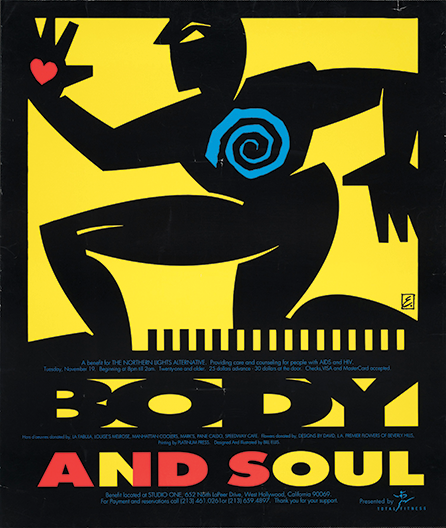 As part of its commemoration of World AIDS Day, West Hollywood is displaying historical posters and art related to HIV and AIDS at West Hollywood Park. (photo courtesy of ONE Archives at the USC Libraries)

World AIDS Day is Dec. 1, and the city of West Hollywood is planning several virtual events and commemorations to remember those lost to the crisis.

David Giugni, the city’s social services manager, said marking World AIDS Day is especially important for West Hollywood, a city known for its connection with the LGBT community, which has been especially hard-hit by HIV.

“In broad strokes, the city has been extraordinarily impacted by HIV. West Hollywood has the highest rate of community members living with HIV in L.A. County,” he said.

Mayor Lindsey Horvath added that the city “has been at the forefront of this fight ever since it began.”

“We all dedicate ourselves to this effort, and that’s what World AIDS day is, a recommitment to these efforts that started long ago,” she said.

This year, the city’s World AIDS Day events began with the installation of posters related to HIV and AIDS from the collection of ONE Archives at the USC Libraries, the largest repository of LGBT materials in the world, according to its website. The posters have been placed on the temporary fencing that was erected for construction at West Hollywood Park, and they will remain on display through the end of the year.

The city is also promoting AIDSWatch, a memorial to those who have died of AIDS, which will be displayed on WeHoTV from Friday, Nov. 27, through Tuesday, Dec. 1.

“It’s literally just a scroll of names of people – not just in West Hollywood, I think it’s national – people we’ve lost to HIV and AIDS. It’s a powerful reminder of our shared experience in West Hollywood and the greater community. It’s a very simple kind of project but once you tune in, it pulls you in and it’s really powerful,” Giugni said.

On Dec. 1, the Alliance for Housing and Healing will place flowers on the memorial plaques on Santa Monica Boulevard, and the city will also honor those who provide assistance to people living with HIV and AIDS with the 20th annual Paul Andrew Starke Warrior Awards. The event will be held at 7 p.m. on Zoom and on the city’s YouTube channel, and this year, the honorees are Chris Aguilar, of the Los Angeles LGBT Center; Garry Bowie, of Being Alive; Liza Marie Ceballos, of the TransLatin@ Coalition; Cheryl Hoffman, of the Friends Research Institute; Emmanuel Sanchez-Ramos, of APLA Health; and Spencer Shelton, of the AIDS Healthcare Foundation.

Horvath noted that the Warrior Awards will be particularly significant this year with the ongoing coronavirus pandemic.

“The awards ceremony is always incredibly moving, because inevitably there are stories of what our community’s experience was with the infection rate among gay men causing a high number of deaths in the community. Today, we have a whole new global health pandemic, and it’s certainly impacted our community,” she said.

In particular, one of this year’s honorees, Garry Bowie, is being honored posthumously after he lost his life to COVID-19 earlier this year.

“He dedicated his entire life to being in service to this cause, and to lose him to yet another health pandemic is heartbreaking,” Horvath said.

Giugni added that although “we’re in a very different place right now with HIV with effective medicines that have pretty much brought it to a manageable disease or health condition,” much can be learned from the HIV and AIDS crisis and put to use in how society is responding to the COVID-19 pandemic.

“We really go back and see the activism that occurred during the height of the pandemic, how that is still an important aspect of how we address COVID and address treatment, address how folks are treated who have COVID,” he said. “When people look at it now and they say, ‘Oh, HIV and World AIDS Day, that feels like a part of history,’ but it is very pertinent to what we’re experiencing now with COVID.”

For instance, Giugni said, “we really have to look at our disenfranchised communities.” While HIV and AIDS initially affected gay and bisexual men the most, today, many communities of color are most impacted, and “disparities in health care and access to services” became apparent, he said.

“Again, with a disease such as COVID, our disenfranchised communities are most impacted. What did we learn? The gay community, with support from its allies, really forced the federal government to address HIV and push for an immediate response, and we see that need again with COVID,” Giugni said.

While federal help is sought, the city will also examine some of its own efforts during the Warrior Awards ceremony, as the city’s consultant Aaron Celious, director of research and strategy for the research firm Maroon Society, will provide an update on the West Hollywood HIV Zero Initiative.

Giugni said the five-year strategic plan is finishing its fourth year, and it aims to decrease HIV transmission, address disparities in health care, decrease the rate of progression for people living with HIV and decrease stigma for those living with HIV.

West Hollywood is seeking input on stigma of HIV through a survey. To participate, visit weho.org/services/social-services/hiv-aids-resources.

“That’s for folks to share where they encounter stigma, is it a result of living with HIV, how are you experiencing that? This is in order for us to attempt to address and lessen folks experiencing stigma,” Giugni said.