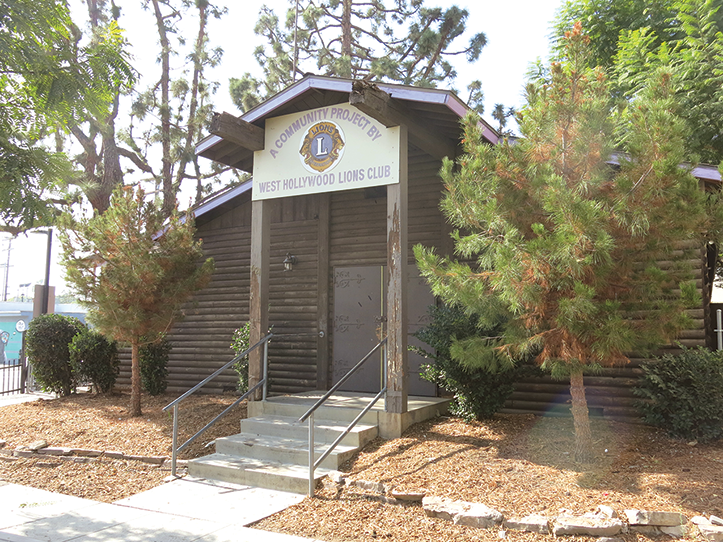 The Log Cabin still requires hundreds of thousands of dollars in upgrades before it can reopen for in-person meetings, even after the county lifts restrictions. (photo by Cameron Kiszla)

In-person 12-step meetings are set to resume in West Hollywood following a unanimous vote by the City Council on Nov. 2 approving a contract with the West Hollywood Recovery Center to use the parking structure at West Hollywood Park.  The city will be waiving all fees, including facility use fees.

While the initial six-month contract will end on May 2, 2021, the city can extend the lease on a month-to-month basis depending upon the impacts of the continued COVID-19 pandemic. According to the staff report, the city will terminate the agreement once the County of Los Angeles Public Health officer order permits indoor activity for support groups.

“This pandemic, coronavirus, has really ended up upending a lot of our work around sobriety and recovery,” Councilman John Duran said.

Duran, who on Thursday, Nov. 5, marks 24 years of sobriety, underscored how important it is to reignite the in-person fellowship around the meetings, which helps keep people sober.

Within the next two weeks, in-person outdoor addiction recovery support group meetings are scheduled to take place on the fifth level of the parking garage located at 625 N. San Vicente Blvd. Parking in the garage is currently much diminished as a result of ongoing construction to renovate the park, which is expected to reopen by the end of 2021.

“We have a serious issue with crystal meth in West Hollywood, primarily in the gay male community,” Duran said. “A lot of gay men start out with this just being a weekend party drug, and then it ends up taking their jobs, their relationships, their housing, their teeth and eventually their mental acuity. So it’s been heartbreaking to watch people get addicted to such a horrible, horrible drug.”

While the virtual meetings have helped many people remain sober, increasingly people are finding themselves relapsing due to the absence of in-person meetings.

“People are still on the Zoom meetings today, but the attendance every month decreases, and there are more and more stories of people relapsing, on alcohol, but more notoriously on crystal meth,” Duran said.

In partnership with the city, the Recovery Center has spent months trying to figure out a way to allow in-person meetings to safely take place in compliance with county regulations. As part of the Health Officer order, the county developed a reopening protocol for substance use disorder and mental health support groups that limits the total number of participants in the group, including group facilitators, to 10 people.

An initial consideration for holding meetings in the parking lot of the Log Cabin, even if tented, was decided against due to concerns related to anonymity. The city-owned parking lot on San Vicente Boulevard, which offers attendees four floors of parking below the meeting space, and also allows access to bathrooms on the rooftop, was determined to allow for sufficient anonymity to uphold the inherent promise embedded in Alcoholics Anonymous programs, according to Duran.

As indicated in the site plan, 50 parking stalls on the fifth floor will be utilized to accommodate two outdoor meeting areas and storage space. The meeting space will be cordoned off by water-filled barricades to prevent vehicular access and to ensure the safety of the participants.

Once in-person meetings are allowed to resume, Duran said that the Log Cabin would make several hundred thousand dollars worth of repairs in order to achieve Americans with Disabilities Act compliance. The Recovery Center had been set to take over operations of the Log Cabin via a sublease when the pandemic hit shortly after the city of West Hollywood purchased the property from Beverly Hills early this year. The Recovery Center currently also leases space from the city across the street from the Log Cabin to provide addiction recovery services, however, both facilities have been closed for in-person meetings since March 16.

Duran estimated that the city spends roughly half a million dollars annually on drug addiction and alcoholism recovery services, noting that the city purchased the building to further create a foundational structure for sobriety and recovery.

“We do all this not only because it’s good for the community, but to help achieve other goals – to prevent homelessness and to stop the spread of HIV and other STDs as well,” he said.