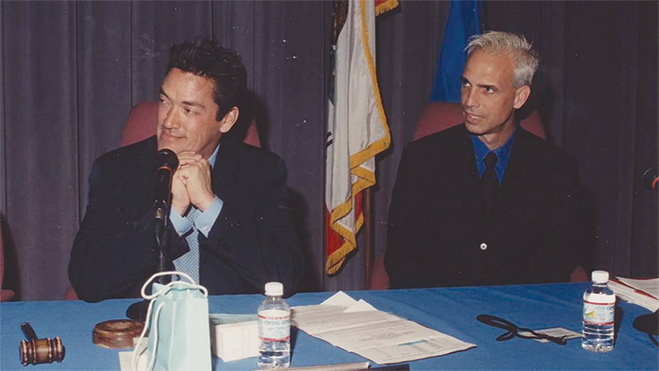 John Duran and John Heilman have served for more than 50 years combined on the West Hollywood City Council. (photo courtesy of the city of West Hollywood)

After defeat in their bids for reelection on Nov. 3, long-serving West Hollywood City Councilmen John Heilman and John Duran were honored by city staff, fellow council members, residents and elected officials on Nov. 16.

During the final full City Council meeting of their terms, Mayor Lindsey Horvath paid tribute to Duran, who served five terms on the City Council, and Heilman, who served all but a few months on the council since the city’s founding in 1984 and is currently serving as mayor pro tempore.

“It’s been extraordinary to serve with you … Certainly your indelible mark will be left on this city,” Horvath said.

Councilwoman Lauren Meister said despite early tension with Duran, they “found ways to work together and common ground,” and she praised Heilman for his “wicked sense of humor” and for the influence he had on her.

“[Heilman] taught me a lot over the years, not just the five and a half years that I’ve been on council, but the 17 years before that [when] I watched council meetings. Some things we have agreed on, some maybe not, but I will say [thanks for] everything that you’ve done for the city,” Meister said.

Councilman John D’Amico wished Duran and Heilman success in their future endeavors, and he thanked Duran for inspiring him with “big ideas.”

“When we think big and we shoot for the moon, sometimes we end up there, and it’s a good view back to Earth from there. I want to thank you for inspiring me to also have some gravitas around big ideas. Your willingness to continue to open yourself up to the public – sometimes they carry knives and sometimes they carry candy, but that’s also always been inspiring to me, because public service can be challenging and you always rose to the challenge and came through with an idea that I was always astonished with, right on time and rightly placed,” D’Amico said.

Other elected officials also virtually attended the meeting or submitted video remarks to add their memories and praise for Heilman and Duran.

“You both have been at the helm of West Hollywood when we saw huge leaps forward for LGBTQ equality, and big setbacks as well. You’ve both been fierce advocates for the city and its residents. I look forward to the next chapter in both of your journeys and know that you will continue to play a vital role in this city for years to come,” U.S. Rep. Adam Schiff (D-Burbank) said.

“[Heilman and Duran are] two incredible guys … who have thrown their personalities, their intelligence, their passion and their time into trying to lead the city of West Hollywood. There are so many things they’ve contributed to our community … The legacy that they leave behind is tremendous. West Hollywood is a much better place because of the leadership of John Duran and John Heilman,” state Sen. Ben Allen (D-Santa Monica) added.

“This is a weird moment for me and in some ways, strange for the city of West Hollywood, because both of them have been around for so long and have been such a stable presence in the city. It’s going to be unusual to see the city without them … Your departure will be felt for many years, but the legacy that you both have left behind will last forever in the records of the city of West Hollywood. Thank you both for your leadership and your friendship, and I wish you both well,” Prang said.

Two other contenders in the Nov. 3 election also called in to thank Heilman and Duran: Larry Block and Councilman-elect John Erickson.

“It’s our job, all of our jobs, to continue to fight for the city these two Johns helped to build and continue their legacy,” Block said.

Erickson, a former City Hall employee who also served as a deputy to former Councilwoman Abbe Land, said he learned from Duran and Heilman and plans to put that knowledge to use.

“I want to send you best wishes and I want to make sure that when I step into this role, know that I was trained and educated by some of the best. You both have given so much to this community,” Erickson said.

Richard Ayoub, executive director of Project Angel Food, said he will be dedicating a day of meals of Duran’s and Heilman’s choosing in their honor “so that our 2,300 clients will feel your love.”

Heilman and Duran declined to speak other than to thank those who spoke and the city staff members who assembled the tribute video that featured many photographs of them over the years. The outgoing council members said they will make their remarks on Dec. 7, when Erickson and Councilwoman-elect Sepi Shyne are sworn into office.