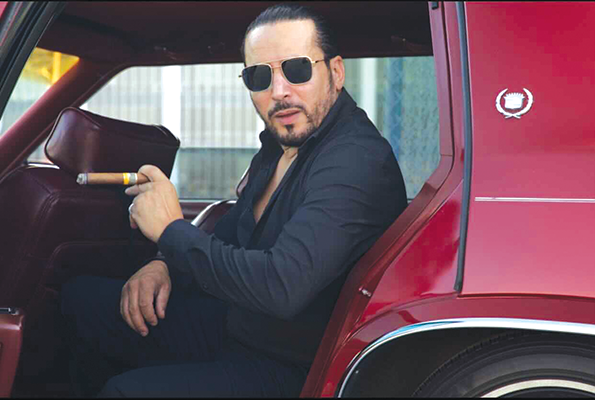 A West Hollywood resident is seeing years of difficulty and hard work turn into a fairy tale success befitting a Hollywood movie.

Jamal Antar was once homeless in Los Angeles, living out of his car, but now, he plays the role of the mob boss Arman in “French Connection,” due out next month on Amazon Prime Video.

Antar, 43, hails from the south of France and initially moved to Los Angeles in 2014 to work as a tour guide for French-speaking visitors. After his employer went bankrupt, Antar declined to move back across the Atlantic, instead choosing to pursue his show business dreams.

For nearly three years, Antar said he lived out of his car and kept a storage locker for his things.

“When I became homeless, sleeping in the car, it was a very hard time. I’d never been homeless in my entire life. I didn’t know that in L.A., you can’t sleep in the car and park on the street,” he said.

Over time and after interactions with LAPD officers, Antar learned where he could and could not park his car for the night, and how to adjust to the cool winter nights and hot summer mornings of Southern California. He also learned acting from Doug Warhit, who appeared in films like “Beverly Hills Cop” and “Look Who’s Talking.” Antar eventually started winning small roles in big productions like “NCIS: Los Angeles,” “The Politician” and “The Mandalorian.”

“I learned a lot [through] these smaller roles, because every day in acting, each actor learns something new. It helped me a lot, but on the side, I was taking some acting classes with Doug Warhit, one of the best coaches to be an actor … I learned a lot with him. I read all his books and learned a lot from them too,” Antar said.

“A friend of mine that knows him was searching about him and I checked him out. He’s very nice, a great person to work with. When I’m looking for a scene on set, I’m looking for more family than people to hire, people you can create something magical with, and Jamal, the ability to work with him and collaborate with him [helped] to create something wonderful,” Simon said.

Simon added that Antar’s perseverance is part of his appeal.

“One of the things I liked about him, he never gave up. He came to L.A. and [having] gone through the things he has gone through, to be able to be where he is right now, I think it’s a testament to a lot of young, independent creative artists that want to be in the industry,” Simon said.

Antar said he has found a niche playing “the bad guy, Italian Mafia, French Mafia, I play all that type of character,” and he’s thrilled to be receiving more work to continue pursuing his dream, including the second season of “French Connection.”

“It’s not about making money. It’s about every day, doing what you love,” he said.