‘Violins of Hope’ play online from the Soraya 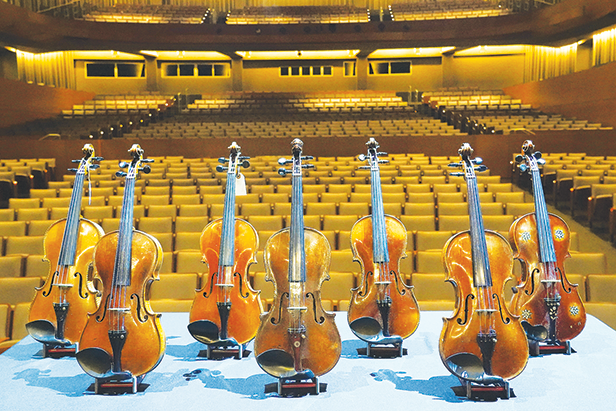 The “Violins of Hope” collection was on display at the Soraya before returning to Israel. (photo by Ricki Quinn/The Soraya)

Beginning Friday, Nov. 20 at 5 p.m., a “Violins of Hope” performance at the Soraya will be broadcast online.

“Violins of Hope” is an internationally renowned collection of over 60 stringed instruments rescued from the Holocaust and restored by second-generation violinmaker, Amnon Weinstein, and his son, Avshalom, in their shop in Tel Aviv. Violins in the collection were played in the concentration camps and ghettos, providing a source of comfort for some and a means of survival for others. Above all, the instruments represented strength and optimism for the future during mankind’s darkest hour. Wherever there was music, there was hope.

Last March, the collection was brought to Los Angeles for a month-long series of concerts, exhibits and student educational programming, most of which were suspended in response to the then growing worldwide health crisis.

Three violinists – Niv Ashkenazi, Lindsay Deutsch and Janice Mautner Markham – performed a video-taped farewell concert, on the instruments they were to play at various Southland “Violins of Hope” concerts, taped safely per COVID-19 regulations, before the violins were recently returned to Tel Aviv.

The Weinsteins, who founded the project, are Israeli luthiers who collect the instruments, refurbish them to concert quality, and bring them to communities all over the world. After a cancellation caused by the global pandemic, the “Violins of Hope” were secured under the Soraya stage for seven months until they were safely returned to the Weinsteins.

Although the instruments make beautiful museum pieces, at the heart of the “Violins of Hope” project is the Weinsteins’ commitment to ensuring that the instruments are played again as a way to honor musicians who originally owned the instruments. Susanne Reyto is the Chair of Violins of Hope, Los Angeles County and was responsible for working with Weinstein to bring the violins to the region.

The “Violins of Hope” have been played by virtuosos such as Shlomo Mintz and Daniel Hope, and revered ensembles such as the Berlin Philharmonic and the Cleveland Orchestra. Before the return, violinists Ashkenazi, Deutsch and Markham each chose an instrument that spoke to them and performed at the Soraya for the taped concert, which will be broadcast on Nov. 20.

In addition, in March 2020 just before shelter-at-home began, Soraya artist-in-residence Niv Ashkenazi conducted a 40-school tour and released a “Violins of Hope” album.

“Suspending Violins of Hope activities was heartbreaking for everyone who had come together around this extraordinary project – musicians, educators, philanthropists, elected officials, arts organizations, churches and synagogues, and the public at large,” Soraya Executive Director Thor Steingraber said.

“I was really struck with the pain of our two years’ worth of work that would not come to fruition. We decided capturing one final performance on film at the Soraya would allow us to share the comfort and beauty the violins provide when performed,” he added