The Wallis’ windows will transform with ‘Visions in Light’ on Nov. 19-29 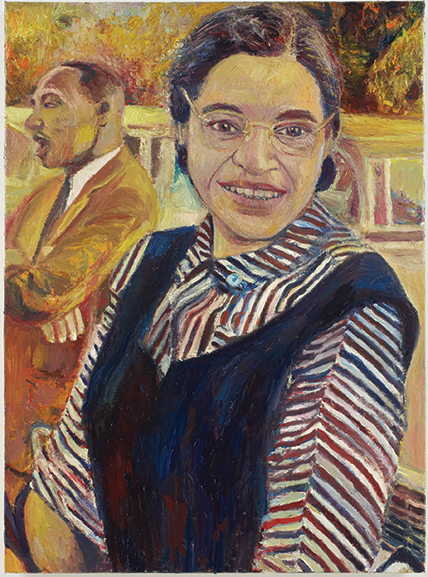 Keith Mayerson’s “Rosa Parks and Martin Luther King, Jr.,” (2006), is one of the artworks featured in the “Visions in Light: Windows on The Wallis” exhibit. (photo courtesy of the city of Keith Mayerson)

TZ Projects, the city of Beverly Hills and Wallis Annenberg Center for the Performing Arts have announced the upcoming launch of “Visions in Light: Windows on The Wallis” on display nightly from Thursday, Nov. 19, through Sunday, Nov. 29, from 8 p.m. to 11 p.m.

“‘Visions in Light: Windows on The Wallis’ is concerned with the power of art and culture to speak for a diverse humanity,” said TZ Projects producers Torie Zalben and Liana Weston. “The show, a video display, comprises various media, still and moving, projected onto the windows of The Wallis Annenberg Center for the Performing Arts. The windows serve not only to present the show physically, but also to stand metaphorically for seeing beyond one’s own point of view. Art thus becomes a tool for justice and harmony.”

“This is a moment for transition in American Society,” Frank said. “Art is reflective of its environment, and these featured works echo the sentiment of our nation’s collective soul.”

“Visions in Light:  Windows on The Wallis” is part of the Embrace and Celebrate Culture initiative, a new citywide inter-commission collaboration to celebrate diversity and create a greater culture of inclusion, equity and belonging in Beverly Hills. Deborah Frank and Stephanie Vahn, of the Arts and Culture Commission, and Annette Saleh and Karen Popovich Levyn, of the Human Relations Commission, are working together to find relevant ways to showcase global arts and cultural art forms; support local artists, arts and service organizations; and honor community-based individuals and philanthropists.

“This is a wonderful venue to commemorate diverse humanity in Beverly Hills,” Levyn said. “The collaboration of the inter-commissions, the Arts and Culture and the Human Relations commissions are an exciting joint alliance to continue to embrace civility, diversity and inclusion in Beverly Hills.”