‘The Queen’s Gambit’ elevates chess to its rightful place 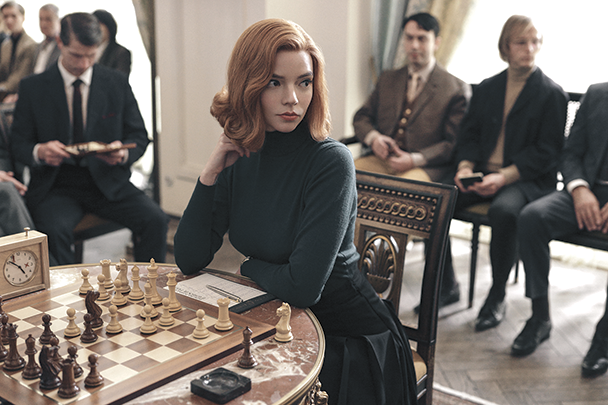 Anya Taylor-Joy portrays Beth Harmon, who has an incomparable command of chess, in “The Queen’s Gambit.” (photo courtesy of Netflix)

Good writing embarks on the unknown, domestic and intergalactic. Don’t condescend. Don’t generalize. “The Queen’s Gambit” understands that, presenting a high-stakes mid-century series equally involved in game tactics and human drama. Frankly, chess has never felt this significant, at least in the public eye this century.

At a young age, Beth Harmon (played by Isla Johnston in her pre-teen years) endures girlhood in an orphanage that shares more in common with a mental institution than an ethical childcare facility. Tranquilizers are standard for all ages. Admins just can’t allow girls to act up like boys.

Beth cares little for the gendered activities surrounding her, but she obsesses over a game the custodian Mr. Shaibel (Bill Camp) plays by himself in the basement. She knows nothing about it, but those 64 squares on a board accent her nightly tranq trips. The ceiling morphs into a board riddled with various unnamed pieces dancing from A6 to E2.

Eventually Beth, now older (Anya Taylor-Joy), finds a mother in Alma Wheatley (Marielle Heller), who exploits Beth’s emerging chess abilities. Their arrangement begins more maternal, but adopted mom’s many challenges prevent a more stable relationship from taking root. And so, they embark on a road of competitive gaming to pay the bills.

While “The Queen’s Gambit” explores the world of competitive chess, it’s a character piece at heart. Luckily, Taylor-Joy is magnificent, presenting a complex character taught to “conceal, don’t feel,” to bring “Frozen’s” bleak creed into live action. This performance is sure to win big come awards season, but Taylor-Joy has an established history on screens, big and small.

She broke out in 2015’s “The Witch,” riding the horror train, along with various period roles like “Emma,” earlier this year. She even returned to the big screen a few months ago in the last “X-Men” film produced prior and then during Disney’s acquisition of 20th Century Fox’s critically panned “The New Mutants.”

That didn’t hurt her now; Taylor-Joy will only lavish in more profound and rich stories going forward, including as a young Furiosa in a “Mad Max: Fury Road” prequel. But it’s hard to imagine any of that topping her performance here, and she owes at least something to writer-director Scott Frank.

In the hands of a lesser writer, “The Queen’s Gambit” would spend more time demanding viewers accept Beth’s incomparable command of the board without bothering to do any homework on play (see “science” in any disaster actioner). Not so here. From openings to end game (take a look at episode names for more Easter eggs on chess key terms), chess research and related jargon results in a story more akin to a Ken Burns production than something more watered down.

Frank (creator of Netflix’s “Godless”), who wrote and directed the whole show, treats each entry like a sequence in a uniform composition. Credits separating episode could easily swap out with fades to black or immediate transitions, morphing this miniseries into a long, but never dull, theatric experience.

“The Queen’s Gambit” is a gorgeous thanks to the technical mastery of various divisions: Gabriele Binder’s costume design, Uli Hanisch’s production design and cinematography by Steven Meizler. A special shout out belongs to editor Michelle Tesoro (“When They See Us,” “On the Basis of Sex”) for splicing this series in ways that challenge the assumed primacy of chronology.

For all its aesthetic magic, season two might not be on the horizon. Billed as a limited series (who knows how that differs from a miniseries), “The Queen’s Gambit” provides a clear ending – an oh-so satisfying one, at that. But hitting No. 1 on the Netflix top 10 for the U.S. might change things.

That boded well for other series like “Fargo” and “True Detective,” rebranded as anthologies following their inaugural success. Then again, HBO’s “Watchmen” reevaluated this label toward the end, considering its ending more final, despite critical and mass success.

So it could return if all parties involved so desire, but who knows? For now, “The Queen’s Gambit” is one of the few of joys 2020 has to offer. Thank chess. Thank Frank Scott. Thank Anya Taylor-Joy. Thank Netflix. Regardless, prepare to cry over chess and lost innocence; perhaps they’re the same thing.

Subway work keeps pace above and below ground