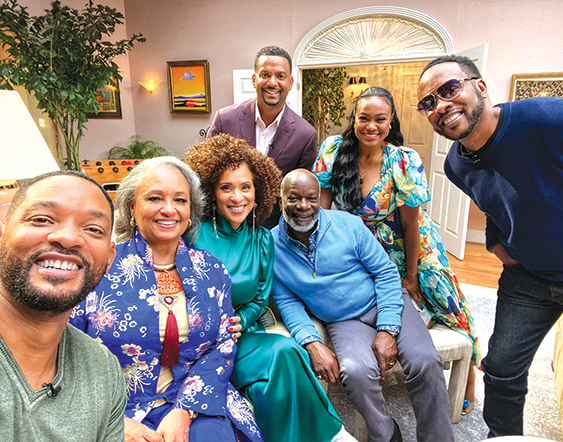 Most of the memorable cast led by Will Smith, left, returned for “The Fresh Prince of Bel-Air Reunion.” (photo courtesy of HBO Max)

In a year of media limbo, nostalgia replaces film and TV delays with casts of recent and late classics recording Zoom parties for all to enjoy. Check out Josh Gad’s YouTube series “Reunited Apart” for a host of options.

Even “The Fresh Prince of Bel-Air” earned such social media exposure on Will Smith’s YouTube channel in March. Like the others, it came and went, a quaint appetizer for 12 minutes. Perhaps that was merely a teaser of something more epic to come.

In the game of reunions, only one rules them all: HBO Max’s official “Fresh Prince” special, celebrating the series’ premiere 30 years ago. This is the crème de la crème of reunions, no buffering issues or lost resolution along the way. The cast converges in familiar terrain, the living room they shared for six seasons, portraying a culture clash between affluent relatives the Banks family in Bel Air and a cousin sent away from west Philly when “a couple of guys who were up to no good started making trouble,” Smith rapped at the start of 148 episodes.

Most of the old crew return, with one glaring absence (more on that later, folks). Of course, Smith leads the discussion, as he led the show until its end in 1996. He might control all the pieces, but plenty of reflections paint a picture of a novice uninitiated to the acting craft, some quite hilarious.

Of course, Alfonso Ribeiro breaks down the Carlton, the prominent dance named after his character that keeps popping up across pop culture. Tatyana Ali discusses the anxieties of growing up while portraying the youngest Banks sibling, Ashley. And Karyn Parsons must confront the audition she once submitted for valley girl Hilary Banks.

Even DJ Jazzy Jeff – simply Jazz on the show – enjoys some screen time, though the many times Uncle Phil throws him out of the house seem to go unnoticed.

A host of topics are covered, like casting rituals, on-set dynamics and recurring motifs. But a central topic, one emphasized by each cast member with pride, is what “Fresh Prince” tried to accomplish, not merely as comedy but media of substance.

The juxtaposition between class and race prevailed across multiple seasons, poked fun at in Carlton’s love of Tom Jones and sincerely addressed in clashes with police officers. Perhaps the most poignant analysis comes when Smith briefly notes how relevant the series remains today for the worse, a reminder that some things have not improved for the better.

Each surviving member on screen creates a clear line between “Fresh Prince’s” authenticity and the late James Avery, the masterful actor behind Uncle Philip Banks. The cast fondly remembers his best moments, both comedic and profound, presenting him as a masterful performer who elevated “Fresh Prince” in each scene.

The reunion is charming, each player laughing and sharing memories like a family as they explore the creation of a fictional one enjoyed by millions. Of course, that happens in the absence of not one but two parents.

Will Smith and Janet Hubert, who portrayed Aunt Viv on the “The Fresh Prince of Bel-Air” but left the show under controversy, shared some poignant moments during the reunion. (photo courtesy of HBO Max)

During the 1990s, the NBC series would not go unscathed by controversy. Halfway through, Aunt Viv underwent a recast. Janet Hubert killed the role, but season four kicked off with Reid subbing until the series concluded three years later.

The tension between Hubert and Smith glittered headlines ever since, coming to a head in March 2017 when Ribeiro posted an Instagram photo of “Fresh Prince” colleagues noting only one absence, Avery. Hubert had choice words for Ribeiro before condemning the alleged “reunion.”

“There will never be a true reunion of the Fresh Prince,” she said on Facebook at the time. “I have no interest in seeing any of these people on that kind of level.”

To create a 30-year homage without Hubert would rightly be incomplete, a historical revision that mutates something authentic into spin, easy TV divorced from conflict. But the “Fresh Prince” reunion goes there.

Hubert meets with Smith for a truly gut-wrenching exchange. It calls attention to the damning label “difficult” for a Black woman in Hollywood, especially in the 1990s.

“I lost everything,” Hubert tells Smith, directly citing his role in ending her run on the show. It’s an intense sequence, but regardless of how it concludes (no spoilers), Hubert’s story remains tragic, going nearly 30 years for a degree of closure. That’s a small win at best.

“The Fresh Prince of Bel-Air Reunion” is an emotional rainbow – humorous, heartfelt, thoughtful, uncomfortable even. It praises the many ways “Fresh Prince” advanced representation for a largely resistant industry but calls out at least its most glaring monster in the closet. That’s rather bold for a piece of nostalgia, one of many ways this TV homecoming rules the roost.