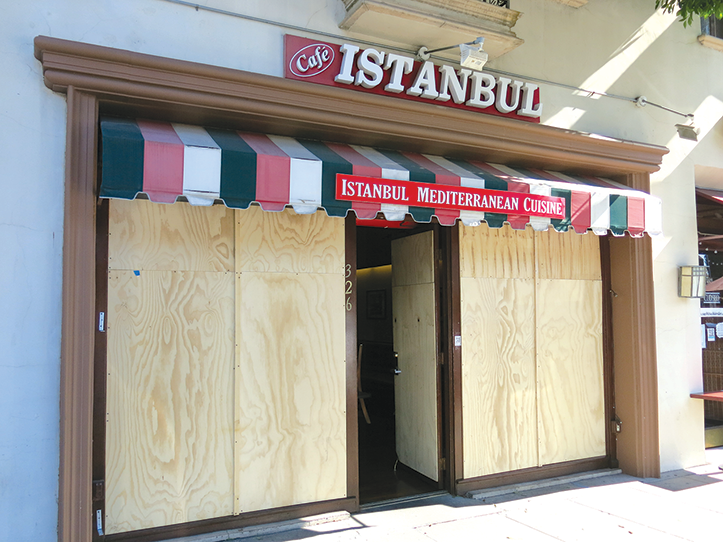 One suspect is in custody, and police are still searching for six or seven other men who allegedly attacked employees of Cafe Istanbul on South Beverly Drive. (photo by Cameron Kiszla)

The Beverly Hills Police Department announced on Nov. 12 that a suspect was arrested for an alleged attack and hate crime at a restaurant on South Beverly Drive.

BHPD investigators worked with the FBI and the Los Angeles County Probation Department to identify one of the primary suspects allegedly responsible for the crime.

The suspect, identified as William Stepanyan, 22, was arrested on Nov. 12 in Glendale. Stepanyan was booked on hate crime, robbery, burglary and vandalism charges. A probation violation hold was issued for Stepanyan at the time of his arrest, police said. He remains in custody without bail, with his next court appearance scheduled for today, Nov. 19, according to the Los Angeles County Sheriff’s Department’s Inmate Information Center website.

Authorities determined six to eight male suspects committed the alleged crime, and police are still searching for the other men. It was not divulged how authorities identified Stepanyan as a suspect.

The alleged crime occurred at approximately 8:30 p.m. on Nov. 4 at the Café Istanbul at 326 S. Beverly Drive. The suspects entered the restaurant, destroyed property and physically attacked employees inside and outside in an alley, police said. The victims stated that the suspects made derogatory comments and pro-Armenia statements during the incident, police added. Security cameras captured video of the attackers turning over chairs and confronting the employees.

The incident is believed to be related to ongoing conflict between Armenia and Azerbaijan, a country supported by Turkey, which Armenians hold accountable for the 1915 Armenian Genocide by the Ottoman Empire.

Anyone with information is urged to call the Beverly Hills Police Department at (310)285-2125. To remain anonymous, call Crime Stoppers at (800)222-8477, text BEVHILLSPD followed by the tip information to 888777, or visit lacrimestoppers.org.