Partnership collaborates with artist on mural 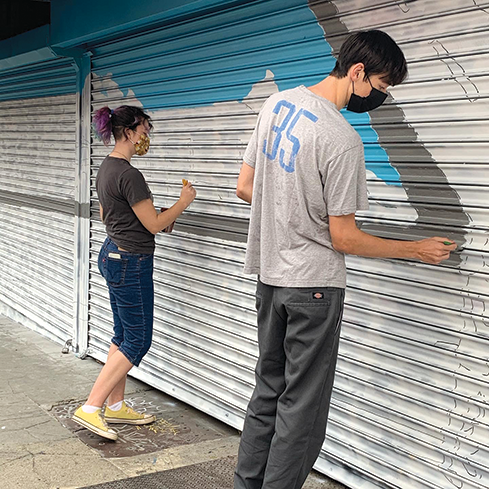 The Hollywood Partnership enlisted the help of volunteers, local nonprofits, residents and artist Noah Humes to create a mural at 6700 Hollywood Blvd. (photo by April Clemmer)

The Hollywood Partnership has teamed up with Arts Bridging the Gap, officers and children of Hollywood Police Activities League and local artist Noah Humes to design and paint a mural that celebrates the magic of Hollywood.

Humes began preliminary work on the mural before he was joined by the Hollywood PAL kids, LAPD officers and community members on Nov. 7.

The mural is being painted on the roll down shutters of the newsstands on Las Palmas Avenue directly south of Hollywood Boulevard. This project was one of the projects submitted and chosen for the Hollywood Partnership’s Set the Scene Place Enhancement Partnership Program this year. The Set the Scene program commits to funding chosen projects that help enhance the Hollywood community. This Set the Scene grant will help ABG create the mural, including artist fees, anti-graffiti coating and a stipend to all of the young artists to encourage them to see arts as a viable career.

“On behalf of the Hollywood Partnership and its Place Enhancement Committee, we’re grateful to Noah, Georgia and Arts Bridging the Gap for the opportunity to fund this project and promote a sense of pride and community engagement in Hollywood,” said Chase Gordon, the Hollywood Partnership Board member and Place Enhancement Committee Chair. “As a local artist, we feel that Noah’s vibrant work embodies the diverse experiences of the children that learn, play and grow up here in Hollywood. There are so many incredibly talented Black artists in our community and it’s important that they’re represented and given a platform to express their creativity and skill.”

ABG and the Hollywood Partnership previously worked together on 32 temporary murals that adorned the intersection of Hollywood and Vine this past summer and now are set to make a more permanent artistic splash just off the boulevard.

“When you ask our kids to paint a picture of Hollywood, they create an art piece where their apartment, the Capitol Records buildings and the stars on the boulevard are all one, right next to a picture of them with their families having a picnic – this is their home. We wanted to capture that side of Hollywood – the side that not everyone sees when they come for the glitz and the glam but a side that is just as special and important to our community,” said Georgia Van Cuylenburg, founder of Arts Bridging the Gap.

The mural is located at 6700 Hollywood Blvd.