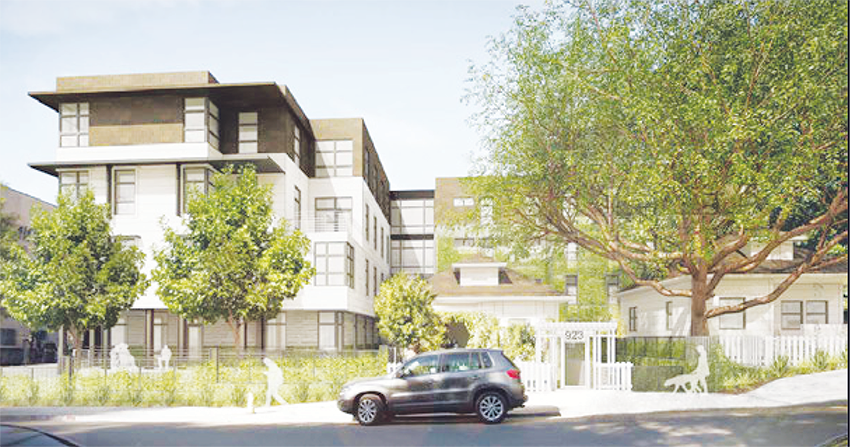 The West Hollywood Planning Commission voted on Nov. 19 to allow a senior congregate care housing facility to proceed at 923-931 Palm Ave., despite community opposition. The new four-story, L-shaped building, which is being developed by Dylan Investment Properties, will incorporate two historic bungalows to provide 49 senior units.

“Staff supports the project given that the proposed rehab work will help preserve the cultural resources without impacting the integrity and provide a needed housing type in the city,” Senior Planner Antonio Castillo told the commission. “Without rehabilitation incentives, the historic property may continue to deteriorate as upkeep and maintenance of the property may not be financially feasible. The new senior congregate care housing facility meets key city goals and provides for the preservation, the rehabilitation and ongoing maintenance of the property and site as well as the goal of promoting housing for a diverse population.”

After hearing multiple public comments, the majority in opposition, the Planning Commission voted 5-1-1 to green light the project. Commissioner Lynn Hoopingarner was the lone “no” vote with Vice Chair John Erickson abstaining. Erickson, who was recently elected to the West Hollywood City Council,  would not have been able to consider the matter twice if an appeal brought it before the council.

“I think it’s the right type of use [and] I think it’s a thoughtful way of preserving these units,” Chair Adam Bass said.

On two separate occasions, the Historic Preservation Commission failed to vote in support of the project moving forward, which Bass characterized as “really disappointing.” He said the most recent HPC 3-3 vote on July 27 gave “no direction” in terms of providing guidance.

The Planning Commission had originally planned to vote on the project on Oct. 15 but postponed the vote to November after residents asked the commission to delay the hearing so they could mourn the sudden death of Duff Bennett, who died days before the meeting. Bennett, who had lived in one of the properties on the site, had spearheaded opposition to the project for the past four years.

Castillo said that after the city published its agenda on Oct. 15, staff received 70 written comments both in support and opposition to the project, as well as general questions.

“I do not oppose the need for congregate care facilities in our community. That’s not what this is about,” stated one resident who spoke during the commission meeting. “I’m concerned about honoring the historic designation of these bungalows.”

West Hollywood Preservation Alliance Board President Victor Omelczenko, who characterized the process as not being sufficiently transparent, emphasized the impact of the project on the future of the neighborhood and the city. The alliance has consistently opposed the project.

Bass, in contrast, said he believed the public was particularly involved in the project given the large amount of community input.

The approved 33,460-square-foot project includes construction of a four-story senior housing facility containing 48 senior units with a one-level subterranean parking garage. In moving forward with the project, the developer will rehabilitate two historic single-family bungalows built in 1902 at 927 and 931 Palm Ave., which were designated as landmarks in 2013. A third bungalow at 923 N. Palm Ave., which is also over a century old, will be torn down as part of the redevelopment, as well as all non-historic accessory structures and rear additions. The bungalow at 927 Palm Ave. will serve as a reception area for the facility, and the bungalow at 931 Palm Ave. will function as a detached residence, for a total of 49 senior units.

Dylan Investments Vice President James Stevens said they plan to partner with Caden Senior Living to operate the facility and it will open in two years.

“This one has been really difficult balancing the benefits and the detriments for me. I definitely see a need for this,” Commissioner Sue Buckner said. “After really thinking this through, I believe it meets pretty much all of the requirements of the code and all of the parameters. In my gut, it makes me uncomfortable, but I’m going to vote for it.”

“There are certain aspects that I don’t like, but overall the good outweighs the bad,” Commissioner John Altschul added.