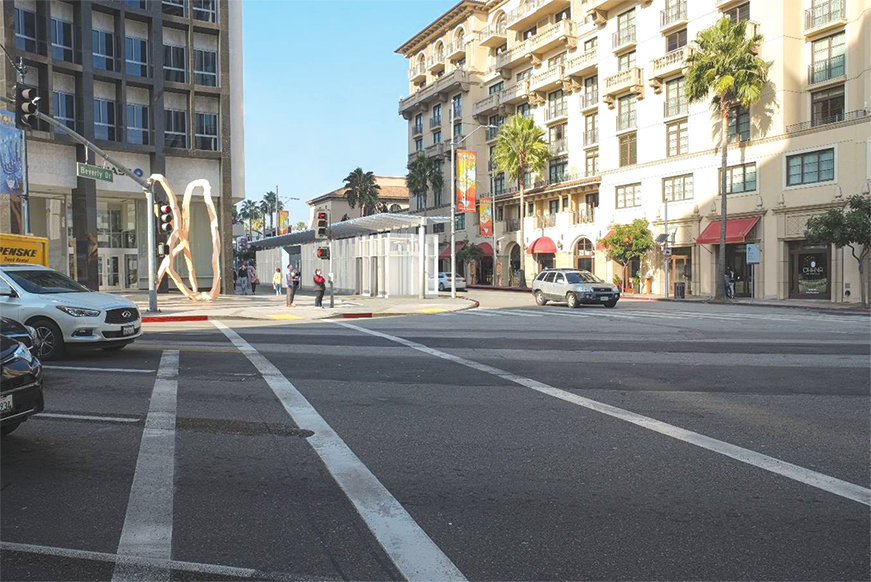 The City Council voted to select Beverly Drive as the location for the north portal of the Wilshire/Rodeo subway station. (photo courtesy of the city of Beverly Hills)

The Beverly Hills City Council unanimously voted to have Beverly Drive become the location of the Wilshire/Rodeo Metro Purple Line subway station’s north portal at its formal meeting on Nov. 10. The north portal will be essential, according to the city’s staff report, for allowing subway users direct access to the Business Triangle on the north side of Wilshire Boulevard.

A draft environmental impact report had proposed three viable options for a second entrance to the station in addition to one on the south side of Wilshire Boulevard at Reeves Drive, which the council first discussed at its formal meeting on Sept. 22. The Beverly Drive location was the westernmost alternative with the two other options both further east on Wilshire Boulevard on or near Canon Drive.

After unanimously agreeing to certify the final EIR on Tuesday, the council voted 4-1, with Councilman John Mirisch opposed, to accept a settlement agreement with Metro to resolve the city’s pending litigation and jointly develop the second entrance.

Mirisch, who supported the Beverly Drive location, said that Metro should be responsible for the entire cost and that the second station should always have been part of the plan.

“I believe it’s a singularly bad deal for the city … [and] is something that MTA should have included from the get-go,” he said.

City staff has been negotiating the settlement agreement with Metro since Feb. 19, 2019, when the council approved an agreement for construction of the Wilshire/Rodeo station as part of Metro’s Purple Line Extension project.

In voting to support the settlement agreement, the city also authorized that nighttime excavation work could take place during the 2020 holiday moratorium. The city had previously authorized a holiday moratorium on work from Thanksgiving through Dec. 31. Station excavation, hauling, material delivery and utility maintenance are now scheduled to occur from 1 a.m. to 10:45 a.m. through June 30, 2021. However, no work can occur on Thanksgiving Day, the Friday after Thanksgiving, Christmas Eve, Christmas Day, New Year’s Eve and New Year’s Day, as well as during any planned city-sponsored events.

According to the city’s staff report, the cost for the environmental review, design and construction of the north portal at Beverly Drive is estimated at $78.5 million with each party – Metro and the city – paying half of the cost. Metro also committed to installing bathrooms to serve station customers, which could be included as part of a future development at the station, the report further stated.

The Beverly Drive station, as proposed on the west side of the street, will include stairs, one “up” escalator and two elevators. As many as 14 parking stalls on Beverly Drive would be removed to widen the sidewalk to accommodate the portal and optional passenger loading, based on projected boardings. The Beverly Drive station is the closest to the center of the Business Triangle, and just one block east of Rodeo Drive.

“I completely do agree with the staff’s recommendation for Beverly Drive. In terms of its proximity to the business district, I think that is the best location,” Councilwoman Lili Bosse said.

In helping to make the determination, consulting firm Keyser Marston Associates Inc. prepared an economic impact analysis which determined that the net economic benefits were maximized by the Beverly Drive location; albeit only marginally among the three locations. The cost for the Canon Drive location was estimated to be approximately $68 million and the cost for the Canon Drive staging yard location, which is on Wilshire Boulevard between Canon and Crescent drives, was estimated to be $115 million with parcel acquisition.

According to the staff report, the city received a total of 153 comments on the draft EIR with 26 comments in support of the Beverly Drive location, three for the Canon Drive alternative and one for the Canon Drive staging yard. The Beverly Hills Chamber of Commerce also voiced support for the Beverly Drive location. Of the comments received, 38 were solely related to the environmental analysis, with the remainder stating a location preference and/or commenting on topics unrelated to the environmental analysis.

“The overwhelming number of community and stakeholder comments received on the Draft EIR stated a preference for a portal location on Beverly Drive,” stated the report. “While the EIR determined that the three alternatives do not greatly differ based on environmental criteria, the Beverly Drive location best meets the project objectives due to its proximity to the center of the Business Triangle and the fewest required street level pedestrian crossings to access it.”

At the Nov. 10 meeting, Beverly Hills Historical Society Founder Phil Savenick, who lobbied for the Canon Drive half portal, was one of four people to voice their opinions during the public comment period and he used his time to voice his dissatisfaction with the planned Beverly Drive station.

“It will only be a series of holes in the sidewalk. There is no station,” he said, noting that none of the options had room for security or sanitary services. “Loading and unloading on Wilshire will be a traffic disaster, no matter what you pick.”

After hearing from staff, Councilman Julian Gold echoed Savenick’s assessment that the station was essentially a hole.

“I have to say…looking back, I’m kind of disappointed,” he said, noting that none of the options really provided amenities for riders, residents and businesses. “It would be nice to have a portal that would include a place to get a cup of coffee, or a place to get a newspaper … some amenity that’s more than just having a hole in the ground with an escalator.”

Mayor Lester Friedman said that the site had the potential to evolve in the future and could potentially accommodate a police substation.

“There is certainly a possibility that in the future there could be a joint development with the owner of that property and the city that could possibly give us another portal there that would have some of those amenities,” he said.

Vice Mayor Bob Wunderlich underscored the importance of making sure that the subway helped alleviate traffic – as opposed to worsening the problem. He advocated for additional parking for bicycles.

“I also do think that there is a lot of work that we are going to have to do before the subway is actually here. I’m not satisfied with the extent of how we have studied the traffic impacts of the north portal being there. I think we have to study that in greater depth and we have to figure out what we’re going to do to mitigate the traffic impacts,” he said.

Construction of the Beverly Drive location could begin as early as 2022. According to the report, construction would require a full street closure of Beverly Drive between Beverly Canon Gardens and Wilshire Boulevard for approximately three years. However, this timeline would allow the north portal to potentially open in conjunction with the opening of the Wilshire/Rodeo station in 2025.