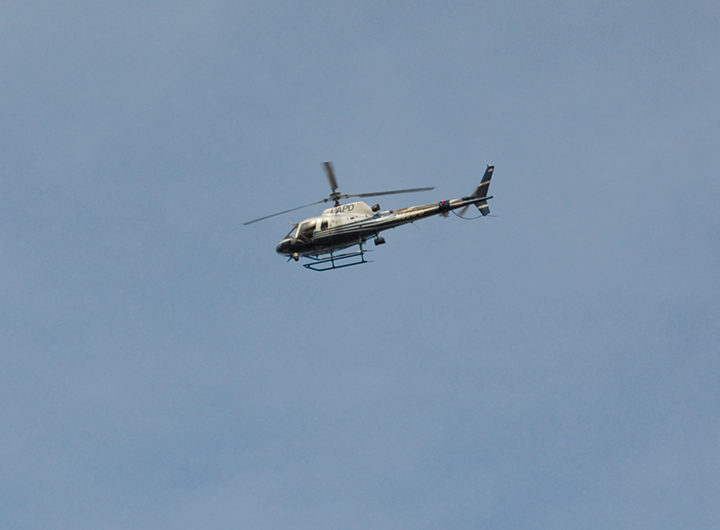 Authorities used the incident to highlight the potential danger of drones in densely-populated urban areas. People often receive drones as gifts or are hobbyists who may be unaware of strict rules for flying. Situations like the aerial crash in Hollywood illustrate the potentially dire consequences that can occur when drone operators do not follow regulations, police said.

The defendant, Andrew Rene Hernandez, 22, was charged with the unsafe operation of an unmanned aircraft. Federal prosecutors allege he recklessly operated a drone that crashed into a police helicopter on Sept. 18 as it flew over ground units responding to reports of a commercial burglary at a pharmacy. The location of the incident was not divulged, other than it occurred in Hollywood.

The helicopter’s nose, antenna and bottom cowlings were damaged and the pilot was forced to make an emergency landing. No injuries were reported, but authorities said there was a potential for a catastrophe. “If the drone had struck the helicopter’s main rotor instead of the fuselage, it could have brought the helicopter down,” the criminal complaint read.

The FBI, Federal Aviation Administration and LAPD investigated and served search warrants in late October at Hernandez’s Hollywood residence. Hernandez allegedly admitted to flying the drone after he heard police sirens and an approaching helicopter, prosecutors said. In the criminal complaint, Hernandez is alleged to have said he flew his drone “to see what was going on” and as the drone was ascending, he saw it “smacked” by the hovering police helicopter.

Federal law governs the operation of unmanned aircraft, and operators must follow numerous rules. All drones must be registered with the FAA. Recreational operators are required to stay at or below 400 feet off the ground and nighttime flying is restricted. One of the primary rules listed on the FAA’s website is that operators must never interfere with emergency response activities.

Capt. Steven Lurie, commanding officer of the LAPD’s Hollywood Division, said thankfully, incidents involving drones and helicopters are infrequent. He said drone operators occasionally fly over crime scenes. In 2015, an LAPD helicopter had to make evasive maneuvers to avoid a drone over a crime scene near Sunset Boulevard and Western Avenue.

“These are quite rare, but of course significant when they occur,” Lurie said. “The primary danger is to the police helicopter. Any strike to the airship could be tragic.”