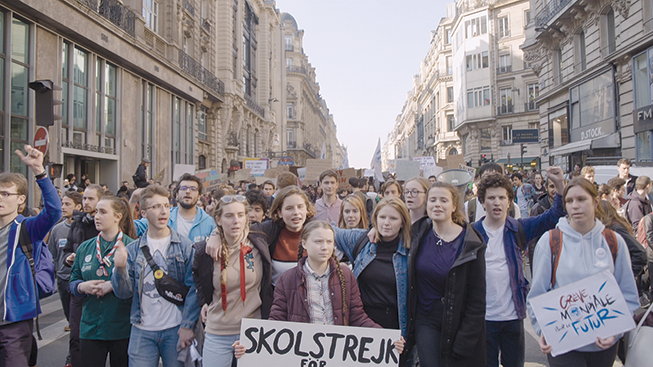 “I Am Greta” offers a behind-the scenes look at the life of teen environmental activist Greta Thunberg. (photo courtesy of Hulu)

Greta Thunberg is a household name in environmental activism. The now 17-year-old Swedish teen made headlines in 2018, and “I Am Greta” chronicles several moments not long after, building to something across the pond. The Hulu documentary highlights many familiar public events, but succeeds at presenting a personal story about someone with conviction.

“Greta” presents a veneer of chronology as 15-year-old Thunberg travels to various locations, meeting familiar faces along the way, from French President Emmanuel Macron to Arnold Schwarzenegger, only identified in the documentary as “former governor of California.”

But those speeches – complete with salty rebukes customized for world leaders – accent the film’s intimate moments between her and her father, Svante, along with the little details that go unseen by news media. She misses her dogs while she traverses the world. Her father worries about her health. And she fills downtime with climate research and ample freeform dance routines.

None of this amounts to dramatic filmmaking. Instead, it’s all quite mundane. Perhaps that’s the goal for director Nathan Grossman in his feature debut. Rather than pepper Thunberg’s story with facts and figures, we look behind the scenes into a teenager’s life over the course of several months.

Sure, Thunberg’s sailing trip across the Atlantic in 2019 creates the most intense sequence in the film – the closest “Greta” comes to a dramatic third act – but the trip feels anecdotal. To do more, to present this harrowing journey as the culmination of her life’s work, would be far too Freudian, a diagnosis beyond what a documentary can deliver.

“I Am Greta” thrives in its modest moments, lingering on a 15-year-old (16 as the story progresses) living a familiar life. She debates what to wear with dad, while her voiceovers from interviews we never see vent her hopes and, more so, frustrations with activism.

Again, it’s a familiar story. How much does activism like this work? Based on her own words, Thunberg feels the weight of her duty to the world, though she wishes for a more modest life. The little of moments featuring Thunberg acting her age don’t merely humanize her; they embody what damaging the climate has done for future generations who must grow up faster to chastise years and years of neglect.

Mind you, “Greta” doesn’t ignore the very vocal opposition. A sea of talking heads bemoan Thunberg’s profile. She’s a child who doesn’t know better. “Kids should go to school – and less activism in schools,” a politician declares, while the obnoxious Piers Morgan and broadcast squawks use their platforms for hot air.

“If it were about science, it would be led by scientists, rather than by politicians and a mentally ill Swedish child who’s being exploited by her parents and by the international left,” one such Fox News talking head says without shame or ethical concern.

Such arguments occur in bad faith since the majority of the scientific community agrees on this point, so much so that the BBC no longer amplifies deniers, giving them equivalently more air time than they deserve. But Thunberg never dignifies naysayers, and “Greta” mostly uses such moments to texture the cultural moment, never singing on them.

The notion that students should avoid activism – avoid critical thinking – is perplexing. But once more, “Greta” cares not to linger on such things, though it does elate in social media trolling in one scene of Thunberg laughing at online responses to her activism.

Finding joy or hope in “Greta” – and how it presents a teenager as a prominent and important figure in unifying young voices around the world – entirely depends on how you perceive the role of young people. Are they active agents? Is a teenager a free thinker?

Thunberg faces these challenges, especially when an Italian reporter says “you suffer of Asperger’s syndrome.” She corrects him: “I wouldn’t say ‘suffer from,’ but I have it.” Her haters will shamelessly find anything wrong with her, from her age to a diagnosis.

But that’s the plight of the young, always told their voices don’t matter unless they comply. It’s an impossible game, and “I Am Greta” cares little for it. When she speaks about the need for change, scolding complacent adults, she proves that truth and conviction are louder than a sea of defensive drones.