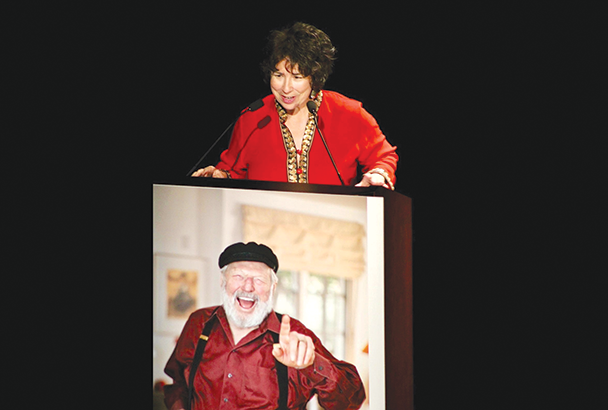 Author Aimee Ginsburg Bikel will present a story by her late husband in commemoration of Kristallnacht. (photo courtesy of Holocaust Museum LA)

In commemoration of the 82nd anniversary of Kristallnacht, Holocaust Museum Los Angeles presents “Theodore Bikel’s City of Light,” a virtual presentation about the award-winning book on Tuesday, Nov. 10, at 11 a.m.

Kristallnacht, also known as the “Night of Broken Glass,” was a campaign of destruction across Nazi Germany and Austria carried out against Jews on Nov. 9 and 10, 1938. Nazi paramilitary forces destroyed Jewish homes, hospitals and businesses, ransacked synagogues and arrested and incarcerated 30,000 Jewish men.

“City of Light,” written by Aimee Ginsburg Bikel and illustrated by Noah Phillips, is based on a story by Bikel’s late husband, acclaimed actor, singer and activist Theodore Bikel. It tells the story of a young boy’s happy childhood in Vienna, which is later overtaken by brutal and violent anti-Semitism as Nazi influence grows. He experiences Nazi Germany’s annexation of Austria and Kristallnacht. Forced to flee, the boy grows up and returns to Vienna years later to find its Jewish community and temple have been restored, revealing a hope that has always been in his heart.

Aimee Bikel is a writer, journalist, public speaker and community organizer. As the director of the Theodore Bikel Legacy Project, she is active in causes promoting social justice, peace and Jewish folk culture.

A donation of $10 is suggested. For information, visit holocaustmuseumla.org.