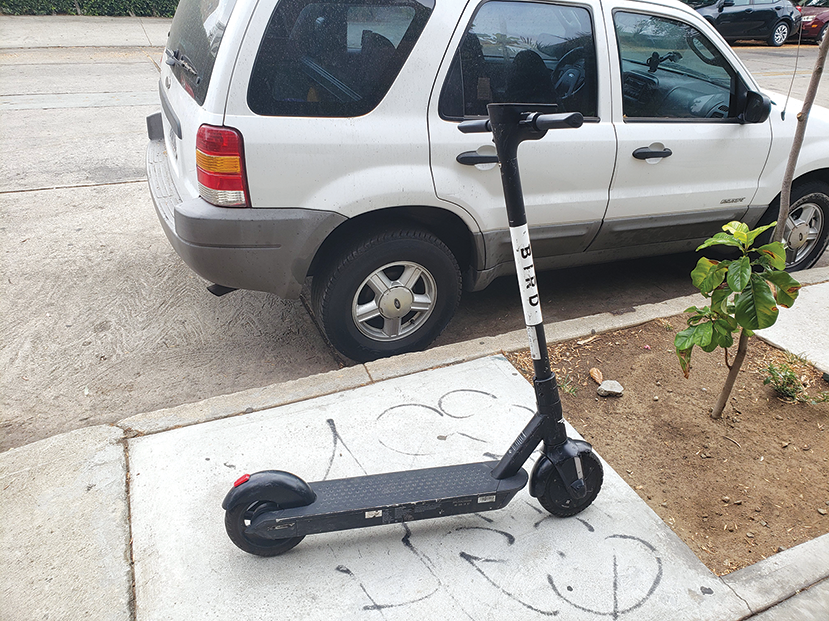 E-scooters have been prohibited in Beverly Hills since 2018. (photo by Cameron Kiszla)

The Beverly Hills City Council chose to extend its ban on the use of shared mobility devices – such as e-scooters from companies like Bird and Lime – in the city on Nov. 17, though the issue will be considered again in the coming years.

Councilman John Mirisch voted against extending the provision. While he wanted an extension – as opposed to the permanent ban that had been recommended by staff – he thought the council’s time limit was too long.

“I would support extending it for a year, but that’s about as far as I could go,” Mirisch said.

Both Mirisch and Vice Mayor Robert Wunderlich thought the permanent ban was too harsh, as the devices, which are known to block sidewalks when not in use, are popular in Los Angeles and other nearby cities, and they provide an alternative to the use of cars, which could provide assistance in fighting climate change. Also, with the Metro Purple Line Extension subway line coming to the city in 2023, people could use the devices to get to and from the stations, as pointed out by multiple callers during the public comment portion of the meeting.

“I wouldn’t support and can’t support a forever, across-the-board ban on this,” Mirisch said.

“Setting a ban without an end is sending the wrong message,” Wunderlich added.

Other council members, however, were concerned with issues beyond where the devices would be left when not in use. When the council adopted its ban on the devices in 2018, concerns were raised about riders on sidewalks endangering pedestrians, and riders in streets endangering themselves and motorists. Though representatives of companies such as Bird and Spin appealed to the council during public comment on Nov. 17, council members said the companies had otherwise done little to allay their fears and have not returned with workable plans.

“What have they done to address the issues that we’ve had for two years?” Mayor Lester Friedman said.

Councilwoman Lili Bosse and Councilman Julian Gold said that if these concerns were addressed before the ban is reauthorized or made permanent, the council could consider allowing the devices in the city. As of now, that is not the case, they said.

“If it were to be that somewhere down the road, somebody showed up with a cogent plant to minimize the risks and all the rest, I would have no problems talking to them,” Gold said.

“The issues are not resolved. I think whoever is watching has heard loud and clear what some council members’ concerns are on these … Ultimately, we’d all like to have it, but we need these issues resolved,” Bosse added.