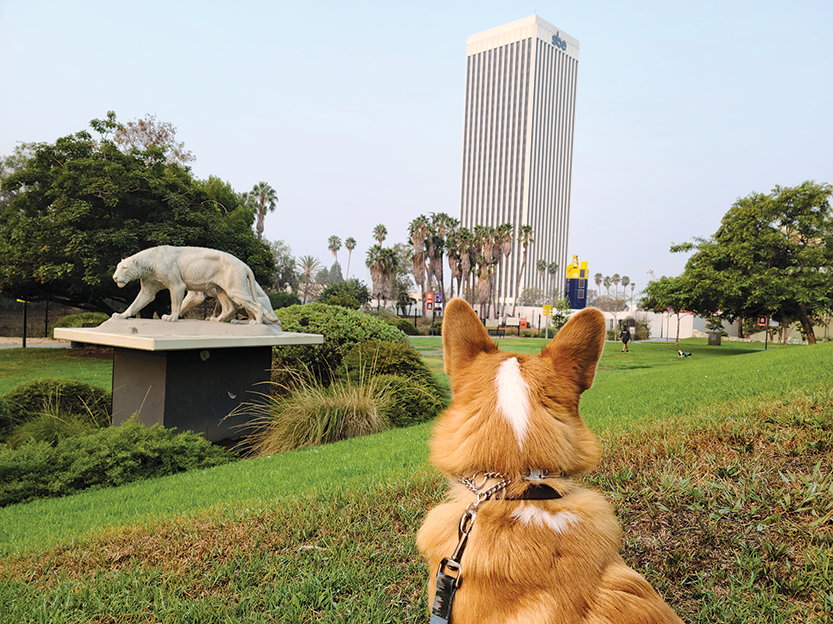 Pet lovers hope a space for their canine companions can be included in the park around the La Brea Tar Pits and Museum. (photo courtesy of Thao Tran)

With a proliferation of pet owners in the Miracle Mile, some local residents and hundreds of online supporters have joined a campaign to ask that a space for dogs be included in the reimagining of the park surrounding the La Brea Tar Pits and Museum.

The petition was launched on change.org in early October by Miracle Mile resident Thao Tran and Matthew Carpenter, the proud owners of a 1-year-old Welsh corgi named Kobe. The museum and its surrounding grounds, known as Hancock Park, are currently being reimagined in a multi-year project to transform the site. Tran hopes that generating support in the community will convince administrators from the Los Angeles County Museums of Natural History to consider the idea.

“Dogs don’t really care where they are in a park as long as they have some dedicated area. If it’s a less desirable part of the park, I’m sure there is a way to design it where we won’t get any tar on any paws, but in sort of a forgotten area of the park where you don’t expect much traffic,” Tran said.

A member of the Miracle Mile Residential Association and the Mid City West Community Council, Tran said she has received support from community groups and many other dog owners during near-daily visits to the park. More than 1,300 people have signed the online petition.

Tran said she heard anecdotally that the museum did not receive enough support for a dog park feature when public input was first sought during the past couple of years before initial museum redesigns were announced. She is hoping for an opportunity to eventually present the plan and petition to museum administrators.

The reimagining and design process for the La Brea Tar Pits and Museum is currently underway, with the New York-based firm Weiss/Manfredi developing plans. The community will have an opportunity to see the plans next spring, said NHMLAC spokeswoman Sally Marquez, who added that there was “no comment on the petition for a dog park.”

While the future of the idea remains unclear, supporters are hoping for an opportunity to provide more input on the plans.

“It’s definitely an issue for us and we would definitely like to push ahead with that,” MMRA President Greg Goldin said.

“It’s not an issue we have formally weighed in on as a board, but I think personally, it’s an exciting idea,” added Scott Epstein, chair of the Mid City West Community Council. “Hancock Park is a significant public space, and for me, the idea of considering it for all kinds of public use is exciting.”

Tran said she remains undaunted. Support for the idea is evident in the number of people who have signed the online petition, she added.

“I think it’s fantastic,” Tran said. “It demonstrates how much our immediate community wants it, which is what I’d like to show them.”

i want a dog park

Yes! A brilliant idea! We need a dog park at the La Brea tar pits!!!!