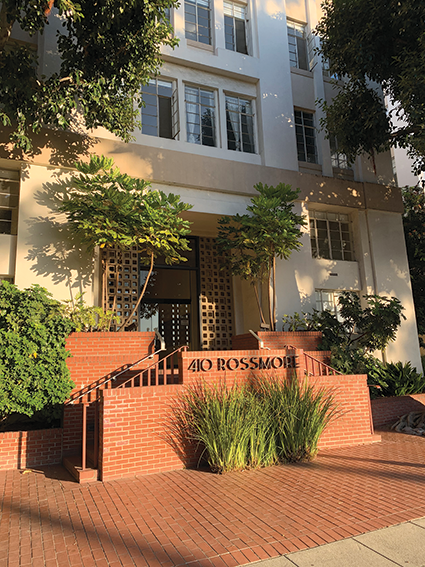 A major renovation to the 90-year-old building at 410 N. Rossmore Ave. has been put forth by Atlanta-based developer Domos. Plans have yet to be presented to the Los Angeles Department of Building and Safety; however; a publicist working on behalf of Domos released the first renderings of the new co-living concept – where residents have suites with private bedrooms and baths but share kitchen and living room facilities – earlier this month.

According to the L.A. County Office of the Assessor, Domos purchased the 78-unit, 65,000-square-foot building on Jan. 22 for $29 million. Once renovated, the five-story building will gain an additional four stories to house 225 residents in 87 units, including co-living suites which will primarily have five bedrooms.

Despite not being designated a historic property, Domos’ Director of Design and Construction Richard Loring said that Domos is committed to following the Secretary of the Interior’s standards for rehabilitation in renovating and adding on to the building. L.A.-based Lorcan O’Herlihy Architects have been hired to restore, reconfigure and seismically retrofit the building.

Since the building’s purchase, tenants have continued to voice concern about being displaced as renovations proceed.

One tenant, who asked not to be named for fear of retribution, said that the Domos development team has actively worked to get residents to give up their rent-stablized leases and leave the building.

“Many of the long-term tenants want to stay in the building. We feel it is absurd, dangerous and unethical to require us to move out for construction during a global pandemic in order to build high-density co-living housing. It does not serve public health or the community,” the tenant said, claiming that Domos appeared to be working to capitalize on this period of financial vulnerability.

Loring, who has been living in the Rossmore building for the past several months, said that once renovations are complete in 2023, he projects that 16 units would be occupied by the original tenants, who would pay lower rates since they would remain protected under the RSO. He said that 44 units are presently occupied, several of whose tenants have already accepted a buy∆1

out. Loring said that tenants who accept the developer’s “cash for keys” buyout, on average $50,000, also have the option to reside in the building rent-free until renovations begin. Despite the project having yet to attain city approvals – a spokesperson said plans will be filed in January or February – Domos plans to begin construction in May 2021 and is projecting that renovations will take 22 months to complete.

Current tenants who don’t take the buyout can utilize the city’s tenant habitable program, which ensures that the tenants are temporarily relocated to alternative housing locations.

After the renovations are complete, Loring said that tenants would return to their units “and basically enjoy the same rents that they’re paying now,” in addition to having access to more amenities.

Shortly after Domos purchased the property in January as a joint venture with Beverly Hills-based ESI Ventures, dozens of residents attended a Greater Wilshire Neighborhood Council meeting on Feb. 25 at Marlborough School, where they voiced concern about being displaced. At the meeting, Debbie Chesebro, then co-head of the building’s tenants association, said she had collected 42 signatures from residents stating that they opposed returning to a building designed for co-living. At the time, there were 54 people living in the building.

On March 27, Los Angeles City Councilman David Ryu, 4th District, wrote a letter to Domos one day after his staff met with the developer to discuss concerns related to how residents were being treated by the building’s new owners in light of the coronavirus pandemic.

“I oppose and will take action against any decision you make which places tenants at 410 Rossmore at higher risk of spread. I will support any decisions you make that increase their safety,” Ryu wrote.

Ryu further stated his opposition to Domos having set up an office inside the building which a member of the team was using as a “spare residence.”

“I note that the purpose of ‘Stay at Home’ should guide you to stay in your primary residence unless you are under quarantine or social isolation. I do not support your establishment of a secondary residence inside an RSO unit. You and the staff of Domos are also non-essential personnel not covered under the exemptions, and you are putting the health of your tenants at risk. I urge you to obey the Safer at Home order immediately,” Ryu wrote. “I also note, all spare units in your building are vital components of the city’s naturally occurring affordable housing supply and would be better used to rent to tenants who need housing instead. … I continue to encourage you to safely lease these units.”

While plans call for the building shell to remain, Loring said that the entire interior would be renovated to create a mixture of 60% traditional apartment units and 40% co-living units.

“There are a fair number of co-living projects in L.A. right now. What you’re generally seeing is a demographic that starts in the late 20s and goes up through late 30s,” Loring said. “But anybody that likes that living style could rent in a co-living unit.”

Loring said Domos will not market the project to traditional families.

Included in the plans are a gym and amenity space on the ground floor, co-working extension spaces throughout the building and a pool, spa, lounge deck and event space on the roof. In addition, some of the floors incorporate open, outdoor living spaces.

“We’re adding a significant number of attainable units to the market,” Loring said, emphasizing that most of the rentals being built would be priced for the average median income.