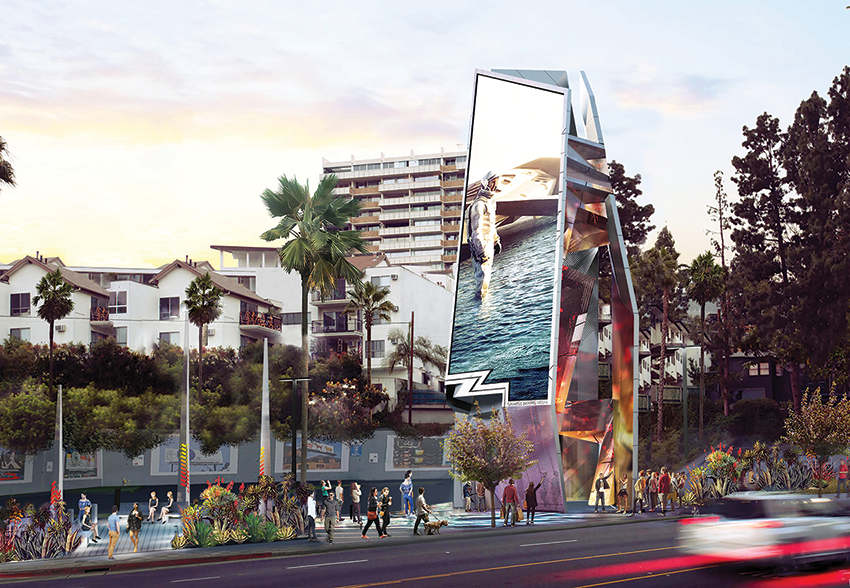 The Sunset Spectacular billboard could be operational by the end of this year. (rendering courtesy of Tom Wiscombe Architecture)

As part of its consent calendar on Nov. 2, the West Hollywood City Council unanimously approved multiple changes to the city’s agreement with Orange Barrel Media for the Sunset Spectacular digital billboard at 8775 Sunset Blvd.

Work has begun on the billboard, which was approved in 2018, but due to the economic downturn caused by the COVID-19 pandemic, the outdoor advertising industry as a whole – and the Sunset Strip in particular – is not as profitable as it once was, according to the city staff report.

John Leonard, the city’s community and legislative affairs manager, said in an email that staff has heard from consultants and people in the advertising industry that “outdoor advertising is down in many urban areas, likely because of reduced traffic, but has recovered more in some rural areas as people took road trips during the summer, and traffic patterns returned closer to pre-pandemic levels.”

As a result, Orange Barrel Media indicated to city staff that it may struggle to meet the minimum annual guaranteed payment owed to the city for the first two years of the billboard’s operation: more than $1 million each year.

In exchange for reducing the minimum annual payment to $480,000 per year for two years, Orange Barrel Media has agreed to extend its contract with the city by up to two years. In the third year of the contract, when the payment amount returns to its normal figure of over $1 million, that repayment will be 6% larger and will remain that way throughout the rest of the 12-year contract, resulting in “an additional $715,000 in guaranteed revenue for the city,” the staff report said.

“Staff believes that these changes are reasonable, and in the best interest of the city, because without these changes it is unlikely that Orange Barrel Media would complete construction of the sign at this time and turn on the sign to begin selling advertising, because the minimum annual guarantee payment would present too much of a risk to them,” the staff report said.

“[This change] will allow Orange Barrel to complete construction and operate the sign now, instead of having to wait until outdoor advertising revenues improve post coronavirus,” Leonard added. 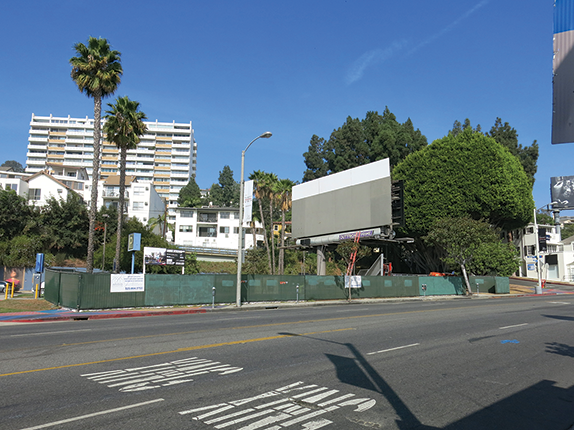 Construction is ongoing for the Sunset Spectacular, though the economic impacts of the coronavirus created a hurdle for the billboard’s owner, Orange Barrel Media. (photo by Cameron Kiszla)

In an email, West Hollywood Mayor Lindsey Horvath said without this deal, it might have been “several years” before the Sunset Spectacular was completed.

City staff also confirmed that though the guaranteed payment will be lower for the first two years of the billboard’s operation, the city retains the right to receive 40% of the “modified gross advertising revenue” from the billboard if that figure is higher than the minimum guaranteed payment, so if the market rebounds more quickly than expected, the city will benefit.

“On paper, the change shows a reduction in revenue, but it is unlikely the city would have received that revenue at all due to the financial impacts of the coronavirus pandemic.  The change in the agreement allows the city to still receive guaranteed income, share in the upside if advertising revenues improve and receive additional revenue in the out-years of the agreement,” Horvath said.

In addition, city staff negotiated rights to redevelop the site for the city before the contract ends – a benefit that was not previously included – and the city has the right to buy out the existing contract.