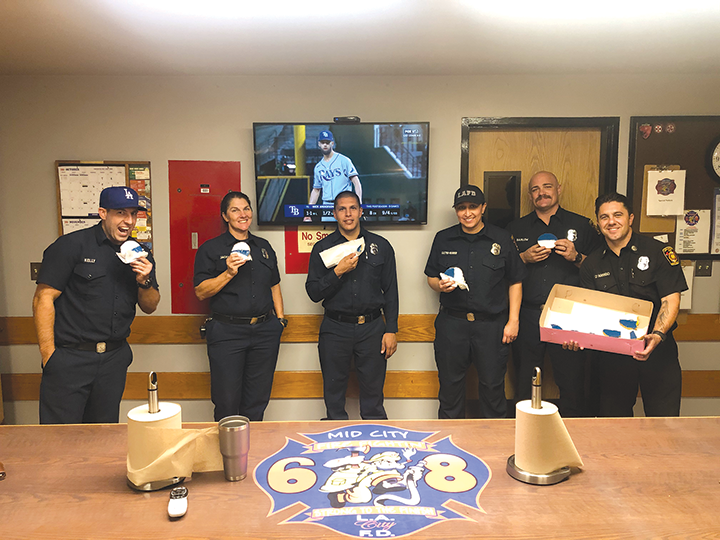 The First-In Fire Foundation partnered with Canter’s Deli on Fairfax Avenue during the World Series and scored big by delivering Dodger Blue and White cookies to local firefighters and paramedics.

To commemorate the team’s World Series win, the first since 1988, Canter’s donated the cookies to the First-In Fire Foundation’s “Firehouse Dinners” program, which distributes food to local fire stations. Canter’s hit a home run with the personnel at fire stations 27 and 41 covering the Miracle Mile, Melrose and Fairfax districts, and Hollywood. Cookies were also delivered to the leadership at LAFD Headquarters in Downtown Los Angeles, as well as the South Bureau and Central Bureau operations headquarters, and Battalion 18 headquarters.

The Los Angeles Fire Department also allowed firefighters to wear Dodger blue hats on duty during the Dodger’s appearance in the World Series.

“The Dodger Blue and White cookies arrived at LAFD headquarters and helped lift the spirits of the fire chief’s staff,” LAFD Chief-of-Staff Graham Everett said. “The cookies from Canter’s Deli are as much [a part of] L.A. as the Dodgers and they were a perfect way to pull us together to root on the boys in blue.”

Cohen said Canter’s Deli is an important partner in the “Firehouse Dinners” program.

Enjoy Thanksgiving with an English twist at Market Tavern