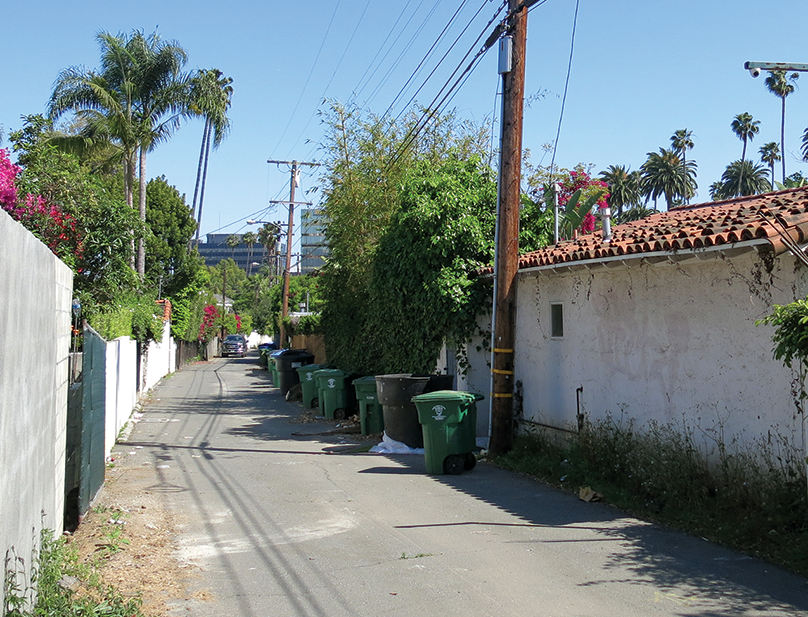 Trash rates in Beverly Hills depend on factors like whether a property is residential or commercial, and if trash is picked up on the curb or in an alley. (photo by Cameron Kiszla)

A decision on a potential increase to solid waste rates in Beverly Hills will likely wait until next year as the City Council seeks more information.

The increase was sparked by an increase in the cost of the city’s contract with Athens Services, which collects solid waste in the city. That eight-year contract will increase by 61% on April 1, 2022, and the council will have to decide how best to strike a balance between passing the increases on to residents and businesses and offsetting some of that cost increase with money from the city’s reserves.

Vice Mayor Robert Wunderlich and Councilman Julian Gold, who comprised a liaison committee to consider the increased rates, joined city staff in proposing that instead of passing on a large increase to customers at one time, the city could gradually increase rates, beginning on July 1, 2021, and continuing each year until July 1, 2025.

“Instead of raising our rates then, all at once, we’re trying to slowly implement a rate increase so that it’s more manageable for our customers,” said Shana Epstein, the city’s director of public works.

According to the city staff report, solid waste rates in Beverly Hills had not increased since 2011 and, if enacted, residents and businesses may see their rates go up drastically, though that figure will depend on the type of customer and whether their trash is picked up curbside or in an alley. For instance, a residential customer on a single-family, 11,000-square-foot lot currently pays $114.40 per month for bi-monthly trash pickup, and that figure could go up to $182.60 per month by July 1, 2025.

“It is a large increase, but it is a competitive increase [as compared to other nearby cities] … driven by market forces, in particular, a decline in the recycling market. It had been a long time since we had a rate increase, so all of those things explain why we have a large increase,” Wunderlich said.

However, with the ongoing pandemic and its associated economic downturn, council members were reticent to charge residents and businesses more.

“It’s so hard for me to fathom asking anybody to pay a higher rate right now, while we’re in the middle of COVID,” Councilwoman Lili Bosse said.

“Here we are in the middle of a pandemic and we’re looking to treat residents, yet again, like ATM machines. I find it shameful and it’s unconscionable, and it’s time to stop treating our residents like ATMs,” Councilman John Mirisch added.

The council members asked city staff to return in January with studies of how much of the city’s reserves will be used if the increases are delayed to Jan. 1, 2022, if no increase is enacted, if the proposed increase is enacted and, after a request by Mirisch, if the proposed increased rates are reduced by 5%. Projections from city staff show that the graduated increases could require the city use between $8.4 million and $10.3 million in reserves, though that figure could increase if less of the new contract is passed onto consumers.

“It seems to me that in a month, we could know how much bigger [the impact on the city’s reserves] will be, see if that’s palatable and see if that’s worth it to us to see if we can have a more equitable multifamily system and … delay the rate increase a little bit more. Not saying we’ll go with that option … but we can get an additional data point that we can use to make that decision,” Wunderlich said.

The council members, however, also wanted to make clear that they were not trying to charge residents and business owners more. Rather, they were simply reacting to forces outside of their control.

“Underneath it all, people have to understand that the city is already paying these rates … and the question is, at what point do the ratepayers – rather than the city – pay these rates? We’ve deferred this for a while in an effort to be sensitive to COVID and an effort to be sensitive to the rate payer … Nobody wants to pay more. We get that. The city doesn’t want to pay more. We get that. None of the ratepayers want to pay more, and certainly we understand that. We, by the way, are all ratepayers. But at the end of the day, we didn’t really have a lot of choice, and this was the only way we were going to be able to make this fiscally responsible,” Gold said.

A reason to be thankful during hard times