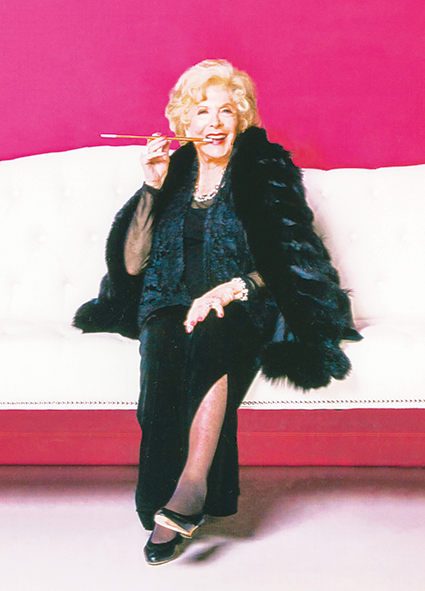 Over the course of nearly a century, Janet Salter watched the world change dramatically. But throughout her life, one thing never changed: her steadfast commitment to fostering deep relationships and sharing her generosity with those around her. She passed away at age 97 on Oct. 31.

Born in Los Angeles on Dec. 10, 1922, when Warren G. Harding was president, Salter became politically active before she could vote. She socialized with presidents Gerald Ford, Ronald Reagan and Bill Clinton and was thrilled to have met the man she characterized as “better-be-president” Joe Biden originally in the 1970s. Together with her husband of 68 years, former Beverly Hills Mayor Max Salter, whom she married in 1942, the Salters threw Biden his first L.A. fundraiser and many thereafter. Her first vote was for Franklin Delano Roosevelt in 1940 and, in the final election of her life, she signed her name on the outside of her ballot and carefully filled in the circle for Biden, according to her children.

After graduating from Otis College for drawing, Salter, a talented artist, went to work for Henry Rogers publicity agency. With her husband, she raised three children, Pepper Salter Edmiston, Mike Salter and Laura Shields, and had 12 grandchildren and 14 great-grandchildren.

Her friends and family emphasized the deep ties she formed in the community, becoming truly beloved after moving to Beverly Hills 60 years ago. A cartoonist for the Beverly Hills Courier for 40 years until it was sold last year, Salter was also particularly involved with the arts, serving as president of the Beverly Hills Theatre Guild for a dozen years, and only stepping down from the guild board when she turned 95. In addition, she was consistently philanthropic on behalf of a multitude of causes.

“Janet was the most generous, giving person I’ve ever known,” described longtime friend Marilyn Gallup, the immediate past president of Hadassah, the Women’s Zionist Organization of America. The two women served for years together on the board of the Beverly Hills Theatre Guild.

“Janet’s house was open to every organization, to every charitable and political event you can imagine,” Gallup described. “Literally, Janet never said ‘no.’ Whatever you asked her for, she never could say no. Whether it was her time, her money, her home, whatever. She’s just the most incredibly generous person. She will be missed beyond anything you can imagine.”

Two-time Beverly Hills Mayor Lili Bosse, one of the many beneficiaries of Salter’s kindness, recalled the philanthropic luminary with great appreciation.

“We lost one of the best this weekend,” Bosse said. “Her kindness, sense of humor and open heart was like no other. She opened her home to me and hundreds more for both my campaign kick-off events and threw many parties for singles so they could find love. She did so much for our schools and changed so many lives. A true guardian angel of all time. I will love her forever.”

Her children recalled fondly how captivating Salter was.

“Our mom was enchanting all of her life. She had boyfriends coming and going and girlfriends staying. To most people, mom was the funniest, liveliest, most exciting and glamorous woman they’d ever met. One of her young beaus carved her initials in his arm. She saw him when they were in their 90s and he rolled up his sleeve, thrilled to reveal his 80-year-old scar. Mom kissed him on the cheek and he turned red,” her children wrote in a joint message.

Salter was known for throwing imaginative parties, including assorted Bark Mitzvahs for her many mutts. Her children recalled how when the Salters noticed that their friends’ children weren’t getting married, they started the Salter’s Singles Group, where young Jewish men and women were invited to Friday nights at their home with free food and booze, and lots of possibilities. At each event, her husband stood on a chair and yelled, “Jews! Get married and procreate… in any order!” Salter would jovially pull him down from the chair and ask him to behave. Ultimately, there were dozens of marriages and lots of little “Max and Janet” babies born during those years.

When Max Salter decided to run for City Council in 1986, his biggest champion was his wife, who did everything to ensure his victory. She was on several commissions, but particularly enjoyed being a member of the Beverly Hills Fine Arts Commission. Throughout the entirety of their marriage until Max died in 2010, the Salters traveled extensively around the globe, meeting many dignitaries, according to her children.

Longtime friend Marilyn Ziering, who with her husband used to travel the world with the Salters, recalled the many fun trips that they shared.

“She was a great friend. We had a lot of fun together. She loved life. She loved the arts, music and she just loved people. And she was a wonderful person to be with. And I love her very much,” she recalled.

Those wishing to honor Salter can send a gift to a charity of their choice or to “Happy Trails for Kids,” 2525 Ocean Park Blvd., Ste. 104, Santa Monica, CA 90405, Attn: The Salter Scholarship Fund.