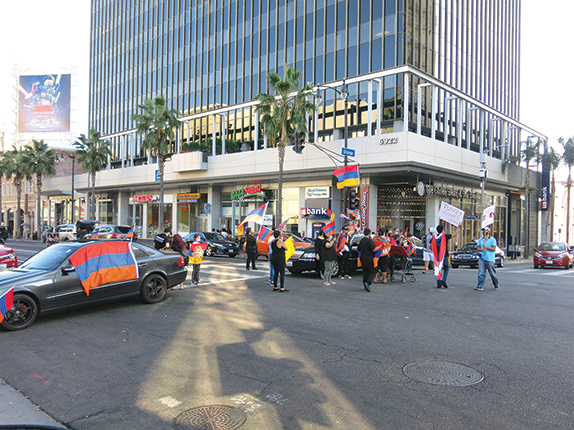 Protests continue in Hollywood and elsewhere in greater Los Angeles regarding the conflict in Artsakh. (photo by Cameron Kiszla)

“We are deeply troubled by Azerbaijan’s refusal to honor three separate ceasefire agreements in recent weeks and the continued campaign to spread misinformation to deflect their egregious actions,” said Barger, chair of the Los Angeles County Board of Supervisors. “I am grateful to National Security Advisor Robert O’Brien and United States Senator Mike Lee for engaging with our grassroots organizations and faith leaders who have done a tremendous job raising awareness on this pressing issue for the Armenian community.”

“The United States is deeply concerned about the escalation of violence between Azerbaijan and Artsakh, especially in light of reports of strikes in areas of significant civilian populations,” O’Brien said. “The president has called on both sides to fully observe their obligations under international humanitarian laws, including the protection of civilians and civilian infrastructure. Both sides must agree to a ceasefire and they must come to the negotiating table without preconditions. This is particularly true of the Azerbaijanis, who have been the most hesitant about an unconditional ceasefire to date.”

The focus of the dialogue centered on the unprovoked military operations by Azerbaijan in the Nagorno-Karabakh region against Armenians in the area. This ongoing military offense has included attacks on civilian and residential structures, which killed approximately 40 innocent civilians including children and older adults and wounded more than 125 people, according to the Office of the Human Rights Ombudsman of Artsakh.

Los Angeles County is home to the largest population of Armenians outside of Armenia. For years, the county has supported the Armenian community through continued advocacy for their rights and increased awareness of their history.