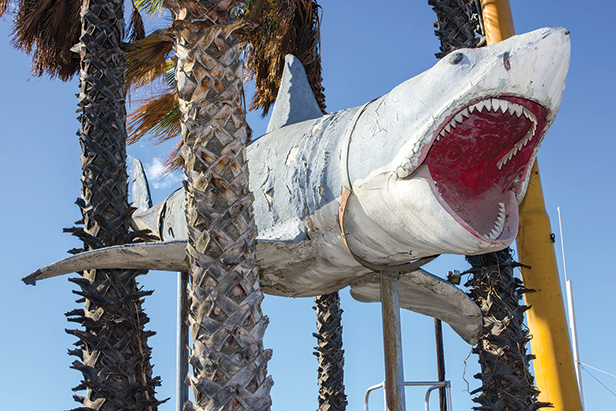 Bruce the Shark from the movie “Jaws” has been installed at the Academy Museum of Motion Pictures. (photo by Michael Palma/©A.M.P.A.S.)

The Academy Museum of Motion Pictures has completed the installation of one of the most iconic objects from its permanent collection, the only surviving full scale shark model from the 1975 Oscar-winning film “Jaws.” The Academy Museum’s much-anticipated opening will be on April 30, 2021, and the 25-foot model – nicknamed Bruce the Shark – will be on view free to the public. “Jaws,” directed by Steven Spielberg, won Oscars for Film Editing, Sound and Original Score, and was nominated for Best Picture at the 48th Academy Awards in 1976.

The monumental model is the fourth, final and only surviving version of the shark model derived from the original “Jaws” mold. The creation of the infamous mechanical shark – which Spielberg is rumored to have named Bruce after his lawyer – was tasked to art director Joe Alves, whose original schematics depict the 25-foot-long body, 400-pound head and jaws nearly 5 feet wide. The three screen-used production molds were cast in latex and the rubber rotted and they were destroyed. The Academy Museum’s version, cast in fiberglass for photo opportunities at Universal Studios Hollywood surrounding the film’s 1975 release, survived at Universal until 1990 when it found its way to Nathan Adlen’s family’s junkyard business in Sun Valley, California. In 2010, it was authenticated by Roy Arbogast, a member of the original “Jaws” film’s special effects crew, and in 2016, the Academy Museum acquired the shark model through a contribution by Adlen. The museum worked with special effects and make-up artist Greg Nicotero, co-founder of KNB EFX, to meticulously restore the fiberglass shark which had deteriorated from being outdoors for 25 years.

Since the shark is so large, it is unable to fit in the museum’s elevators. Instead, a team of art handlers, engineers and construction workers removed two panels from the Saban Building’s curtain wall of glass and craned Bruce into the building.

Bruce is now suspended 30 feet above the third floor of the Academy Museum. In its new location, Bruce will be visible from many vantage points within the museum and to passersby outside on Fairfax Avenue and Sixth Street.

“It’s been a long journey for Bruce since he was acquired in 2016, and we couldn’t be happier to welcome him to his new home,” said Bill Kramer, director and president of the Academy Museum.