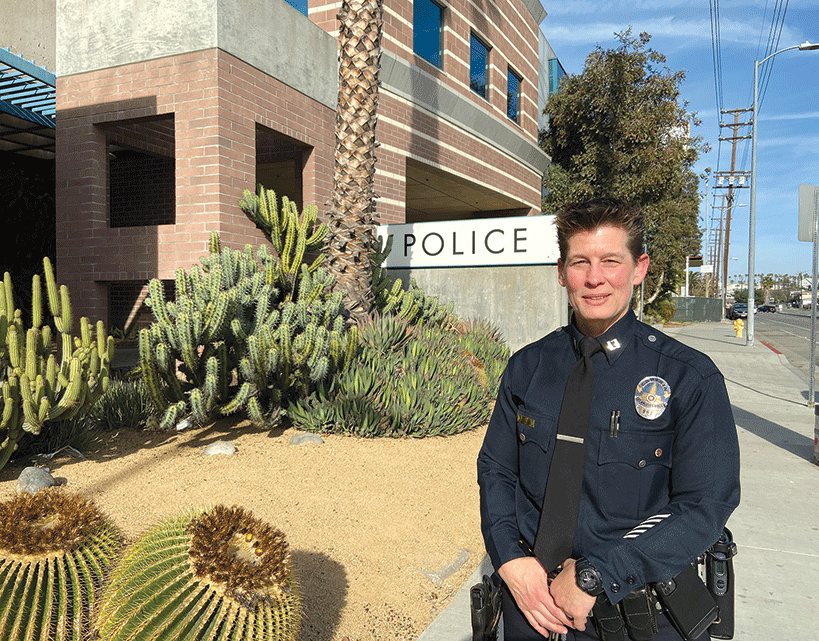 The forum was held by neighborhood organizations in the Miracle Mile, Sixth Street-Miracle Mile, La Brea Hancock and Sycamore Square areas. Members of the groups collectively call themselves the “Four Corners” because they converge at Wilshire Boulevard and La Brea Avenue. Sycamore Square Neighborhood Association member Conrad Starr said the collaboration started in 2017 when members came together over coffee to share information and focus on disaster preparedness.

The virtual forum included information about the importance of signing up for neighborhood-watch programs and disaster-preparedness training. Starr and Miracle Mile Residential Association member Kari Garcia provided updates on how people can get involved by joining the different resident associations.

Paulson said training and neighborhood watch involvement are helpful ways residents can support the department, which has to prioritize the deployment of officers and resources on a case-by-case basis. During incidents such as an earthquake, the police and fire departments may not be able to respond quickly, so the more prepared residents are the better, she said.

Among the topics at the forum was the recent civil unrest that occurred at the end of May in the Fairfax District and surrounding area. Stores in the Four Corners community were looted, including the Target at La Brea Avenue and San Vicente Boulevard and the BevMo at La Brea and Wilshire Boulevard. Many residents in the area fear unrest will occur again, particularly with the upcoming election, Starr said.

Paulson said there is no evidence any unrest will occur in the coming weeks and added that police are monitoring in many different ways to deter problems.  She did not specify what tactics are being used.

She said the Wilshire Division was at the center of the protests in Los Angeles following the death of George Floyd and most were peaceful and nonviolent demonstrations, with the exception being the May 30 clashes between demonstrators and police in the Fairfax District. Paulson said some instances of violence that occurred involved people who were not part of the initial demonstrations and arrived later allegedly intending to cause violence.

Paulson, who has served with the LAPD for 29 years and was a newly minted patrol officer when the Los Angeles Riots occurred in April 1992, provided a comparison of what happened in 1992 and the clashes with police and looting last May. The captain, who is also an Iraq War veteran, said the tactics used by those committing violence in the Fairfax District in May were far more organized.

“The advent of technology and social media provided for a platform on which a coordinated effort, almost militaristic-type tactics, and I say that as a combat veteran, were utilized in order to engage in offensive maneuvers against the police department, specifically targeting police officers, police cars, etc.,” Paulson said. “We had people showing up to these protests who clearly had the full intent of creating a violent encounter. And that was very obvious in the manner that they showed up at these protests with backpacks full of items with which to engage in an offensive campaign against law enforcement, with backpacks full of lighter fluid, with backpacks full of pre-packaged bottles of urine and feces, and frozen bottles of water that can be thrown and are hard as a rock or a brick.”

Paulson said the violence on May 30 stands in stark contrast with the demonstrations that followed, and credited organizers who denounced the violence and became more organized themselves for making a difference. In some cases, protest organizers used social media to learn about places where potentially violent protesters planned to join a march and avoided those areas, she added.

Paulson also allayed fears that more civil unrest may threaten neighborhoods, stating that is a very unlikely scenario. She said the best thing for people to do is prepare, band together, monitor social media and news reports, and disseminate accurate information to other residents so that rumors and falsehoods don’t spread. Paulson said people should call 911 for legitimate emergencies and assured participants that officers will respond. However, she warned against a growing trend of people calling police and stating a situation is more severe than it really is to get officers to a scene more quickly.

“Remember, our officers are juggling many different calls,” She said. “When somebody embellishes a call, they are placing themselves in a higher category of priority and that could jeopardize someone’s else’s safety.”

Lastly, the captain encouraged people to prepare by taking advantage of the many partnerships the police department has with the community. By building relationships with senior lead officers and participating in programs such as the police station’s community advisory board, residents and stakeholders can get involved and will know where to turn when problems arise.

Starr added that the forum was informative and he hopes people will consider joining their neighborhood associations. Information from the Four Corners’ forum is available by visiting the Miracle Mile Residential Association’s website at miraclemilela.com/safety-committee.

Paulson will participate in another forum held by the Greater Miracle Mile Chamber of Commerce today, Oct. 8, from 11:30 a.m. to 1 p.m., via Zoom. For information, email info@miraclemilechamber.org.

LOL what does she think is going to happen if Trump wins reelection, or worse, loses and contests the results? The george floyd protests will be childs play compared to the mad max style dystopia that will engulf this city