Phylicia Rashad and Mamoudou Athie star in “Black Box,” part of the “Welcome to the Blumhouse” anthology on Amazon Prime. (photo courtesy of Amazon/Blumhouse)

“Once you commit to a television format, you’re a TV movie,” he told ITV last year.

The pushback was instant, especially considering the large number of cinephiles who can’t afford weekly outings or prefer a more intimate big-screen experience at home. Then a pandemic hit, rendering those boundaries even more meaningless.

A new Amazon Prime venture continues to blur the lines, premiering individual films as an eight-part horror anthology series, “Welcome to the Blumhouse.” Producer Jason Blum’s company has quietly dominated horror cinema for over a decade, creating a sea of multi-film franchises: “Paranormal Activity,” “The Purge” and “Insidious.”

Blumhouse Productions also dips into critical territory with the likes of “Get Out” and non-horror “Whiplash,” but the “Welcome” project arrives courtesy of Blumhouse Television (again, complicated distinctions), which seems to put the debate to rest – kind of.

The new series builds on a similar one – also from Blumhouse – on Hulu, “Into the Dark,” featuring 24 “feature-length episodes,” as they’re called across multiple reviews, that play like the “Black Mirror” episodes that tend to win awards for television features. That confusion continues here as two films (are they episodes?), dropped on Prime Tuesday: “The Lie” and “Black Box.”

If these installments are conceptually connected, then opening shots featuring newborns is the common thread, followed by something that breaks families apart: divorce, a fatal accident, all around bad choices, etc. 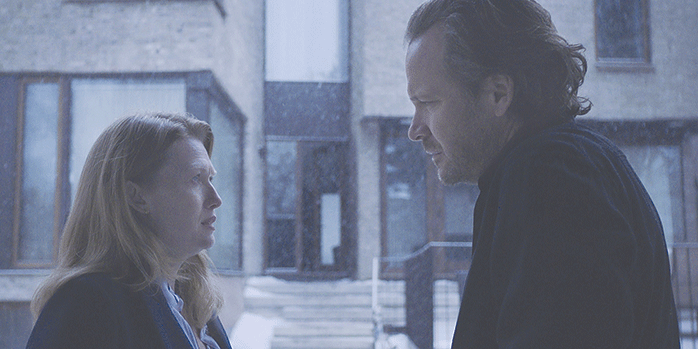 Mireille Enos and Peter Sarsgaard appear in “The Lie,” another suspenseful entry in “Welcome to the Blumhouse.” (photo courtesy of Amazon/Blumhouse)

“The Lie” reunites alumni from AMC’s “The Killing,” both lead star Mireille Enos, the mother here, and series creator Veena Sud, directing her sophomore feature (or continuing her long-established TV career, if Spielberg has his way). Add to the Sud canon Peter Sarsgaard, as the father (divorced from mom) and Joey King (“The Conjuring,” “Slender Man”), their daughter who admits to something terrible that kicks off the central conflict.

It’s all very on brand for Sud and Co. but hardly makes for a tense horror ride. But the production for each entry (perhaps a safer word) is as diverse as the projects themselves, directed by women and people of color, featuring stories that straddle supernatural and science fiction elements, along with the more mundane murder-mystery tropes. At least that’s the case for the first four entries dropping by twos a week apart.

Thus far, “Black Box” is the first one created specifically for “Welcome.” That doesn’t exactly mean much when differing it from “The Lie,” though it is a bit better – a bit. It’s all in the premise: father and widow Nolan (Mamoudou Athie) suffers memory loss so debilitating that he can’t perform his previous job as a photojournalist or consistently care for daughter Ava (Amanda Christine). Then comes an experimental procedure proposed by Dr. Lillian Brooks (Phylicia Rashad) involving a black box.

Nolan enters his unconscious mind in search of lost memories, but each unfamiliar moment in time invites an unwelcome guest, the Backward Man, played by contortionist Troy James (“America’s Got Talent,” CW’s “The Flash”). Those brief sequences feature all the scares, and “The Lie” doesn’t bode much better (if at all).

Certainly, budgetary restrictions can culminate in accidental (“Jaws”) and strategic successes (“The Blair Witch Projects” and its many found-footage kin). Not here. These stories heavily stress mystery and drama, often bypassing the primary genre’s visceral pleasures, like many TV productions.

As feature-length episodes, “The Lie” and “Black Box” play like high-budget TV viewing, even if plotlines dip into cliche territory. But if they are films, they belong to a long line of low-budget, independent productions that enjoy limited releases or direct-to-video distribution.

So, are they films? Again, kind of. “The Lie” premiered at the Toronto International Film Festival in 2018, even receiving a ReVamp Stamp, awarded to the alleged film as a “narrative feature” for “gender-balanced” filmmaking.

Then an Amazon acquisition morphed it into an episode for “Welcome to the Blumhouse,” a clever throwback title that invokes horror’s affinity for haunted residences.

And then there’s other “Welcome” projects like “Evil Eye,” arriving on Tuesday, which came from Bollywood actress Priyanka Chopra’s (ABC’s “Quantico,” “The Sky Is Pink”) production company, clearly created as a film and sold to a distributor. The distinction between film and TV continues to erode.

Frankly, this debate seems fruitless, especially now. Pandemic moviegoing remains in an indefinite state of limbo. Regal announced closures amidst delays from major studios, though AMC and Cinemark will press on. At least for now, let’s call these Blumhouse Television flicks what they really are: films. Enjoyable films to a degree, though they won’t win any major awards, but films nonetheless.

‘Under the Same Moon’ Festival