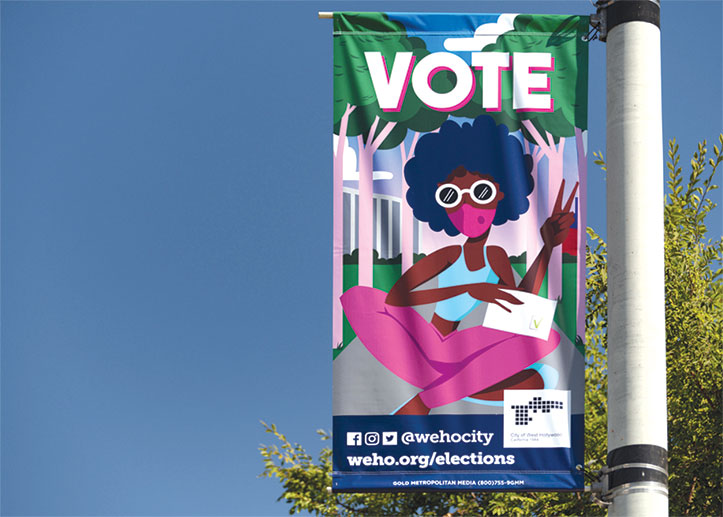 The city of West Hollywood has proclaimed October 2020 as Get Out The Vote Month.

As part of continuous efforts to increase voter participation, the city reminds community members that each vote counts and everyone’s voice matters. During October, the city is raising awareness and educating residents about the importance of voting in the upcoming Nov. 3 General Election. West Hollywood’s Municipal Election is also on Nov. 3 and will be conducted by the Los Angeles County Registrar-Recorder/County Clerk. In addition to federal, statewide, and countywide votes, West Hollywood residents will cast votes for two members of the West Hollywood City Council and decide on one a city ballot measure for increasing the sales tax.

As part of the observance of Get Out The Vote Month, the city is displaying 85 light pole banners created by West Hollywood-based Artist Miguel Andrisani, also known as Migs. He developed a selection of original “VOTE” artworks with engaging and diverse illustrations of people who embody three ways to vote: mail, ballot drop-off and in-person vote centers. The banners, as well as social media graphics and additional printed and digital materials, will encourage participation in the election.

In 2018, Andrisani created a triptych installation at West Hollywood City Hall called “I See You WeHo” based on former Poet Laureate Kim Dower’s poem “I Sing The Body West Hollywood.”

Additionally, the city will host a virtual Election Information Town Hall via Zoom on Tuesday, Oct. 13, from 5 to 6 p.m.

For information on West Hollywood programs and the upcoming election, visit weho.org.