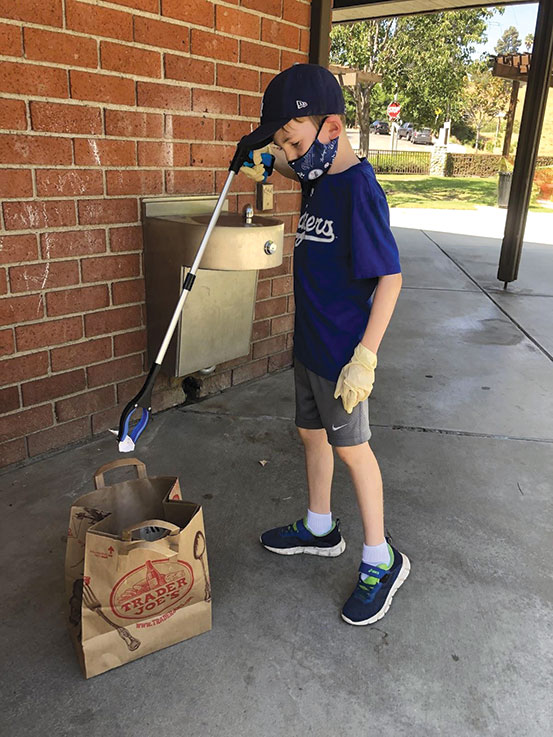 A West Hollywood Elementary School teacher is showing that people of all ages can make a difference during trying times, including her first-grade students.

Erica Grech noticed that her 21 students were often confined indoors during the pandemic, and when it came time to teach the design thinking process earlier this year, Grech saw an opportunity.

“These children, they’re stuck at their house and they don’t get to get out much. They’re bored, and I want to make this a hands-on thing. They’ll learn more and remember more,” Grech said.

So, she challenged her students to identify a problem in their life and use the skills of being a good citizen to show how things could be improved.

“It starts out with children empathizing … go out and take a walk in your community, and when you’re walking, what catches your eye, what hurts you and what don’t you like?” she said.

Those students came back with a variety of issues. While some children noticed inconveniences like owners who don’t clean up after their dogs – “They don’t like [dog mess] on the ground because it’s in the parks that they play in,” Grech said – others were issues that have stymied adults for generations, including litter and homelessness.

Over the course of a month, the students then developed ways to help, including raising awareness of issues, touting potential fixes in public-service announcements, organizing clean-up drives for litter and creating meals for people experiencing homelessness, as first-grader Mason Soskin did.

“He made all the bags of lunches for the homeless people and introduced himself to them, because he wanted them to know his name,” Grech said. “I thought this was nice because it had that personal touch … he wanted it to be personal to them that he made the lunches for them.” 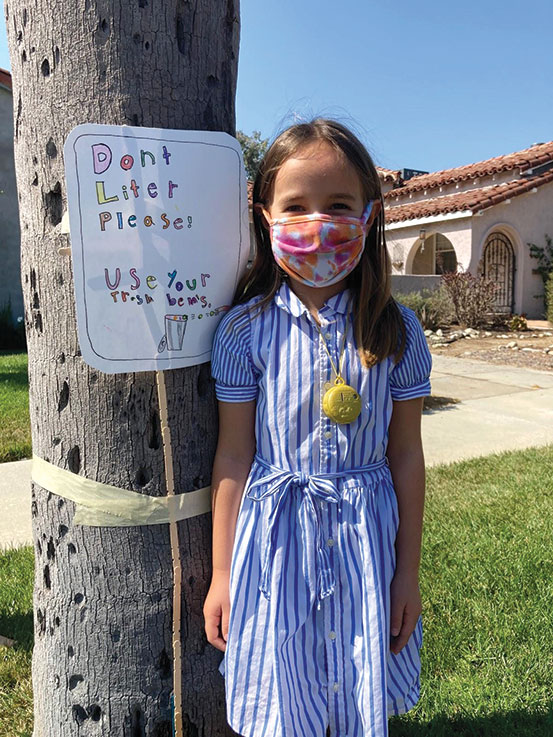 Harper Trovato encouraged people to throw trash away instead of littering. (photo courtesy of Erica Grech)

In his report describing his plan of action, Soskin said he realized that “others can help fix this problem too.”

Kamia Kamran, who produced a PSA about littering, said in a video describing her project that she noticed that “the ground is dirty, and so are the beaches, and probably the water, too.”

“Let’s stop littering … Let’s have a clean-up day,” she said. “We want to be responsible for our Earth because landfills pollute the Earth. Let’s start planning. We’ll put on our gloves and start cleaning.”

Grech said the practice was as much about the kids as it could be, and parents were discouraged from helping unless it was absolutely necessary.

“This gives [the students] a little bit of power. They realize there’s a difference they can make in their community,” Grech said.

Grech added that she hopes the realization that even one person can make a difference will continue through the rest of her students’ lives.

“Even though they’re 6 years old, there are things they can do with a day of action or educating people or bringing awareness to certain situations,” Grech said. “It showed so much growth in them as a child, and this is what teaching should be. They’re going to remember them and get more involved in things, hopefully, as they get older. As an adult, it was eye-opening. We’re all sitting at home during a pandemic, but there are things we could be doing.”