WeHo council speaks out against sheriff 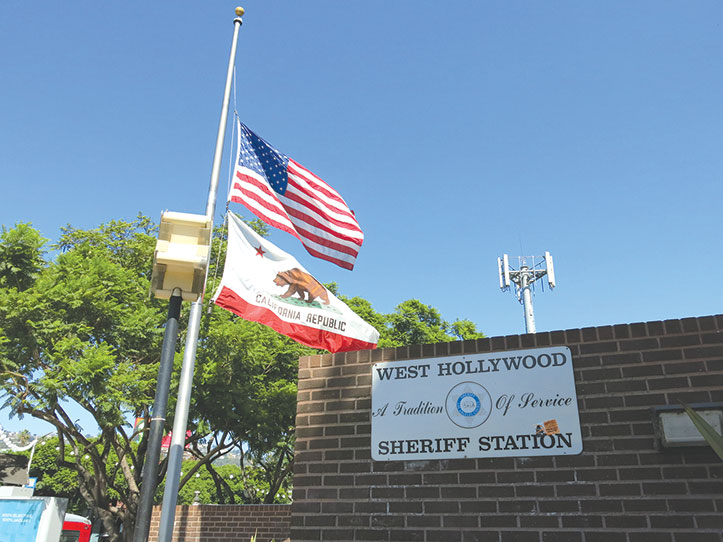 Though council members said they support the deputies of the West Hollywood Sheriff’s Station, they took issue with the works and actions of L.A. County Sheriff Alex Villanueva. (photo by Cameron Kiszla)

During their comments, several council members raised concerns about Villanueva, including the use of the name “La Malinche” to describe Los Angeles County Supervisor Hilda Solis, 1st District, in a July Facebook broadcast filmed while wearing his uniform and in his office. Solis had spoken out about the relationship between police and people of color after the killing of George Floyd, and “La Malinche” is the name of the Indigenous translator for Hernán Cortés as he conquered the Aztecs. The name is often used as a slur to connote a treacherous woman, similar to the name “Uncle Tom” for African Americans.

A request for comment from Villanueva was not returned before press time.

Villanueva has also faced criticism for the arrest of LAist and KPCC reporter Josie Huang, who was covering the protests after two LASD deputies were shot on Sept. 12. After Huang’s arrest for allegedly obstructing justice, Villanueva faced intense public scrutiny, including from Supervisor Sheila Kuehl, 3rd District, who represents West Hollywood and joined several members of the L.A. County Sheriff Citizens Oversight Commission in calling for Villanueva’s resignation.

On Sept. 17, a statement from the LASD criticized the commissioners’ call for Villaneuva’s resignation.

“The fact this motion [to call for Villanueva’s resignation] is even being considered, particularly when two members of our department are recovering from a life-threatening ambush, is morally repugnant and emblematic of the political animosity of the politically appointed commission,” the statement said. “It is becoming painfully obvious this commission is acting in retaliation against the sheriff for his efforts in investigating potential criminal conduct from county officials and for challenging the legality of subpoenaing the sheriff himself versus the LASD.”

In the Sept. 21 West Hollywood City Council meeting, Councilwoman Lauren Meister suggested that the city take a stand behind Kuehl.

“Maybe we should be prepared to take some sort of action in terms of supporting our county supervisor,” Meister said.

Councilman John D’Amico thought the city’s Public Safety Commission could host a public hearing, as “the elected sheriff has made some very complicated statements in recent days and taken some very complicated positions that may or may not be in accordance with how we think here in West Hollywood.”

“I think it is time for our city to take a position on what our elected sheriff is saying regarding policing generally and our city and our neighboring communities,” D’Amico said.

Meister approved of the matter going before the commission, adding that “this needs to be addressed.”

Mayor Pro Tempore John Heilman said he thought the item could come directly to the council.

“There are actions that the sheriff has taken that are certainly inconsistent with our policies as a city, and I think it is up to us as a council to express our concerns and express our condemnation for certain things. The appropriate method for doing that, I’m going to leave that to our city staff to figure that out. We don’t want to condemn all of the good people who we know work here locally, but the sheriff’s actions have been, I think, inconsistent with our views,” Heilman said.

Mayor Lindsey Horvath noted that while the West Hollywood station does “good work,” there are “issues that we’re seeing throughout the department beyond our city, as well as issues happening throughout the country.”

The killings of civilians by police have sparked a nationwide protest movement. On June 18, an LASD deputy shot and killed 18-year-old Andres Guardado in South Los Angeles. An autopsy commissioned by the Guardado’s family found that he was struck in the back by five bullets while he was running away, and the Los Angeles County Medical Examiner-Coroner’s office echoed those findings in its own autopsy.

Horvath also criticized Villanueva’s decision to rehire a deputy who was accused of domestic violence, and she supported a Congressional investigation into the alleged gangs of deputies in the LASD. Horvath proposed using the public-safety update scheduled for the Oct. 5 council meeting to discuss the city’s policy on use of force by law enforcement.

“We have to keep making sure that we are continuing to raise these issues and call out the behavior that isn’t consistent with what West Hollywood stands for,” Horvath said.

Councilman John Duran did not comment on Villanueva during the Sept. 21 meeting, though he and Heilman both criticized the sheriff during a Sept. 16 candidate forum hosted by the Israeli-American Civic Action Network and Congregation Kol Ami. Heilman said Villanueva was “not the right person for the job,” and Duran said he was not a supporter of Villanueva’s. Heilman and Duran also criticized Villanueva for not holding his officers accountable.

“Not all his cops are good cops. There are bad deputies, and he has to deal with them if he wants people to start to trust law enforcement again,” Duran said.

No tricks this Halloween due to COVID-19 concerns