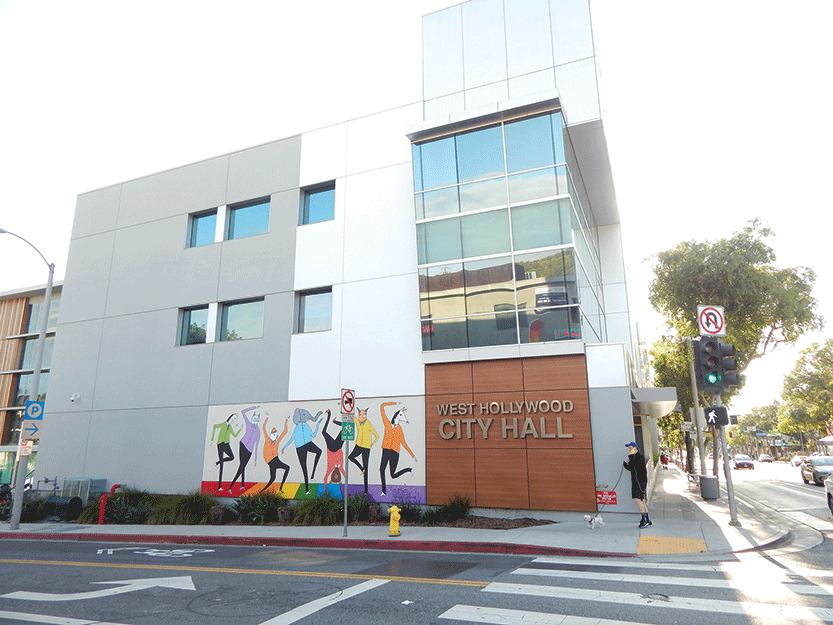 The League of Women Voters of Los Angeles coordinated the questions for the Oct. 6 West Hollywood candidates forum. (photo by Edwin Folven)

West Hollywood voters got another chance to hear from many of the candidates for City Council on Oct. 6, as the city and West Hollywood Chamber of Commerce hosted a forum featuring nine of the contenders for the two seats that are open on Nov. 3. The League of Women Voters of Los Angeles selected the questions, which were asked by NBC4 anchor and reporter Robert Kovacik.

The format for the Oct. 6 forum varied from some of the past forums in that some broad topics were broken up into three different but similar questions, which were then each asked to three of the nine participating candidates: Larry Block, John Erickson, Noemi Torres, John Heilman, Sepi Shyne, John Duran, Jerome Cleary, Marco Colantonio and Mark Farhad Yusupov.

On the topic of the city’s economic climate, Block, Erickson and Torres were asked what the city has done right, done wrong and still needs to do in regard to COVID-19.

Block, who owns the Block Party WeHo boutique on Santa Monica Boulevard, pointed out that “the City Council failed to provide masks for residents” during the pandemic. He also supported more Outdoor Use Temporary Zones for West Hollywood businesses and placing signs about COVID-19 guidelines in the common areas of residential buildings, which the City Council recently approved.

“I’ve been working every single day since the pandemic, keeping my store alive and the pulse of the LGBT community in the heart of the city, while my neighbors are all struggling. I’ve been … trying to develop plans for the future for all of us to come back,” Block said.

Erickson praised the city “for taking quick action” on protecting renters with its eviction moratorium and a rent-relief program.

“The thing that the city did right, right away, was protecting people and making sure that we’re keeping them safe in their homes,” he said.

Erickson also praised the city’s “working to get ahead where we could on the business community.”

“Ultimately, what we need to look toward in the future is how we’re building coalitions with our business partners, with our renters, with our homeowners, with everyone to make sure we’re looking forward to getting our city back,” Erickson said.

Torres highlighted the impact of the pandemic on small businesses. She said she’s been reaching out to those businesses to find out what would help them best, and she encouraged the city to do the same.

“I believe that it’s important for us to know what the businesses are needing,” she said.

She applauded the city for its work with renters and with businesses so far, but said more openings will be needed to spur the city’s economic recovery.

“We need to make sure we can open safely as soon as possible,” Torres said.

Heilman, Shyne and Duran were asked if they would support a vacancy tax to encourage property owners to fill empty commercial space.

Heilman, an incumbent who has served on the council for all but a few months since the city’s founding in 1984, argued that a vacancy tax would be hurtful to the business community.

“Vacancy taxes on commercial spaces are not a good idea. That ends up penalizing people, and we should be looking at incentivizing businesses,” he said.

Instead, Heilman suggested looking into pop-up stores, which require less initial overhead and, if successful, could turn into long-term businesses.

He also pointed out that the city is working to reduce the regulatory burden on businesses and allowing for shared parking to offset the parking shortage.

Shyne, an attorney and owner of two small businesses, said “a vacancy tax by itself could be hurtful.”

She suggested a vacancy tax could be “coupled with some creative solutions” to ensure that businesses have a chance to succeed, including small businesses and mom-and-pop operations.

“We need to look at alternatives for smaller-sized places … so that small businesses that don’t need that much space to occupy don’t have to pay that much rent,” she said.

Duran, an incumbent who has served on the council for two decades and is running for a final term, said he thinks a vacancy tax is “a really bad idea” that “incentivizes filling a space quickly instead of thoughtfully.”

Duran also said the city is looking at “reregulating properties as a live-work space, so that people can not only work along commercial corridors, but live alongside the back side of those units as well.”

Cleary, Colantonio and Yusupov were asked about the obstacles facing small businesses in West Hollywood.

Cleary suggested that the city and the West Hollywood Chamber of Commerce could partner with a different local business each week for a marketing campaign.

Cleary added that some of the small businesses that have been hurt by the pandemic could be hurt again by a lengthy construction process for Metro’s Crenshaw Northern Extension, which West Hollywood is seeking to bring to the city.

“I would be very concerned, and as we look toward the future, what are we going to do to help those businesses, maybe with a low-interest loan or something to help them keep their business afloat,” Cleary said.

Colantonio suggested that the city could extend the commercial rent moratorium past the Jan. 31, 2021, expiration date.

He also suggested that the city should create a small-business task force and that the city could help mediate between struggling tenants and landlords to help keep small businesses – which he would characterize by sales, not number of employees – open.

“We need to force the landlords to negotiate and be a little more sympathetic,” he said.

Yusupov said the city needs to help small businesses connect with assistance, including grants and other financial aid from the state and federal governments. Yusupov also echoed the call for creating smaller spaces for businesses to occupy.

“If there are more small places, more small businesses can be renting the place out,” he said.

Yusupov also encouraged small businesses to band together in certain locations to attract customers. For instance, one area could be made up of artisanal cheeses and wine stores so that “people know that entire block sells similar [items],” he said.

On the topic of transportation, Shyne, Duran and Heilman were asked if they supported using city funds to help accelerate the Crenshaw Northern Extension even though the ongoing economic downturn could hurt cities financially.

Shyne said she would support using city funds, as the rail line would “bring so much positivity not only to our city, but regionally.”

“It will be wonderful for working against our climate crisis, and the benefits far outweigh the economics. However, with that said, we need to come up with very creative solutions that will benefit us economically and not put such a huge burden [on us] as a city,” she said.

Duran said he “absolutely” supports using city funds to help bring the rail line to West Hollywood, and he added that he’d like to see Metro build a subway along Santa Monica Boulevard with stations at Fairfax Avenue, La Brea Avenue and San Vicente Boulevard. Then, housing, shops and even a theater could be built near the station entrances, he said.

“A lot of economic development can happen at subway stops,” he said.

Heilman also said he is in support, and detailed the years-long efforts by West Hollywood officials, including Mayor Lindsey Horvath and himself, to bring Metro rail service to the city. He echoed the economic and environmental benefits to having more people use public transit instead of driving in their cars.

“This is really the time to do it. This is the time where we need to invest in our future,” he said.

Colantonio, Yusupov and Cleary were asked how to address traffic in the city.

Colantonio said he’d rather focus on safety than traffic.

“We’re a pass-through city, and we’re always going to have traffic,” he said. “It’s not a major issue. Safety is a major issue for me.”

Yusupov agreed that safety is the more important issue. He said traffic is “unavoidable” and echoed the call for speed bumps and expressed support for safer crosswalks to keep pedestrians safe. He also said he wanted to direct traffic to the main boulevards so “the smaller streets can see less traffic.”

“The more we can incentivize our local people not to take cars when they don’t have to, that would be a good step,” he said.

He added that he’d like to see a bus line take a direct route back and forth to the east and west sides of the city.

“Traffic is always going to be a problem in our city,” he said.

Cleary suggested that synchronized traffic lights might help the flow of cars, but real change would come when residents and neighbors are consulted about how traffic could be changed in their immediate vicinity.

“I think we have to do outreach to neighborhood groups and neighborhood watches to see what their problems are and how to improve circulation,” he said.

Erickson, Torres and Block were asked about other mobility options, including electric scooters – which are allowed to pass through West Hollywood but cannot start or stop rides in city limits – and app-based ride-hailing services.

Erickson expressed support for micromobility, which includes the electric scooters that are often seen on sidewalks in Los Angeles.

“We need to look at how these micromobility [devices] affect traffic as a whole,” he said.

Erickson suggested that, given more bike lanes, micromobility users could remain safe and off sidewalks, where they can be dangerous to pedestrians.

“We need to do everything we can as a city to protect our residents through public safety by making sure that people who use these options are safe and can get from La Brea to Doheny in one piece,” he said.

Torres also expressed support for “the increase of bike lanes where they’re nonexistent.”

She added that she wants to look at “out-of-the-box ideas,” including potentially having bike lanes travel down some side streets and allowing scooters “in a way that’s going to be safe for pedestrians and [riders].”

“As John [Erickson] said, we want to make sure they’re not being hurt … There are creative ideas, and we have a lot of work to do on that,” she said.

Block declined to comment on micromobility, but referred back to an earlier question on the Metro plan, stating he wants rail service to come to the city’s edges, but not through the city.

The rail stations are “where homeless migrate,” he said, and by adding rail service to the interior of the city, “we are going to enhance our homeless problems.”

Block also said he supports Proposition 22, which would allow the drivers for Uber, Lyft and other ride-hailing companies to remain independent contractors instead of employees.

“If they become employees, [the companies] will pull out and we won’t have ride shares,” he said.

West Hollywood residents will choose which two candidates will serve four-year terms on Nov. 3, and the nine forum participants will be joined on the ballot by two other candidates, Christopher McDonald and Tom Demille, who did not participate in the forum but will appear on the ballot, according to the city’s website.