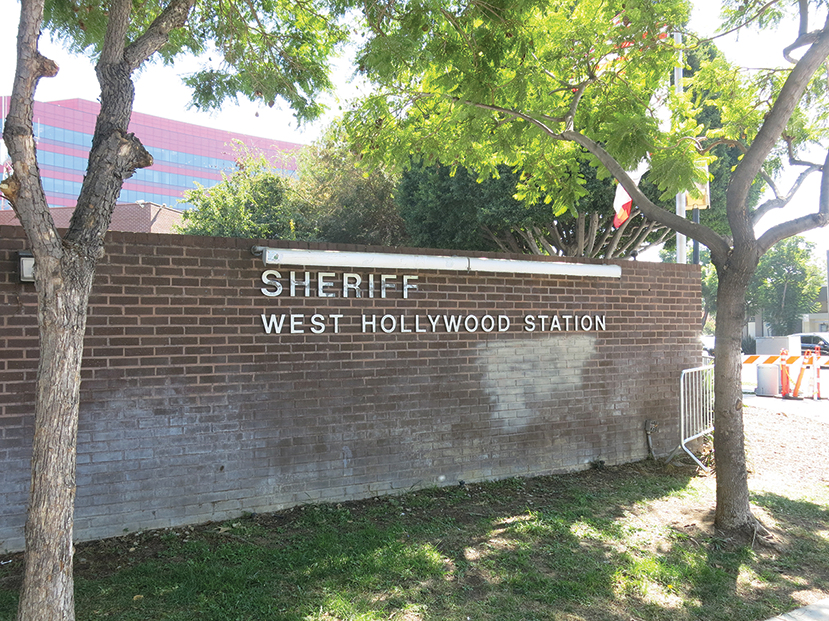 West Hollywood will have its Public Safety Commission examine the city’s use-of-force policies for law enforcement. (photo by Cameron Kiszla)

In addition to receiving updates from Capt. Edward Ramirez and Lt. Bill Moulder of the West Hollywood Sheriff’s Station and acting Assistant Chief Drew Smith of the Los Angeles County Fire Department, the council members voted unanimously to have the city’s Public Safety Commission consider West Hollywood’s use-of-force policy and to support a request by U.S. Rep. Jimmy Gomez (D-Los Angeles) to have the U.S. Department of Justice investigate the alleged gang activity within the Los Angeles County Sheriff’s Department. The LASD is contracted to provide law enforcement services to West Hollywood.

Much of the use-of-force discussion centered on an incident on Sept. 25, when members of the Sheriff’s Response Team were shown in videos posted online arresting a suspect during a protest, and one deputy was shown hitting the suspect in the ankle with a shield.

Ramirez said what happened that night was “an anomaly of sorts.” While many protests related to the Black Lives Matter movement have been peaceful, a poster for the Sept. 25 Justice for Breonna Taylor protest included an image of someone throwing a Molotov cocktail and the words “absolutely no peace police.”

“Needless to say, this group quickly established they were not here for ‘good trouble,” Ramirez said, echoing the words of the late U.S. Rep. John Lewis, whom Ramirez cited as a role model.

After confrontations between protesters and the driver of a car that went through the protest but did not strike or injure anyone, Ramirez said he ordered that two trucks that were part of the protest be removed. When deputies tried to arrest one of the drivers, a protester shoved a deputy, leading to the struggle in which the suspect was struck with the shield, Ramirez said.

“Assaulting one of my deputies was the catalyst for what we witnessed, and our deputies took quick, decisive action,” Ramirez said.

Ramirez said a use-of-force investigation is ongoing, and he “respectfully ask[ed] that we reserve judgment until the investigation has been completed.”

After the council’s vote, the Sept. 25 incident will be part of a larger discussion of the use of force by law enforcement in the Public Safety Commission meeting.

“First and foremost, our responsibility is to keep our community safe, and we can and should have discussions about what sheriff department protocols are, because I know that a lot of the videos that I saw were quite upsetting and caused a lot of concern in the community,” Mayor Lindsey Horvath said.

The council also followed up on their Sept. 21 discussion, in which several council members criticized the words and actions of Los Angeles County Sheriff Alex Villanueva. The council’s Oct. 19 decision to support the investigation into the alleged gang activity in the LASD follows last month’s support for Los Angeles County Supervisor Sheila Kuehl, 3rd District, who joined the L.A. County Sheriff Citizens Oversight Commission in calling for Villanueva’s resignation.

On Oct. 19, however, Councilman John D’Amico pushed back against the calls for Villanueva to resign. Though he noted “concern” with Villanueva’s leadership, he made clear he wanted West Hollywood “to have a relationship with the sheriff” and find common ground in order to bring about positive change, as “there’s a lot of work to do.”

During the discussion, the council also received an update on its request to have the Center for Policing Equity study data from the West Hollywood Sheriff’s Station to recommend ways to improve justice and equity in policing.

Kristin Cook, the city’s public safety director, said after the killing of George Floyd by Minneapolis police, CPE is “overwhelmed with national requests for assistance,” but if the organization has time to work with West Hollywood, it will likely happen at the end of this year. For West Hollywood to provide data to CPE, approval will be required from the county, Cook added.

During his biannual update, Ramirez also highlighted some of the reductions in crime in West Hollywood, including “unprecedented declines” in vehicle burglary, theft and robbery over this time last year, and pointed out that the use of body-worn cameras for deputies began earlier this month.

“Once the entire station is trained, every deputy assigned to patrol West Hollywood will be mandated to wear one. The West Hollywood Station is excited at the prospect of being one of the stations chosen to participate in this pilot project, as body cameras will not only provide a heightened level of police transparency, but assist in increased public confidence at both the local and national level,” Ramirez said.