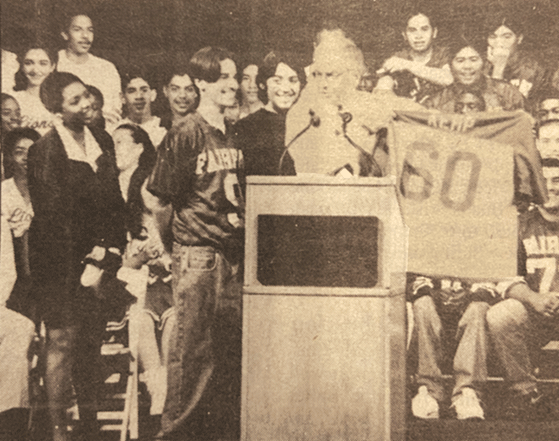 The Oct. 24, 1996, issue of the Park Labrea News and Beverly Press showed then-Vice Presidential Candidate Jack Kemp at his alma mater, Fairfax High School, where he spoke to students and received a football jersey commemorating his time on campus in the early 1950s. Kemp, who at the time was the vice presidential running mate of Republican candidate Bob Dole, gave a speech about the importance of diversity and equality. He said one of his favorite things about growing up in the Wilshire area and attending Fairfax High was “going to Canter’s” for a snack, the accompanying article stated. Kemp enjoyed a long career in the American and Canadian football leagues, playing for the San Diego Chargers and Buffalo Bills, among other teams. He also served in the U.S. House of Representatives from 1971-89, and as United States Secretary of Housing and Urban Development from 1989-93 under former President George H.W. Bush. Dole and Kemp were defeated in the 1996 election by former President Bill Clinton and Vice President Al Gore. Kemp died three years later on May 2, 2009.