Vintage: Reform was key topic in city election 50 years ago 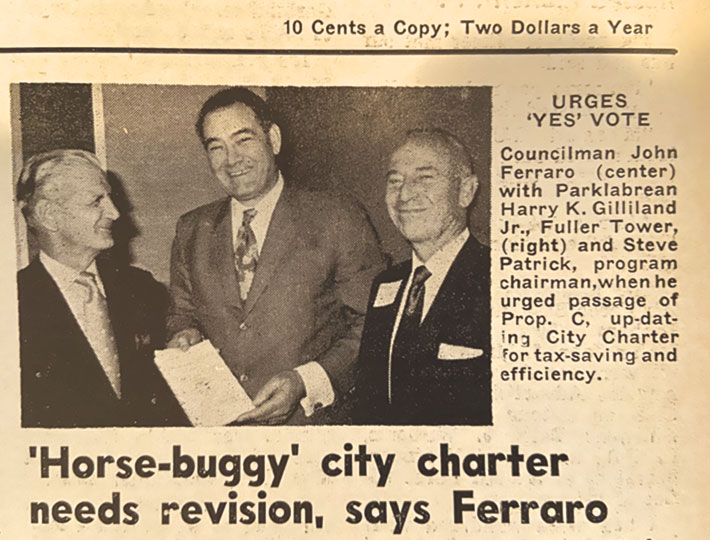 The Los Angeles municipal election was a top story 50 years ago as shown in this photograph from the Oct. 15, 1970, issue of the Park Labrea News. City Councilman John Ferraro, center, advocated for a revision of the city charter that year during a speech to the Miracle Mile Association. Ferraro, 4th District, served on the council’s Charter and Administrative Code Committee, which called for major changes to the charter, adopted in 1899 and slightly revised in 1925. The revisions, outlined in Proposition C that year, included changes to how city commissions, whose members are appointed, oversaw policies and executive direction for city departments. Ferraro backed Proposition C, which sought to shift executive power to the City Council in an effort to hold departments more accountable. Then-Mayor Sam Yorty did not support the changes, nor did voters, who defeated Proposition C in November 1970. Ferraro, who in 1977 became Los Angeles City Council President and served in the position until his death in 2001, and his colleagues continued to push for charter reform and over the following decade, rules and regulations were enacted giving elected city officials more decision-making power over department heads and other city employees – changes that remain in place today.