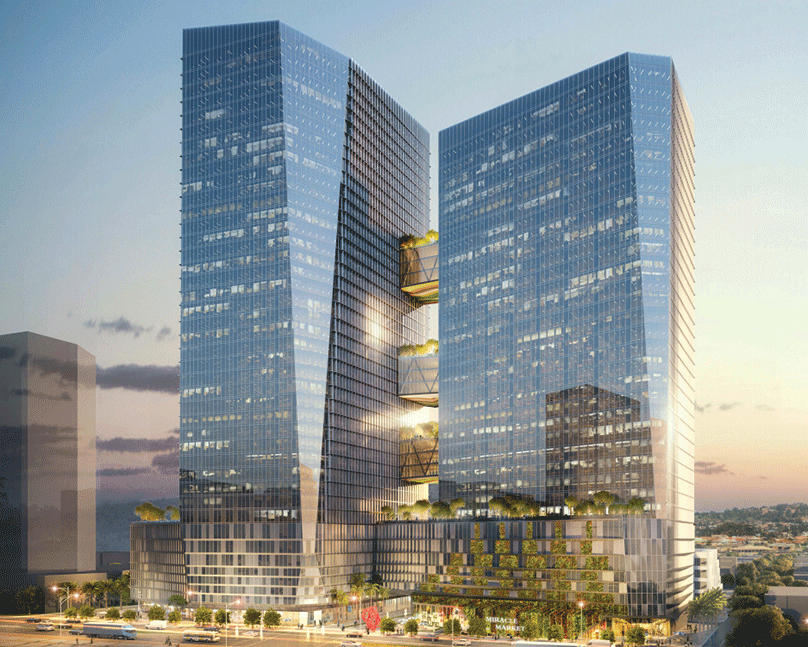 A proposed new development in the Miracle Mile would dramatically change the skyline near Hancock Park, the La Brea Tar Pits and the Los Angeles County Museum of Art.

Neither the applicant, Rossano De Cotiis, nor the project’s representative, Matt Dzurec of Armbruster, Goldsmith & Delvac LLP, returned multiple interview requests, but according to the application, the Wilshire Courtyard Redevelopment project will “renovate the southern portion of the existing office buildings, demolish the north portion of the buildings” and build approximately 1.8 million square feet of “new office space and 117,600 square feet of ground-floor commercial space with towers ranging from 35 to 41 stories,” providing a total area of more than 2.3 million square feet of floor area when the existing structures are included. The new structure would be five blocks away from the planned 42-story, mixed-use project the Mirabel at 5411 Wilshire Blvd.

The current six-story complex, which is approximately 1 million square feet in size and is used for office and restaurant space, as well as the fitness club Equinox, would add grocery and retail uses, the application said.

The current Wilshire Courtyard, which was built in the 1980s, also includes a small park on the south side of the property along West Eighth Street. It is not yet clear what will happen to the existing park, called Wilshire Green Park, though renderings and plans submitted to the city show some empty space along West Eighth Street that could be designated for the existing park, which currently includes a playground, walking paths, green space and a pond. 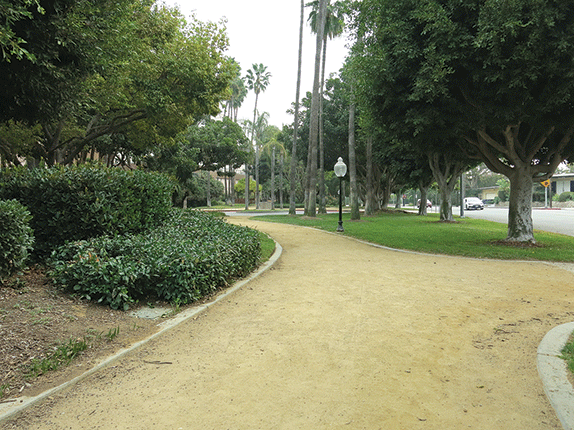 The inclusion of Wilshire Green Park was key to the Wilshire Courtyard earning the neighborhood’s support. (photo by Cameron Kiszla)

The existing Wilshire Courtyard is a project that symbolizes much more than office space in the Miracle Mile, several local leaders said.

“That parcel was a parking lot, an empty parking lot, and had some apartment buildings,” she said. “It was dilapidated and abandoned, and couches were on the street, and there were all kinds of signs, going out of business, that sort of thing. Threw were some broken windows on Wilshire Boulevard, it looked like nowhere you wanted to go.”

“I think the Courtyard had very positive effects on the neighborhood. It was a major new investment in the neighborhood at the time, and it was symbolic of the renaissance of the Miracle Mile,” added Steve Kramer, president of the Greater Miracle Mile Chamber of Commerce.

Cohen added that the project’s importance was accented by the man behind it: developer Jerome H. “Jerry” Snyder, who died in May at the age of 90. Snyder built many of the prominent buildings in the Miracle Mile, including the SAG-AFTRA Plaza, which is located across Wilshire Boulevard from the Wilshire Courtyard and now houses the eponymous company he founded.

“[The Wilshire Courtyard] was built by and envisioned by Jerry Snyder, who was the vice president of the Miracle Mile Civic Coalition since its beginning. He was very proud of that building, and his offices overlooked that building,” Cohen said. “He was a master of how you navigate a development in a neighborhood. He is really considered the godfather of Miracle Mile revitalization.”

Cohen said she met Snyder when he was working to get the Wilshire Courtyard approved, and Snyder agreed to work with the neighborhood in designing the office park, which led to the buildings’ relatively low height and the park along West Eighth Street.

In contrast, Cohen said she has not heard from Onni Group at all about their plans for the Wilshire Courtyard. Neither has Jim O’Sullivan, president of the Miracle Mile Residents Association, who pointed out that with a project of this size, the developers will be required to do an environmental impact report, which necessitates public outreach. The developers did not list any neighborhood contacts on the application, which gives the option to include nearby or adjoining property owners who support the project.

O’Sullivan added that the MMRA’s first major project was the Wilshire Courtyard, “so this is something that is near and dear to everyone’s heart.”

O’Sullivan added that, in a post-coronavirus world, people are likely to be working from home more often, making large office spaces less necessary.

“Post-COVID, I don’t know how much commercial space is necessary anymore,” he said. “I have a lot of friends in business and they say that 50% of their workforce is going to continue to be off-campus because it works. People have been working successfully, so they’re not going to go back. I thought we were pretty maxed out on commercial space before COVID.”

O’Sullivan noted that it’s early in the process, and he is still reviewing the application filed with the city, but based on the preliminary plans, the approval process could take two years “at least … if not longer.”

“If they go through with the drawings that they show, this will be a huge fight,” he said. “They are asking for entitlements that will dwarf this area, and people will fight it tooth and nail. There will be multiple lawsuits.”

The project is in the 4th District, represented by City Councilman David Ryu, and Ryu spokesman Estevan Montemayor pointed out in an email that “this project is in early stages and has not been presented to our office for formal review.”

“However, Councilmember Ryu generally looks unfavorably towards projects which request zone changes, which this project does,” Montemayor said.

Cohen said that regardless of what happens, local leaders have hopes that the park will endure and avoid being impacted by the project. Kramer called Wilshire Green Park “an integral part” of the Wilshire Courtyard, and Cohen said the park serves as a symbol of cooperation.

Cohen pointed out that at the center of the park is a sculpture of a young girl with flowers, and two plaques denote the contributions of Snyder, Cohen, O’Sullivan, former City Councilman John Ferraro and others who worked together to, as the statue’s dedication says, “Preserve today for tomorrow.”

“‘Preserve today for tomorrow’ means just that,” she said. “This is simple and beautiful and straightforward and deserves to be kept intact.”