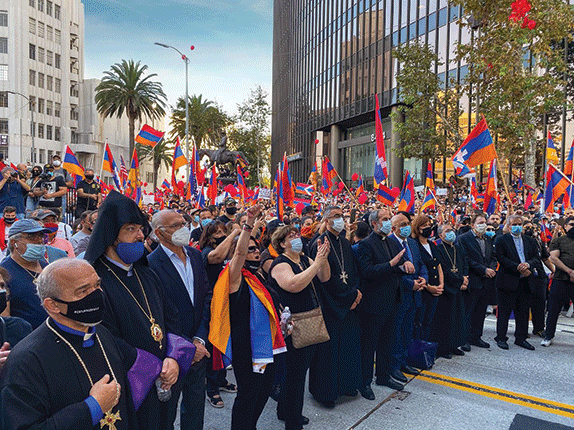 (photo courtesy of the Armenian Assembly of America)

Angelenos filled the streets as they marched in support of Armenia in its conflict with Azerbaijan over the disputed territory of Artsakh, also known as Nagorno-Karabakh. The March for Victory was organized by the Pan-Armenian Council of the Western USA, and on Twitter, the LAPD’s Wilshire Division estimated the crowd size to be 100,000 people.

The protest traveled from Pan Pacific Park to the Turkish Consulate in Beverly Hills, and many in attendance criticized Turkey for its support of Azerbaijan, as well as the Armenian Genocide, which led to the deaths of approximately 1.5 million Armenians between 1915 and 1923.

Many local leaders and their challengers in the Nov. 3 elections participated or spoke out in favor of the protesters, including U.S. Rep. Adam Schiff (D-Burbank) and his Republican challenger, Eric Early, and Los Angeles City Councilman David Ryu, 4th District, and challenger Nithya Raman. Los Angeles City Attorney Mike Feuer and other L.A. leaders also spoke in favor of the Armenian cause earlier this month.