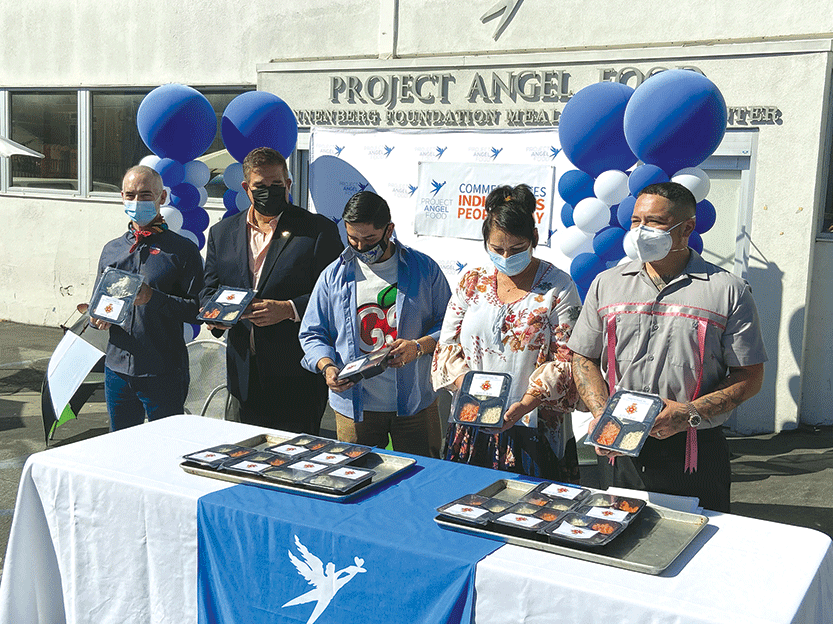 Native American leaders and medical experts gathered at Project Angel Food on Oct. 12 to celebrate Indigenous Peoples’ Day and announce the launch of an innovative study and meal delivery program to reduce diabetes among the native population.

Los Angeles City Councilman Mitch O’Farrell, 13th District, honored Project Angel Food board member and philanthropist Runningbear Ramirez with a proclamation and discussed the importance of the new study, which will track the health of approximately 150 people of Native American descent who suffer from diabetes. Project Angel Food delivers nutritious meals to people throughout Los Angeles County with HIV/AIDS, cancer and other life-threatening medical conditions, and it will deliver meals specifically tailored to reduce diabetes to clients of the new program. The medical study, funded by Ramirez, a philanthropist, activist and member of the San Manuel Band of Mission Indians, is a groundbreaking approach that fits with Project Angel Food’s mission of helping to improve the health and wellness of clients, Executive Director Richard Ayoub said.

“Diabetes is one of the most expensive and debilitating illnesses in the U.S. And for Native American in California, it is one of the top chronic illnesses,” Ayoub said. “We know that by eating healthy food, blood sugar levels can go down and the person’s quality of life will go up. There are 165,000 indigenous people living in L.A. County, and because L.A. is spread out, many of these [individuals] are culturally and socially isolated. The two-year study will enroll 150 clients and include an intensive nutrition intervention. Our goal, as it has always been since we opened our doors in 1989, is to care for the most vulnerable. This study will prove once and for all that food is indeed medicine.”

Ramirez added it is important to provide special care for members of the Native American population who otherwise may not have access to nutritious food and other resources. Meals delivered to clients of the program will bear his name, and the group labeled some of the first meals that were delivered on Monday.

“I am very thankful for the partnership with the USC Keck School of Medicine and Project Angel Food for helping get this off the ground,” Ramirez said. “I’m so proud to be part of Project Angel Food and so happy that the organization is recognizing Indigenous Peoples’ Day. Representation matters.”

O’Farrell, a member of the Wyandotte Nation and the first Native American to serve on the Los Angeles City Council, spearheaded the effort to change the city’s official observance of Columbus Day to Indigenous Peoples’ Day, which was first observed in 2018 in the city of Los Angeles.

“Richard Ayoub and the entire team at Project Angel Food have redefined what it means to give and contribute to society. And that is the spirit of [Indigenous Peoples’ Day] as well,” O’Farrell said. “Diabetes is one of the very top ailments that affects Native Americans. The introduction of refined sugar was brand new to the first peoples when colonization began centuries ago. So that has been with Native Americans, among so many other issues, [that] still challenge Native Americans today. I am so pleased to support this wonderful initiative.” 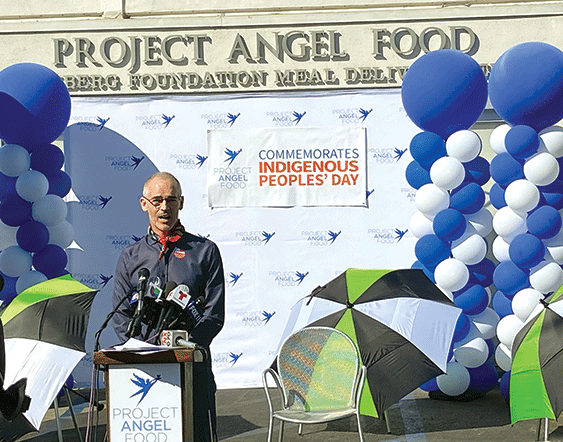 Los Angeles City Councilman Mitch O’Farrell, a member of the Wyandotte Nation, is the first Native American to serve on the council. (photo by Edwin Folven)

O’Farrell also announced on Indigenous Peoples’ Day that he is introducing a motion to better address homelessness among Native Americans in Los Angeles. He wants to ensure Native Americans are counted in the annual homeless survey and that funding and resources are available for housing. O’Farrell’s motion will ask the city’s administrative officer and chief legislative analyst to identify funding to hire a consultant who will work with the Los Angeles City/County Native American Indian Commission to develop recommendations to improve outreach, access, services, housing and shelter for Native Americans. The council is expected to consider the motion in the coming weeks.

“The city and county have taken major steps to address the long-standing issue of homelessness in Los Angeles, however the Native American community is being left behind when it comes to housing and supportive services,” O’Farrell added. “This policy initiative will address the even longer-standing needs of the Native American community, and I’m calling on our partners at the county and state level to join me to address the great needs of this community.”

Ayoub added the Project Angel Food remains to committed ensuring clients are served, particularly during the pandemic. He said an important component of the meal delivery services is combating social isolation some people may feel in their homes. Since March, Project Angel Food’s service demand has increased by 29% – from 1,500 people served a day to 2,100 daily.

“When our 2,100 clients see this meal, they know they are coming from someone who cares,” said Ayoub, explaining the importance of labeling the meals with the name of a benefactor like Ramirez. “I couldn’t think of a better way to celebrate this day than to announce a research study that helps Native Americans with diabetes have a healthier life through our ‘food as medicine’ program.”

Streetlights program offers a ‘foot in the door’