Plans filed for another Hollywood hotel 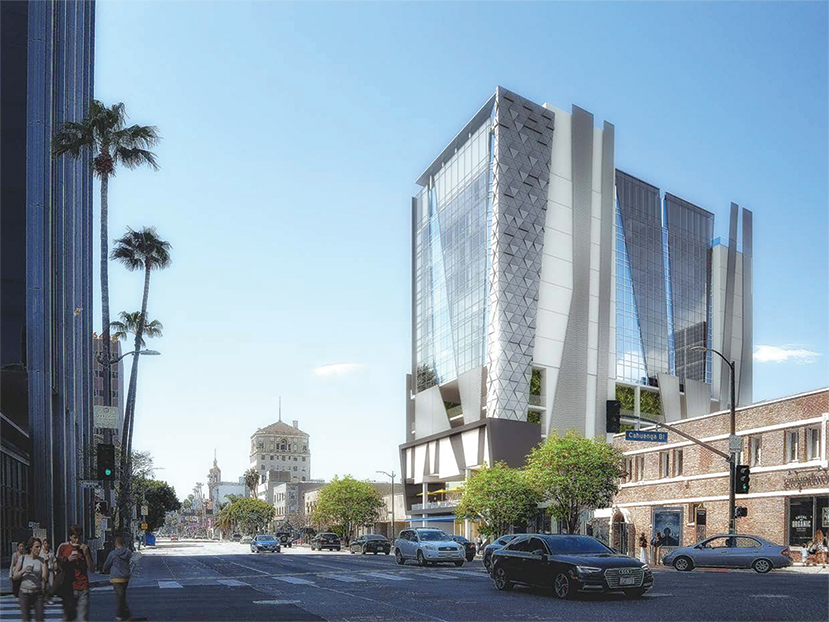 A 13-story hotel may join several other taller buildings near the intersection of Sunset and Cahuenga boulevards. (rendering by Archeon/courtesy of L.A. City Planning)

Plans were filed with the city of Los Angeles last month for a 13-story, 173-foot-tall hotel at 6445 Sunset Blvd., feet from the northwest corner of Sunset and Cahuenga boulevards. If approved by the city, the project would mean structures of at least 10 stories would be planned on or near all four corners of Sunset and Cahuenga.

Representatives for the developers, 6445 Sunset LLC and NELA Sunset LLC, did not return requests for comment, but the project application indicates that the 175-room hotel would also include restaurant, bar and lounge space in its nearly 60,000 square feet.

“Located within the dense, walkable Hollywood community, the property is uniquely situated in the geographic center of Hollywood’s urban core to maximize tourism and entertainment opportunities,” the development team said in the application.

The location for this new hotel – just a few doors down from the northwest corner – is north of Sunset Boulevard, across the street from the site of a planned 14-story office building. On the eastern side of Cahuenga Boulevard, plans have been announced for a 21-story hotel to replace a Jack in the Box fast-food restaurant, and a 26-story mixed-use building on the former home of Amoeba Music.

Kristopher Larson, president and CEO of the Hollywood Partnership, the nonprofit organization which manages the Hollywood Entertainment District property business improvement district, said aside from the CNN Building – the only corner of Sunset and Cahuenga not affected – that intersection is “underdeveloped relative to what they could be, from a best- and highest-use perspective,” especially considering that intersection is “simply the center of Hollywood.”

“I think in Hollywood, there is a tolerance for density in the right places,” Larson said. “I think that’s the real trick. Not all of Hollywood is a historic district. As a community, we need places to grow and places for jobs to be located. It’s just smart planning to co-locate density of all forms near the transportation infrastructure and close to your job centers. The major driver here, I believe, is employment and the emergence of Hollywood as a neighborhood in Los Angeles, rather than simply a tourist destination.” 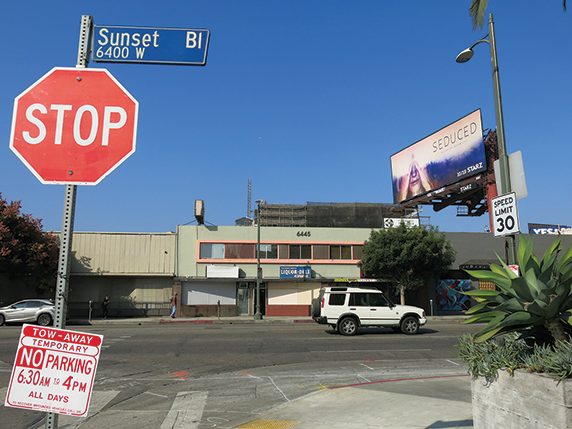 The two-story structure at 6445 Sunset Blvd. may be torn down to make way for a 13-story hotel. (photo by Cameron Kiszla)

Larson added that this project is exciting for the Hollywood community.

“We are always encouraged to see when parties are interested in investing in Hollywood,” he said. “The latest announcement comes at a welcome time where good news is really cherished, particularly given the impact of the pandemic on the hotels and tourism sector.”

The new project is one of 17 hotels in Hollywood that are under construction, approved or seeking entitlements from the city.

“We’ve got 1,796 hotel rooms that are currently under construction or entitled, and an additional 941 rooms across seven properties seeking entitlements,” he said.

These new rooms will join the 2,200 rooms that exist in the boundaries of the Hollywood BID – which includes the Hollywood Walk of Fame, portions of major streets like Highland Avenue, Vine Street, Cahuenga Boulevard and areas as far south as Santa Monica Boulevard – and approximately 4,200 hotel rooms in Hollywood as a whole.

Larson said the growth in hotels is driven by the growth of jobs in Hollywood and the neighborhood’s location in Los Angeles.

“When you look at the hotels that are in the pipeline, you see a migration southward, which aligns perfectly with the new office projects that are either under construction or proposed for Hollywood,” he said. “It’s really that center of gravity shifting southward along the Sunset corridor. Five out of the six planned office projects inside my BID boundary are planned for south of Sunset boulevard … [And] Hollywood remains centrally located within Los Angeles, with very easy access and rail connections to downtown, the westside and very soon, Beverly Hills. It’s a great central location for anyone visiting L.A.”

Tony Arranaga, spokesman for Los Angeles City Councilman Mitch O’Farrell, 13th District, said O’Farrell “is waiting for the City Planning department to complete its evaluation of the proposed project before deciding on whether or not to provide support.”