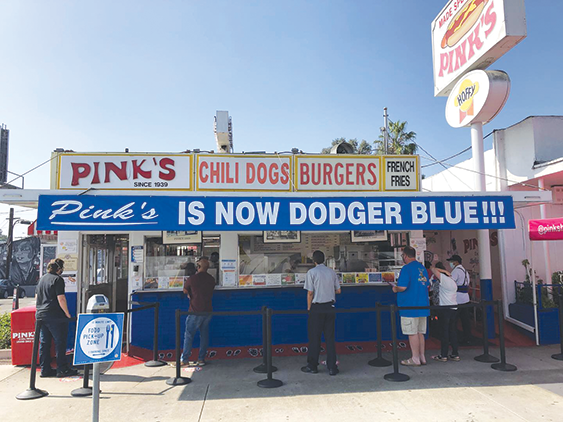 Fans can get a Blues Bacon Chili Cheese Dog for $4.88, with proceeds benefiting the Los Angeles Dodgers Foundation. (photo courtesy of Richard Pink)

The Los Angeles Dodgers are back in the World Series and the celebration is back at Pink’s Hot Dogs.

The stand near Melrose and La Brea avenues is decorated wall-to-wall in Dodger blue, and fans can enjoy a Blues Bacon Chili Cheese Dog for $4.88 for the duration of the World Series. All proceeds from sales of the celebratory hot dog will be donated to the Los Angeles Dodgers Foundation. Owner Richard Pink said the special price – particularly the 88 cents – pays tribute to 1988, the last time the Dodgers won the World Series.

“This is the same dog we sold for each of the last World Series appearances, and it has become a tradition,” said Pink, who operates the stand with his wife, Gloria, and sister, Beverly Pink-Wolfe. “When we were born, we came out with Dodger-blue blood. At Pink’s, we bleed Dodger blue. Even though they are playing in Texas, we are celebrating them here in Los Angeles at Pink’s. We are showing our love and appreciation for the team.”

Pink said the stand is the perfect place to enjoy hot dogs and hamburgers before and after the games, and to pick up food for home-viewing parties. The Blues Bacon Chili Cheese Dog is a 12-inch stretch dog with mustard, onions, chili, cheese and bacon. The stand also offers dozens of other varieties to satisfy everyone’s appetite.

Pink said he is confident the Dodgers will win the World Series and he will be closely following every game. As for a favorite player, Pink said he is partial to Justin Turner, who served hot dogs there in 2019 during “Chili Dogs for Charity” in celebration of the stand’s 80th anniversary.

“They have a fabulous lineup this year and we are very proud of them,” Pink said. “I cannot see them doing anything but winning the World Series.”