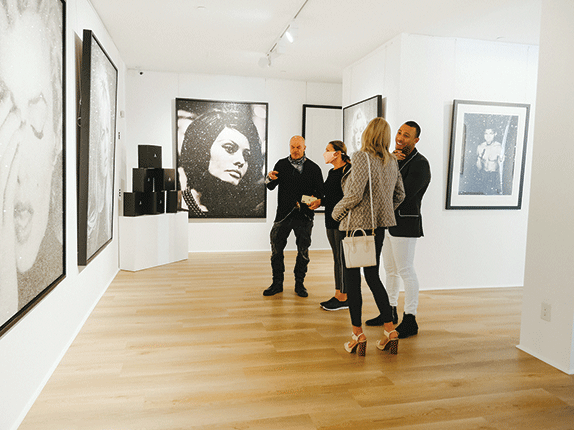 The coronavirus pandemic may have shut down many in-person gatherings over the last six months, but last week, a glimmer of normalcy returned to a West Hollywood art gallery.

The Art Angels gallery at 9020 Beverly Blvd. hosted artist Russell Young’s “Heroes & Heroines” show on Sept. 24, and collectors and friends entered the gallery and walked the show with the artist.

The in-person gathering hosted about 70 people overall, said Jacquelin Napal, one of the owners of Art Angels, but the attendees were split into groups of 10 or fewer people that attended the show in shifts, in accordance with Los Angeles County health guidelines.

Before entering, everyone was tested for COVID-19 using QuestCap’s rapid antibody test, which indicates the presence of antibodies that show one’s body is currently fighting COVID-19, not the more commonly known antibodies that indicate the body’s battle against the coronavirus is complete.

Tim Shelburn, U.S. operations manager for Collection Sites, a subsidiary of QuestCap, said the tests use blood from a finger prick, and they return preliminary results in less than 10 minutes. Full, certified laboratory results are emailed to those tested later that day.

Shelburn said for Young’s show, QuestCap offered the tests – which normally cost $59 each – at no charge as a way to show that holding in-person events is possible during the pandemic as long as safety procedures are followed. In this case, that involved several health-related rules, such as 30-minute shifts of attendees, followed by a 15-minute sanitization period between each group.

Other QuestCap clients include the NBA and film studios who are returning to production, he said.

“We’re just trying to show the community that you can promote safe events if you follow the proper protocols. We want to be part of the solution to be able to bring things back to normal,” Shelburn said.

Napal said during the pandemic, Art Angels hasn’t had to close, but they’ve often had to use technology, including social media, to show art to potential buyers. Last week, the collectors were thrilled to see the art – and other people – in person again, she said.

“Everyone was a little bit nervous, but excited at the same time,” Napal said. “It ran fairly smoothly. Everyone who came was aware of what they were walking into, but it was nice to see that relief wash over their face as they were told they were negative and could walk the show with the artist. You could just see the calm come over them to be out and see art again in the company of the artist.”

Young, who hails from Northern England but now lives between Ventura and Santa Barbara, said the art in the “Heroes & Heroines” show is especially suited for in-person viewing. Young, who said he likes to “play with fame and shame,” procures photographs of celebrities, paints the background and sprinkles diamond dust “as a sort of three-dimensional, tactile layer or veil.”

“In a sense, it makes them more iconic, more unobtainable. I like the sculptural aspect to them, and when you move around the room, the diamond dust sparkles and reflects,” Young said. 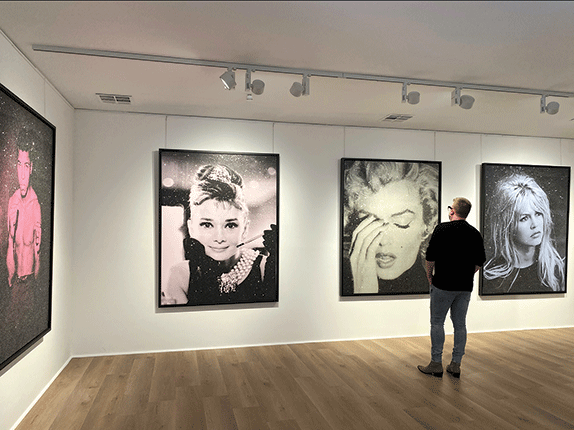 Young also enjoyed interacting with others in a safe environment, which allowed for physical contact and conversation with the guests, including the actor Sean Hayes of “Will & Grace” and his husband, Scott Icenogle.

“It was spectacular. It was wonderful. On a human level, it was really interesting to see people’s reactions after 10 minutes. They know they’re in a room where everyone in the last hour has tested negative for COVID. It takes a while for people to sink in and interact with each other,” Young said.

Once that realization sunk in, however, the attendees were all too eager to enjoy face-to-face conversation with strangers once again.

The success of Young’s show offers hope for a variety of people, businesses and events that have been struggling during the pandemic. Young said there is now a template for other artists – especially those who are struggling – a way to exhibit their art and connect with potential buyers. Napal agreed and said the tests could be used to safely bring back art fairs, such as Frieze Los Angeles and Art Basel.

“More than anything, so many galleries rely on [art fairs], and it would feel far more comfortable for collectors to come to these fairs and know they are being tested instead of taking a chance and hoping people will attend,” Napal said. “People will be hesitant, so whatever added security you can give them … whatever additional benefits you can get to attend these things, I think collectors will start to be more open to it.”

Shelburn said QuestCap is hoping to ultimately help the return of events featuring crowds of thousands.

“I think we found that everyone is very willing to do testing to enter an event like [Young’s show],” he said. “We’re hoping that one baby step at a time, we can bring back arena sports and all types of gatherings. It’s a process, but it can be done and done successfully.”

QuestCap is also launching its testing services across the country using hundreds of 10-foot by 10-foot cubes, which can be installed at gas stations, grocery stores and malls, allowing people to quickly know their COVID-19 status and, in the end, helping Americans get better control of the virus.

“While you’re pumping gas you can do … a test and receive your results the same day … People are trying to be responsible, but unless you’re a major corporation or a sports team, you just don’t know where to test or you’re waiting in line for hours and hours … We saw there was a big problem there and we’re trying to find a way to solve it,” he said.

On a personal level, Young said his show allowed him to peek into how in-person events will have to be held, at least for the coming months and years.

“Whenever we get back to normal, it’s obviously going to be phased. It sort of gave me a little glimpse into the future on how the world starts to roll out again, because everybody’s not going to get a vaccine for it on day one, nor will everyone want to do that. It’s quite strange days to live in,” Young said.

WeHo council speaks out against sheriff