More films like this please. BBC’s “Sherlock” modernized the world’s greatest deductive mind, while CBS’s “Elementary” explored addiction. Then there’s Robert Downey Jr.’s rebrand as an action hero. Letting a new character rise turns out to be the best way forward in “Enola Holmes,” the most charming film of the year.

For Sherlock purists, “Enola” might insight anxiety, with the addition of original characters like Holmes’ younger sister Enola (Millie Bobby Brown) and mother Eudoria Holmes (Helena Bonham Carter). Past Sherlock stories either omit mother or mention her only briefly. But at least this Netflix film, based on the young adult series by Nancy Springer, provides a valid rationale for their absence while Sherlock (Henry Cavill) and uptight older brother Mycroft (Sam Claflin) elevate the family name in London.

They enjoy an array of literary adventures and even some combat training in the family home in the countryside, removed from high society, especially all those unsavory bits that would require both to submit to patriarchal norms. Upon Enola’s 16th birthday, however, everything changes when mother vanishes, leaving Mycroft in charge.

Shocked by Enola’s improper behavior, Mycroft plans to ship his youngest sibling to a boarding school. Hopefully that will subdue her adventurous side, sand down any rough edges that might deter prospective husbands. Nope. That ain’t her jam, so Enola uses her unique intellect to escape and make her way to London in search of mom.

The book series focuses on Enola’s time as a private investigator oft in search of missing persons. That’s where things begin – missing person No. 1, mom – but the search must take a beak seat to the intrigue surrounding Viscount Tewkesbury (Louis Partridge), on the run as well, resisting family expectations.

Viscount may not face the same prejudices as Enola – male privilege is on his side, after all – but that doesn’t make the mysterious man trying to kill him any less pressing. Enola feels obliged to focus on finding her mother, but seeing someone else in trouble sparks an internal conflict, one that peppers this film and any potential sequels to come.

Sure, the film’s branding targets the Sofia Coppola lover – perhaps rightly so – but the actual film is a splendid cocktail with complimentary ingredients: one part comedy, two parts mystery, a dash of thrill, a mist of romance. No lag, no corny bits, no weak performances. It all works in all works, serving as a primary example of re-watchable entertainment. Thank Millie Bobby Brown for that.

Brown broke out as the heroine of Netflix’s “Stranger Things,” constantly saving her Scooby gang from the Upside Down. As Enola, she navigates the changing post-Victorian England alone, while parliament prepares to decide the fate of women’s rights. Regardless of what the English elite want for the future of their country, Enola’s voice is already quite pronounced; her mother saw to it.

“Enola” establishes this in the opening moments when the young Ms. Holmes stares directly into the camera and narrates. Usually a bad screenwriter fancies a voiceover that says what should’ve been shown. Perhaps some of that occurs, but every fourth-wall break texturizes Brown’s performance, showing off Enola’s personality, to winning effect. Brown’s a remarkable talent, and first-time film director Harry Bradbeer (“Fleabag”) helps her shine, with the help of Jack Thorne’s (“His Dark Materials”) stellar writing. 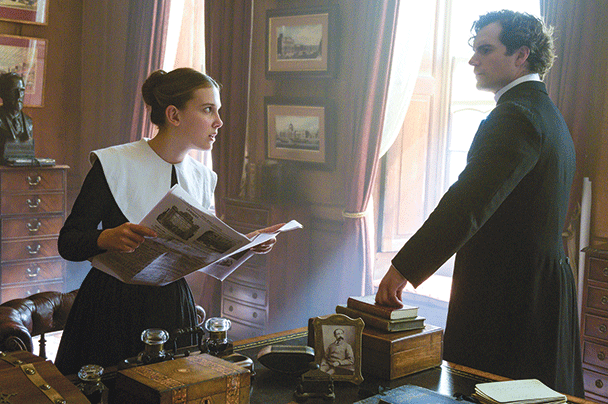 Again, Sherlock lovers be warned: Cavill’s Sherlock enjoys a degree of screen time, but serves a supporting role at most. Perhaps that will change in future installments – though it doesn’t need to – but for now, he’s the big brother, for better or worse, trying to play catchup to his sister.

But at least he’s not Mycroft. Unlike other portrayals of the stuffy older brother, “Enola” presents the most foul thus far.

Others shine as well, including Partridge, as Viscount, and Carter, as Eudoria. But this is all Brown’s show. She soars and will continue to do so in future projects, hopefully as Enola once more.