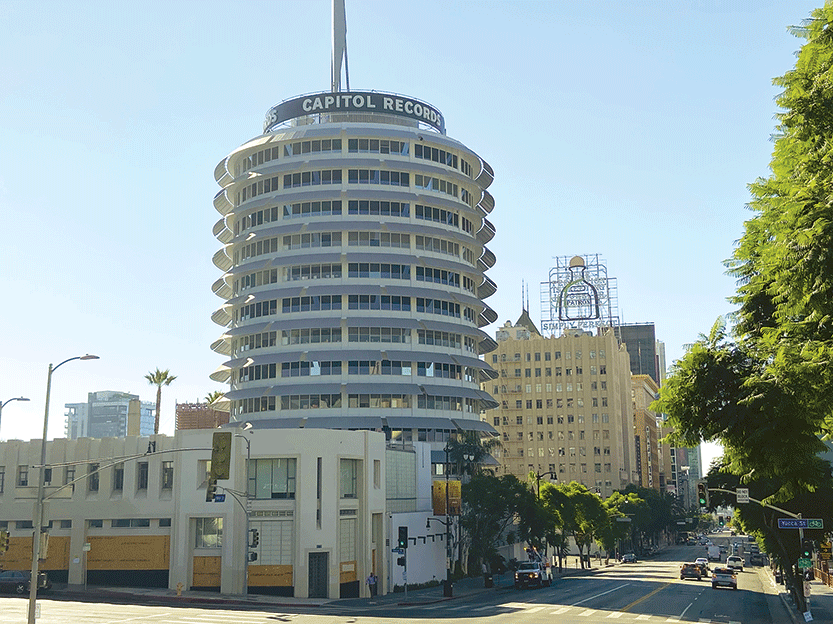 The Hollywood Center Project is proposed on parking lots around the Capitol Records Building. (photo by Edwin Folven)

A Los Angeles Planning Commission hearing for the Hollywood Center Project scheduled for today, Oct. 15, will likely be continued after Los Angeles City Councilman Mitch O’Farrell, 13th District, submitted a letter on Oct. 12 requesting that further consideration be given to seismic studies, and the project’s developer concurred.

“Additional seismic review should occur before this project advances any further in the entitlement process,” read O’Farrell’s letter to the Planning Commission.

The project remains on the Planning Commission’s agenda, but it is expected that the continuation will be granted. O’Farrell has requested that consideration be continued to an undetermined date.

The Hollywood Center Project is a proposed 4.5-acre, mixed-use development that would be built just north of Hollywood Boulevard on both sides of Vine Street. It would be located on parking lots surrounding the Capitol Records Building, which will be preserved. The project has been making its way through the planning process, and the final environmental impact report was released in early September. The Planning Commission hearing is a final step before the project goes before a City Council committee and then to the full City Council.

O’Farrell said previously he was concerned about potential seismic activity at the site, as outlined by studies. The project’s developer MP Los Angeles said it is committed to further review.

“At the behest of the city, we have agreed to delay the city Planning Commission hearing on the project. Doing so will afford the city sufficient time to ensure that our plans for Hollywood Center are consistent with the highest standards of seismic safety,” said Mario Palumbo, of MP Los Angeles, in a statement. “We remain steadfast in our goal to bring forth a resilient and safe project that responds to the input and needs of community members and unwavering in our vision to shape and deliver a program that responds to Hollywood’s most pressing needs.”

MP Los Angeles is the same developer that previously received permission from the city to build the Millennium Hollywood project, which was later scrapped after a court ruling in 2015 in favor of opponents who contended that not enough study was conducted on its impacts to the surrounding community. Attorney Robert P. Silverstein, who represented many community groups that came together under stopthemillenniumhollywood.com, filed the previous lawsuit that blocked the Millennium Hollywood project. He is leading opposition to the Hollywood Center project, and said new seismic studies show the project could be dangerous. He has cited studies and analysis by the U.S. Geological Survey and the California Geological Survey indicating fault lines may run beneath the property where the project is to be built.

“We have argued that the Hollywood Center skyscraper project would sit on the Hollywood Earthquake fault and that it would be tragic to jeopardize the lives of thousands of occupants by allowing this project to be built,” Silverstein said. “For the new seismic testing to have any credibility, it must be done as part of an open environmental review process, and it must be overseen by a committee of neutral, independent experts. The trenches have to go deep enough and far enough, on both sides of the property. If the city and developer run it, that will be an invitation for more fraud. It would be like the fox guarding the hen house.”

It has not been stipulated what further seismic studies or review will be required and when they will take place. Information about the Hollywood Center project is available by visiting planning.lacity.org/development-services/eir/hollywood-center-project-1.