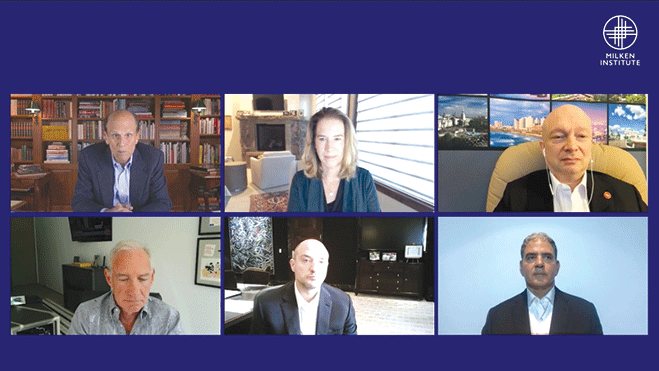 For the first time in its 23-year history, the Milken Institute Global Conference went entirely virtual, a response to the COVID-19 pandemic.

In opening the eight-day conference, which began on Monday, Oct. 12, Milken Institute CEO Michael Klowden underscored that it was a year “unlike any other” given the pandemic, its correlated economic fallout and the quest for social justice, all of which have engendered “a world of high volatility and uncertainty.”

Unlike in previous years, anyone with access to a computer or smart device can watch the panel discussions free of charge as they are live streamed through Oct. 21 on globalconference.org. Following that, an archive of over 100 panel discussions which primarily address the dual crises of a global pandemic and social injustice will be available on the institute’s website.

In previous years, Beverly Hills has been the epicenter for the conference, which has historically taken place at the Beverly Hilton for the bulk of its run.  Laura Biery, economic sustainability manager for the city of Beverly Hills, said there isn’t another large-scale conference of that size in the city.

“This is the biggest thing we do all year,” Beverly Hills Conference and Visitors Bureau CEO Julie Wagner said, noting that attendees annually spend several million dollars at Beverly Hills restaurants, hotels and retailers. “[The pandemic] is having a monumental effect on the travel industry. Period.”

According to Shant Apelian, director of global communications for the L.A. Tourism and Convention Board, the number of overall visitors to L.A. is forecast to decline by 20 million this year, down by 39% over last year’s 51 million visitors. As a result of those declines, visitors are forecast to spend $10.3 billion less than what they spent last year in the L.A. economy, down 42% from last year’s $24.6 billion. The board further forecasted that almost 173,000 leisure and hospitality jobs will be lost this year – around 32%.

“While conventions are not currently permitted under state guidelines, we continue to work closely with public health on appropriate safety protocols for meetings so that we’re fully prepared once the state and county approve reopening this important sector. We are partnering directly with our customers to assist in looking at alternative dates in 2021 and beyond as necessary,” Apelian said.

Beverly Hills Mayor Lester Friedman said he was particularly enthusiastic about large events returning to the city when it is safe.

“The pandemic continues to impact events in our city, region and around the world. We look forward to the Milken conference returning to Beverly Hills when it is safe to do so. It will be a world-class welcome back,” he said.

In previous years, approximately 3,500 people have come to Beverly Hills for the three-day conference to network, make deals and participate in scores of panel discussions.

“The conference is one of the most invaluable programs that our city has the privilege to host,” Peninsula Beverly Hills Managing Director Offer Nissenbaum said. “We not only appreciate that it draws such a large number of travelers and visitors from around the world, and the high caliber clientele that loyally patronize the Peninsula Hotel, but it’s a boon to our local economy. Beyond the conference itself, the ancillary meetings, networking, entertainment and shopping greatly benefit our hotels restaurants, retail and other services.”

Since its inception by billionaire banker-turned-philanthropist Michael Milken, who earlier this year was pardoned by the president for insider trading in the 1980s, the global conference has increasingly tasked attendees with creating new and innovative solutions for the world’s issues.

Over the course of this year’s conference, the theme of “Meeting the Moment” has been front and center.

At the Oct. 13 panel “Corporate Leadership: Transforming Disruption into Opportunity,” Milken probed five industry leaders to reflect on the events reshaping the world while highlighting the need for intersectional thinking and leadership.

“[A] challenge for us, as for all companies, is really the transition to working from home,” Ancestry CEO Margo Georgiadis said. “For us, so much about what makes us a powerful company is how people get together and engage in that collaboration process. How do you recreate that from home and maintain that same level of energy? And for us, it’s been finding all sorts of ways to recreate that ‘water cooler’ that I think we all benefit from.”

“I think people are really looking for a sense of meaning and inspiration,” she added. “We really see this as a fundamental shift on consumer priorities.”

The institute estimated that more than 4,000 people representing more than 70 countries will participate in this year’s conference. As in years past, speakers include Fortune 500 CEOs, government officials, Nobel laureates, Oscar winners and Olympians.

While the general public has free access to the conference, participants wanting more formal networking connections will be charged in the thousands.