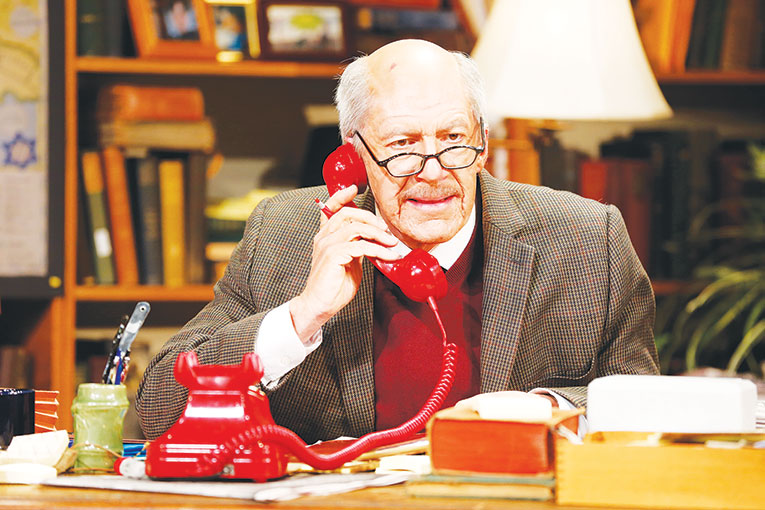 Tom Dugan stars in “Wiesenthal.” (photo courtesy of the Wallis)

The Wallis Annenberg Center for the Performing Arts is slated to present a digital engagement of “Wiesenthal,” based on the life of famed Nazi hunter Simon Wiesenthal. The critically acclaimed off-Broadway production written by and starring Tom Dugan will be available digitally from Oct. 20-27.

Directed for the stage by Jenny Sullivan, the riveting one-man show, filled with hope, humanity and humor, tells the true story of Wiesenthal, often called the “Jewish James Bond,” a Holocaust survivor who devoted his life to bringing more than 1,100 Nazi war criminals to justice after World War II. Los Angeles’ Simon Wiesenthal Center is named in his honor.

The digital presentation is a live performance that was recorded during the run of the show’s New York premiere at the Acorn Theatre in 2014. The Wallis previously presented the live production of Wiesenthal in 2015.

“My father was a WWII veteran who was awarded the Bronze Battle Star and the Purple Heart. He helped liberate the Buchenwald Concentration Camp in 1945,” Dugan said. “Wiesenthal was not only a Jewish hero, he fought for the rights of all Holocaust victims, including Soviet, Polish, Gypsy and homosexual victims as well.”

During World War II, Wiesenthal was imprisoned in five different Nazi concentration camps and by 1942, 89 members of his and his wife’s relatives had perished from being sent to these death camps. After the war, Wiesenthal dedicated his life to Holocaust memory and education and founded the Jewish Documentation Center in Vienna. He worked tirelessly to investigate and locate Nazi criminals for prosecution, including Adolph Eichmann and Franz Stangl, earning him the nickname “Nazi Hunter.” He died at the age of 96.

Tickets are currently on sale for $50 per household. For information, visit thewallis.org/wiesenthal.