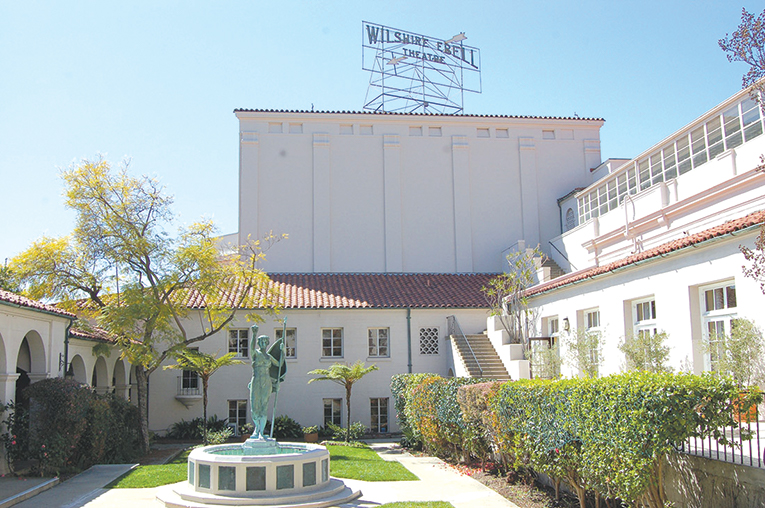 The Ebell hosted the forum on measures included on the Nov. 3 ballot. (photo by Edwin Folven)

To better inform voters about the myriad propositions on the Nov. 3 ballot, Mona Field, co-president of the Los Angeles League of Women Voters, held a virtual forum in partnership with the Ebell of Los Angeles on Oct. 8 covering the 12 propositions and one county measure.

The forum, which was held on the centennial year of the 19th Amendment, which gave women the right to vote, marked the fourth year that Field, the author of “California Government and Politics Today,” held a propositions forum for members and friends of the Ebell, which was founded 126 years ago by women for women.

The $5.5 billion state bond for stem cell and other medical research dedicates $1.5 billion to finding cures for diseases including Parkinson’s, Alzheimer’s and cancer. Increased state costs to repay the bond money is estimated at about $260 million per year over the next 30 years.

Voters last supported funding a state-sponsored stem cell research institute in 2004 with Prop. 71, which established the California Institute of Regenerative Medicine. Since that time, billions of dollars have been spent through the institute, and Proposition 14 would renew funding.

“What is happening is that the same gentlemen who put that on the ballot in 2004 is now putting this on the ballot to get new tax money,” Field explained. “There is some concern that there’s not enough public oversight of the agency that runs this. And that there’s actually a fair amount of conflict of interest going on.”

Field highlighted that Robert Klein, who initiated both Prop. 71 and became chairman of the institute’s governing board when it was established, has contributed $5 million in furtherance of Prop. 14 with various individual donors contributing an additional $4.5 million. Opponents, by contrast, did not raise enough to be listed by the Fair Political Practices Commission.

“Between the dollars sent into the yes side and the very heart-wrenching appeals to our goodwill to defeat disease, you can see, there’s an edge there with the proponents,” Field said.

“This is a property tax change,” Field clarified. “Before Prop. 13, your county collected property taxes – that is still true – and the taxes were based on the current value of the property, whether it was a home, an office building, Dodger Stadium or Disneyland. And what happened when we passed Prop. 13 (in 1978) is we said, ‘nothing will be reassessed until a change of ownership.’”

“It will be the largest tax increase in the history of California, and the fear is those larger corporations, upon having a much higher property tax, might pass the costs on to consumers,” she added.

Essentially, Prop. 16 brings about the return of affirmative action when making decisions about public education and public employment, which became illegal 1996. If successful, the proposition will permit government decision-making policies to consider race, sex, color, ethnicity or national origin to address diversity by repealing the constitutional provision prohibiting such policies.

“This one is something that raises eyebrows,” Field said. “Prop. 16 would reverse Prop. 209 and once again make it possible for public agencies to consider diversity factors when we hire public employees, admit students to our public universities and when people are given contracts to provide a public service to any public agency.”

One of two propositions that have to do with voting rights, Prop. 17 would allow people on parole to vote. In addition to restoring voting rights upon completion of a prison term, the proposition allows certain people on parole the ability to run for public office. According to Voter’s Edge California, a joint project of the League of Women Voters of California Education Fund and MapLight, approximately 50,000 people in California are on parole, which on average lasts three years.

“The fiscal impact is relatively minor,” Field said. “The pro and con are quite simple. People who are concerned about restorative justice and rehabilitation believe that if you’ve done your time, the minute you’re out, you’re on parole, you have requirements, but you should be able to vote. And the ‘no’ side would say that parole is an extension of that sentence.”

Prop. 18 would allow 17-year-olds to vote in primary elections or special elections if they will be 18 by the general election in November. Currently, while 17-year-olds can pre-register to vote in California (as long as they are U.S. citizens), they can only vote if they have turned 18 by Election Day.

“This is one of civic engagement; let’s make sure our youth get involved and vote as soon as possible. And the con [side is] mostly concerned with the maturity of teenagers,” Field described.

Prop. 19 allows homeowners who are over 55, disabled or victims of wildfires or disasters to transfer their primary residence’s tax base to a replacement residence. It also changes the taxation of family property transfers and establishes a fire protection services fund.

“What Prop. 19 would do would be to allow homeowners to sell a home, relocate within California … anywhere in the state and keep that original property tax,” Field explained in detailing how homeowners over 55 can keep a lower property tax if they relocate to certain California counties. “It would certainly benefit older homeowners who choose to take advantage … and it would add needed resources to our firefighting programs.”

However, Field said it would likely increase the economic disparity between the older generation and younger people.

“Over the last decade, voters in California have supported propositions … that have reduced the definitions of certain crimes, reduced the supervision or parole levels of those released from prison, and [were] believed to be a form of criminal justice reform,” Field explained. “Prop. 20 could certainly result in more people being sent to prison or staying longer in prison. In effect, it’s a return to a more ‘tough on crime’ approach.”

Prop. 21 would allow cities and counties the option of passing rent control rules for housing that is more than 15 years old. State law currently prevents rent control on single-family homes and housing built after Feb. 1, 1995. In addition, Prop. 21 allows communities the ability to limit how much a landlord could increase rent when a new renter moves in, with landlords allowed to raise rent by up to 15% over three years on new renters, plus any increase allowed by local law. Prop 21 would only apply to landlords who own more than two housing units.

“This is what I call one of the repeats,” Field said. “It’s very similar to one that we did not support two years ago.”

Since defeating the last rent-control measure, California housing costs have continued to rise, trending to be higher than most other states. Roughly a dozen California cities (out of around 1,000 cities) currently have rent control laws that limit how much landlords can increase rents each year. Field said that about half of renters in California currently benefit from two statewide rent-control laws signed by Gov. Gavin Newsom in the previous two years.

“Current law does limit the ability of local cities to amend their current rent control,” Field said. “It doesn’t impose rent control on the whole state. It simply gives an opportunity for cities and counties to create rent control laws.”

“It’s about whether people who work, primarily those employed by the rideshare companies Lyft and Uber, will be full employees with benefits or quasi employees with some benefits,” Field said.

The ballot measure follows an unsuccessful lawsuit waged by the ride-hailing companies after the California Legislature passed Assembly Bill 5 in 2019, which stipulates that ride-hailing drivers and other types of workers should be treated as employees, instead of independent contractors. Prop. 22 would reverse the state law.

“Prop. 22 gives drivers a chance to be better treated while maintaining their independence; that’s a pro point of view,” Field said. “The no side points out that this is not adequate because all workers and drivers have to be full employees with the proper benefits. And, the no side points out that this was put on the ballot and paid for by the corporations’ for-profit motives.”

In working to pass the measure, she said Lyft has spent $50 million, Uber and Doordash have each spent $48 million, Instacart has spent $26 million and Postmates has spent $11 million.

Prop. 23 would require dialysis clinics to have a doctor present during all treatment hours and would forbid clinics from discriminating against clients based on their insurance or how they are paying for treatment. In addition, the proposition requires clinics to report any dialysis-related infections to the state every three months and requires clinics to first get permission from the state before closing or reducing services.

Field noted that a different version of a similar ballot measure was defeated by voters two years ago.

“The ‘for’ is that this protects patients, making sure a doctor is there and prevents the clinics from closing without actually going through a process with the state,” she said. “The no side is going to talk about the fact that the increased cost is unnecessary because every patient is under the supervision of their doctor … and it could increase costs.”

She highlighted how the SEIU/United Healthcare Workers West PAC has spent $5.6 million to support the proposition. Three private companies have spent a total of $93 million opposing it, the bulk representing DaVita’s $60 million contribution.

Prop. 24 attempts to give people increased power over their personal data with consumers allowed to contact companies to prevent them from sharing or using sensitive personal information including location data, health information or private communications. If successful, the proposition would also create a state agency to enforce the privacy laws and issue fines to companies that break privacy laws.

“I think it’s unfair for us voters to have to deal with the complexity of Prop. 24,” Field said. “This is beyond the expertise of most of us.”

Currently, the California Consumer Privacy Act already allows consumers to find out what data companies are collecting about them, tell a business to stop selling their personal data and have their data removed from a company’s files. Prop 24 would change some of the current California law such as allowing consumers to correct personal data, increasing the penalties for violation of privacy rights of minors and allowing businesses to offer “pay for privacy” options.

According to Voter’s Edge California, the new state agency would cost California $10 million or more each year, and enforcing privacy laws would likely cost the state in the low millions of dollars each year.

“It would require the courts, instead of cash, to assess the individual and the risk of releasing them versus the risk of letting them go home and show up for their trial,” Field said. “It’s kind of like, ‘released on your own recognizance.’ Meaning, no bail, we believe you, you’ll come back for the trial.”

County Measure J is an ordinance amendment placed on the ballot by a 4-1 vote of the :os Angeles County Board of Supervisors. The measure would require the county to allocate at least 10% of its budget from locally generated unrestricted revenue for community and social services.

“The people in favor say this tends to support services that include everything from youth job programs, healthcare, education, a lot of services that it is hoped … will keep people out of the courts and out of the jails. It’s an alternative-to-incarceration approach to our county spending,” Field said. “The opponents worry that this locks in the budget and that some day that 10% might be needed for other very urgent needs.”

For more information on the ballot measures, visit votersedge.org. To view recommendations made by the League of Women Voters, visit lwvc.org/vote/elections/ballot-recommendations.