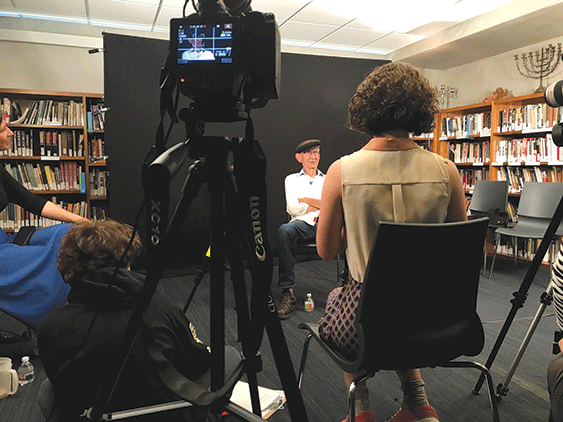 The new exhibit will include “Voices of History” Holocaust survivor films from the museum’s collection. (photo courtesy of Holocaust Museum LA)

Holocaust Museum Los Angeles presents “The Ushpizin of the Silver Screen,” an exhibit created by artist and filmmaker Tiffany Woolf running from Oct. 2, through Oct. 9.

The exhibit is a reinvention of the traditional Sukkah as an old-time Hollywood-era movie house, projecting stories on screens to commemorate this unprecedented time and to give voice to the community. The installation, located in the museum’s memorial garden in Pan Pacific Park, will include interviews and images from Reboot’s Silver Screen Studios project with three original series: “Dispatches From Quarantine,” “Coming of Age” and “The Last Act,” including the final interview with Carl Reiner and an interview with Norman Lear. It will also include “Voices of History,” Holocaust survivor films from the museum’s collection.

The exhibit is designed to transform perception of the Sukkot tradition of “Ushpizin” (inviting symbolic guests) by inviting guests to think critically about the need to gather and come together. While the sukkah will remain empty – symbolic of the separation people face daily, whether it be due to the pandemic, distance or social injustice – it will present and invite diverse stories throughout the year in a digital space.

“The Ushpizin of the Silver Screen” is a collaboration of Reboot and the Holocaust Museum LA, made possible with the support of CANVAS. The work is part of the national project Dwelling in a Time of Plagues, with organizational support from the Council of American Jewish Museums.

The first works coincide with the holiday of Sukkot. The exhibit will be open from 10 a.m. to 4 p.m., daily. Admission is free. Physical distancing protocols will be enforced.