Hollywood Rec Center could be used for shelter 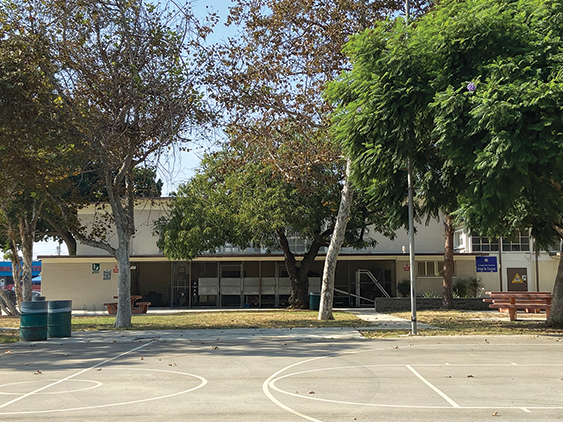 The grounds surrounding the Hollywood Recreation Center building are under consideration as a site for temporary housing for homeless individuals. (photo by Edwin Folven)

The city of Los Angeles is exploring the possibility of building innovative temporary housing for homeless individuals on the fields and basketball courts surrounding the Hollywood Recreation Center.

The City Council on Oct. 20 approved a motion by Councilman Mitch O’Farrell, 13th District, asking city departments to report on the feasibility of using the site along Santa Monica Boulevard between Wilcox Avenue and Cahuenga Boulevard for housing. The recreation center, aquatics center and surrounding park space have been closed since the COVID-19 public health emergency was declared in March. The city had already planned an extensive renovation of the recreation center’s main building, which houses a gymnasium and office, and the project is anticipated to be completed during the next two to three years. Because the entire property is currently closed during the pandemic and would remain closed for the renovation project, O’Farrell said it provides an opportunity to use the site to address one of the most pressing problems facing Hollywood – homelessness.

“The Hollywood Rec Center has been undergoing years of transformation. The next big transformation is to actually demolish the current structure. It’s among the oldest of the Department of Recreation and Parks’ facilities; it actually has a fireplace in the gym and that’s how they used to heat the building,” O’Farrell said. “My argument is since it is going to be out of commission, that we should use it as a temporary facility for people experiencing homelessness. If you go in a half-mile radius from there north and south, east and west, you have homeless encampments and homelessness. We could house, perhaps, all of the folks in the area temporarily. We wouldn’t be displacing anybody because the entire recreation and parks facility is going to be out of use.”

The councilman said the city is considering pre-fabricated, single-unit living spaces on the grounds surrounding the current buildings. A similar project is currently under construction in North Hollywood, he said. The units would be approximately 12 feet by 12 feet and would give each person an individual room, as opposed to the shared dormitory-type layout at other nearby temporary shelters. O’Farrell envisions up to 100 units on the property.

The project would be paid for with federal Coronavirus Aid, Relief, and Economic Security Act funding and other government sources. He said two of the most important and costly components of building a new project – water and electricity – are already available at the site. It’s just a matter of running new power lines to the units, O’Farrell added.

The aquatics center, which reopened in 2015 after an extensive renovation but will remain closed for the next couple of years during the main recreation center project, has showers and restrooms for occupants of the housing. The site would also have comprehensive case management to link people to resources and permanent housing, as well as 24-hour security, O’Farrell said.

The cost is unknown and is one of the things to be studied by city departments and included in a report on the overall project due back to the City Council at a future date. O’Farrell hopes to have the report back as soon as possible, and would like to have the units installed and open by early next year.

“Let’s solve two problems. Let’s build a state-of-the art recreation center and temporarily house folks who are currently declining rapidly on the surrounding sidewalks,” O’Farrell said. “It’s a humanitarian crisis. We really have to think broadly and look for every opportunity, especially when there is a match like this, to see what we can do. Let’s bring them under a roof and get them services.”