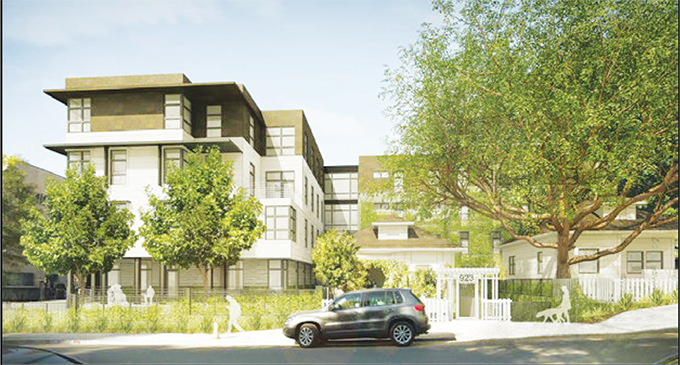 A proposal for a senior care facility on Palm Avenue heads to the Planning Commission in November. (photo courtesy of the city of West Hollywood)

Local residents currently living in the properties set for redevelopment and others had implored the commission to delay the hearing so they could mourn the sudden death of Duff Bennett, who had spearheaded opposition to the project for the past four years and died just days before the Oct. 15 meeting.

“A lot of people have reached out on this project. It’s one of the largest public inputs on a project I’ve seen in the last four years,” Commission Chair Adam Bass said. “Hearing all of the public speakers at the same time on [Nov.] 19 and then getting all those comments at the same time just makes it a cleaner process for everyone.”

In furtherance of developing the 33,460-square-foot project, which includes construction of a four-story senior housing facility containing 48 senior units with a one-level subterranean parking garage, Dylan Investment Properties plans to rehabilitate two single-family bungalows built in 1902 at 927 and 931 Palm Ave., which were designated as historic landmarks in 2013. A third bungalow, which is also over a century old and marked as the onetime residence of former LGBTQ activist Marsha Johnson, will be torn down as part of the redevelopment.

The staff report stated: “Staff supports the project, given that the proposed work will help preserve the cultural resources without impacting their integrity and provide a needed housing type in the city.”

The project’s most recent hearing before the Historic Preservation Commission resulted in a 3-3 vote on July 27. Commissioner Ed Levin, the project’s architect, recused himself from the vote, as he had for all commission discussions on the project.

Since Levin originally filed the project application with the city on March 22, 2016, the project has twice been heard by the Historic Preservation Commission.

The proposal includes demolishing the existing residential units at 923 N. Palm Ave. along with all non-historic accessory structures and rear additions. The bungalow at 927 Palm Ave. will be transformed to serve as a reception area for the facility, and the bungalow at 931 Palm Ave. will function as a detached residence, for a total of 49 senior units. The new four-story, L-shaped building is envisioned to create a backdrop for the two historic bungalows, according to the staff report.

“Unfortunately, not much has changed to lessen concerns that both the Historic Preservation Commission (HPC) and the community have previously raised about the massing, the height, the look and feel, and the impact on cultural resources and on the environment of this project in West Hollywood’s historic Old Sherman neighborhood,” the West Hollywood Preservation Alliance wrote in anticipation of the meeting.

WHPA Board President Victor Omelczenko highlighted three specific issues the alliance had with the project: it “skirts” existing standards for new construction within the boundaries of historic properties, the proposed L-shaped main building “looms” above the historic bungalows and removes trees and open spaces that have “characterized the Palm Avenue neighborhood since 1902,” and the Historic Preservation Commission has now voted twice against the project “and the preservation community agrees that the new development needs some serious retooling.”

“The houses, the landscape, the open space, the kind of environmental setting of this old Sherman neighborhood where there’s still three contiguous parcels that are over a century old reflecting the kind of history that West Hollywood sprang from, that’s the concern of the Preservation Alliance,” Omelczenko said.

Following the Oct. 15 meeting, Dylan Investments Vice President James Stevens underscored that the project is intended to fill a “much needed” void of supportive senior housing and that the bulk of residents would be people who currently reside in West Hollywood.

“There’s currently a lack of assisted living options for older adults for people in the community,” he said. “The idea for us is to bring the culture of West Hollywood into our buildings.”

“We’re trying to do a positive thing,” he added. “We know there are at least 2,100 [West Hollywood residents] over 65 – [our project’s] supply is 70 beds; that’s a very limited supply for the demand that’s going to be there or is coming.”

Stevens said they planned to keep the developed property “forever” and would partner with Caden Senior Living, which is based out of Scottsdale, Arizona, to run the facility. In addition, he said that they would specifically market the facility to local residents.

While Stevens said that at least two trees would be removed from the site – with replacement trees added – a century-old tree at the front of the project would remain.

“We’re adding more than we’re removing,” he said, noting that they would be working with a landscape architect to further create a “beautiful garden” in the back that would be particularly helpful in elevating seniors’ moods.

In recommending the project, the West Hollywood staff report highlighted the community opposition.

An Oct. 12 email sent from Eric Bladh representing the residents of WeHo North-Santa Monica Neighborhood opposed the project on the grounds that it violated the Secretary of Interior’s Standards for Rehabilitation.

“We cite page 156 … ‘Ensuring that the addition is subordinate and secondary to the historic building and is compatible in massing, scale, materials, relationship of solids to voids, and color.’ Not recommended is ‘Constructing a new addition that is as large as or larger than the historic building, which visually overwhelms it,’” he wrote. “We the residents believe this to be explicit prohibition.”

In fact, many written comments opposing the project highlighted the diminution of the area’s historic character.

Josh Cohen, who lives adjacent to the proposed project, said he believed it would “severely damage the neighborhood feel and charm” and noted that Palm Avenue residents have consistently opposed the proposal.

An Oct. 13 email from Manny Rodriguez, vice president of the West Hollywood West Residents Association, further supported the project, writing: “The assisted living facility proposed at 923-931 Palm Ave. is a much needed and worthwhile development that will also enhance, rejuvenate and add new relevance to the historic bungalows currently on the property.”

In anticipation of the vote to delay the hearing, Commissioner Lynn Hoopingarner said that postponing the hearing would be the “fair and balanced” decision.

“This would be the first and only opportunity [for the neighborhood group] to present their position to the Planning Commission in a public hearing,” she said.

If approved by the Planning Commission next month, Stevens said he expected it would take two years to complete the project.

Hollywood Rec Center could be used for shelter